A pair of recent studies concluded that little or no active or effective shopping around is getting done. Both are described on the blog of the journal Health Affairs, which I don’t subscribe to. So in the  spirit of full disclosure, I haven’t seen the actual studies; I’m reluctant to pay for them.

We’re not sure why researchers don’t see this as real: Obviously they haven’t talked to as many people who do this as we have. Maybe also it’s because if you’re healthy and are comfortably well-off, it’s not an issue for you and so you see the entire topic through your own prism. Or it could be that you’re like the average American, and “you spend around $1,000 per year on health expenses. You likely don’t often have to think about your deductibles and itemized health care costs,” as detailed in this Atlantic piece recently.

The studies, and what I think about them

Here, briefly, are descriptions of the studies.

Study 1: “Policy makers have assumed that the increase in the number of Americans holding high-deductible insurance plans would be accompanied with a rise in patients seeking to identify lower-cost providers. Ateev Mehrotra of Harvard Medical School and coauthors conducted a nationally representative online survey of approximately 3,000 nonelderly US adults in early 2015 who reported having received medical care in the past twelve months. The authors found that a large majority (72 percent) of respondents said that their out-of-pocket spending played an important role in determining a choice of provider (see the exhibit below). However, only 13 percent of those surveyed reported seeking information about their expected spending before receiving care, and just 3 percent had compared costs across providers before their medical visit. The most frequently cited reason (77 percent) for avoiding price shopping was not wanting to switch their doctor. Also, 75 percent of respondents said that they did not know of a price-comparing resource, and 53 percent said that they would use a website to price-shop if one were made available to them. The authors conclude that price transparency laws and online tools have had a limited impact on health care price shopping—and new efforts might need to be targeted to selected clinical contexts that are suitable for shopping.”

We are always cautious of the “nationally representative online survey” methodology, because we think that tends to oversample on men. Women know much more about health care costs (here’s my blog post about that), so if you’re asking an evenly divided group, you’ve got a lot of men who don’t get the issue. Also, are people embarrassed to tell Harvard researchers they’re shopping around?

This would also oversample on people with internet access. That would tend to skew toward higher-income individuals, we think. We know from our work in New Orleans that we’re reaching people with no internet access via our partners at WVUE FOX 8 Live news, and those people are shopping — and they’re upset about health prices.

This also might well oversample on those people in the Atlantic piece — the average Americans spending around $1,000 every year. If they were recent consumers of health care, was that for a flu shot? A sore throat? Or a $5,000 MRI?

Also, and perhaps this is the most important point in the research, most people don’t know that prices vary by a lot. They also don’t enter the health care marketplace expecting to get their pockets picked (though maybe they should). If you look  at the survey results in this chart, picked up from an email about the work, you’ll see that 40 percent of those surveyed did not know such variations existed. So a randomized survey is going to pick up a lot of people who are unaware of the problem — and therefore unaware of the need to find a solution.

Why do the results vary so much?

I asked Mehrotra, who I met at a thinkfest last year, why his study differs so from our findings, and he replied in an email:

“I’m unsure why are findings are so different. They told us they wanted to shop for care so I’m not sure they were embarrassed. They just said they found it very difficult to do so. Tools were difficult to use, didn’t want ot override their MD’s recommendation.

“This echoes what we found in our other article. We studied their actual behavior after they were offered a tool and we saw little action. This echoes another article we published last year as well as several other studies that have rigorously assessed the impact of offering price transparency tools. We are not seeing much impact.

“One thought is that the tools themselves are all crap. We have studied Castlight’s tool and Truven’s tool, but maybe that is the difference.

“But my own thought is that the incentives created by high deductible plans are not conducive to price shopping. Most of the spending is for people who hit their deductible/on services that exceed the deductible. I’m more enthusiastic about programs such as tiering/reference pricing which have been demonstrated to drive people to lower priced facilities.”

If you surveyed more women, we think the results would be very different. Also, the size and shape of deductibles and the application of sticker price/negotiated price until you meet that deductible threshhold of, say, $5,000 has meant people’s experiences are different.

Also, if you gave them our tool, we think the results would be very different. 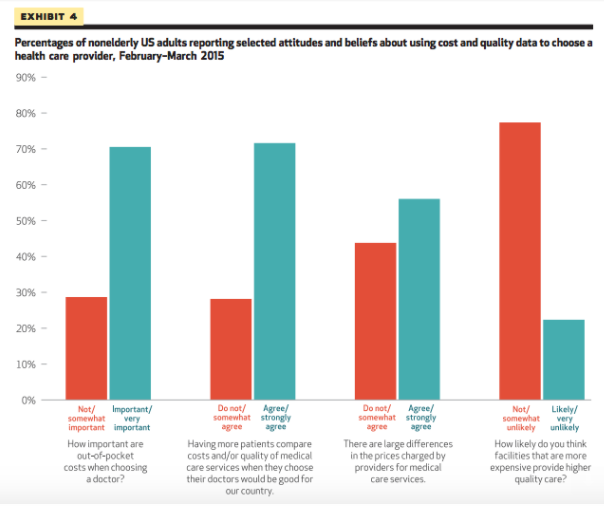 Study 2: “Price transparency tools, usually in the form of apps and websites, allow patients to compare health care service prices and expected out-of-pocket spending across local providers. Sunita Desai of Harvard Medical School and coauthors evaluated the impact of offering Castlight, a commercial price transparency product, to members of the California Public Employees’ Retirement System (CalPERS). The authors examined members’ insurance claims data for the first fifteen months of Castlight’s availability. They found that only 12.3 percent of those offered the tool had used it—and use of the tool was not associated with lower spending on a set of services suitable to price shopping on the tool, including lab tests and office visits. Their findings support the emerging evidence that introducing price transparency tools has not made it easier for patients to price-shop for their health care.”

I haven’t seen the Castlight tool for some time — it’s available only to people whose employers pay for it, so it’s hard for us to assess it. We don’t know how the information is displayed, or what kind of savings are available. But we are able to assess our tools,  and we have been able to save people significant amounts of money — using our data and our tools, this woman saved $3,786, and this woman saved $1,205, for starters. Here are some other people shopping for health care.

People do shop. Listen up: Here are their voices.

So, leaving academia and returning to the real world, here are some fresh comments collected from Facebook and elsewhere from people viewing links to my recent Forbes blog post — about how people can often save money by putting away their insurance card and asking to pay the cash or self-pay rates.

People are shopping, and they are saving thousands of dollars. Here are some of their comments.

“Not to mention that private tests can be a lot easier to schedule. I just got a DEXAscan done for $97, two days after I called.”

“I ran into this some years ago when I wanted to buy a second BiPAP machine for backup and travel. Since I wasn’t going to ask for or get insurance reimbursement for another machine, I called the company that supplied my current one through my insurance plan to ask for a price. They told me straight out to order it from an online vendor at a much lower price, since their contract with the insurer didn’t allow them to sell it to me for less than the amount they charged the insurer (which covered some maintenance as well). I ended up paying about $1,300 instead of $6,000.”

“I had a situation once where my clinic (the only option for a cardiac device clinic staffed by RNs and an EP within 45 miles of my house) was out of network for Anthem/BCBS. I couldn’t get out of network approval from insurance, because they had a 50 mile rule. Until the clinic got the contract negotiated and were back in network, they reduced fees, down to the self pay amount.
I had a HDHP at the time. I was used to paying 100% of costs until I met my deductible (then nothing after that- the oop max was equal to deductible). The reduced fees during this period *saved* me money….

“I considered not using my insurance after that, but I had that nagging thought ‘but it won’t apply to my deductible’ so I didn’t.
Unfortunately life had taught me that exceeding my deductible was a very realistic possibility I had to plan for. I don’t know that I would choose the same now.”