How much does a brain MRI cost, or the triple whammy: Co-insurance, high deductible and a sick kid

The community member’s report was enough to make you cry. The biggest problem that leaped out at us: A 50 percent co-insurance stipulation in her insurance plan.

For an MRI of the brain with and without dye, CPT code 70553, at Virtua Voorhees, these were the prices:

Her comment: “This appointment was made thru Childrens Hospital of Philadelphia and performed at a satellite office in Voorhees. Same MRI was done 12/19 at CHOP and billed at $8796.54 and I had to pay $597.00!!”

1. Can you tell us about the circumstances?

2. Why was the second one done at a different hospital? Did you ask for the cost in advance — or are they out of network, or something else odd?

Thank you very much for your help!

“Jeanne: I got to you because I saw something on CBS news. It was on for a few days and one of the people they interviewed actually had the same insurance. I have attached the summary of our insurance. We have a very expensive monthly payment of over $2,000. We also put over $7000 into the hsa which has been exhausted already.
As far as your questions (1) I am assuming you want to know why my daughter needs mris? She had hydrocephalus and a etv (endoscopic third ventriculostomy) was performed to redirect the fluid so it could drain. There is a tumor that was causing the hydrocephalus. The tumor is an Astrocytoma which is a
Low grade glioma in the brain stem. She now is followed by having mris to make sure the tumor isn’t growing.

What we learned: Co-insurance, yikes

Indeed, her plan has a murderously high 50 percent co-insurance. That’s a little-known trap in some insurance plans.

After you meet your high deductible, you might be subject to co-insurance, which is a percentage you pay of the price, depending on how your plan is written.

It might be a percentage of the sticker price, or a percentage of the allowed price — depending on the agreement the doctor, hospital or lab made with the insurance company. We have heard of 10 percent, 20 percent and 30 percent co-insurance — but 50 percent is high. (See her plan description below.)

For her, preventive care is free, but any sick-person visit incurs the 50 percent co-insurance

What’s even more puzzling in her case is that the Children’s Hospital of Philadelphia MRI was less expensive, and the satellite one was more expensive — like four times more. Children’s Hospital doctors do provide some services at Virtua Voorhees, but Virtua is separate from CHOP.

1. This is via your employer, through Oxford, correct?
2. How many family members are covered on this plan?
3. You were completely surprised by the disparity in prices, I take it? Did you have any warning that the second would be so pricey?

She replied: “Yea that is fine if you use this info. Yes this insurance is through my husband office. His is a lawyer and he has a small practice and we get this insurance though a broker. It is a huge expense. This plan covers me, my husband and 2 of my children – ages 16 and 22. We are in the process of switch to an organization so that we can be with a Consortium to try to lower our costs. Next year we may be with horizon blue cross and blue shield but probably paying around the same.

“I was not aware that the cost would be so much because I thought it would be about the same as the one in December. When I called Virtua after I received the bill, the girl would only say we charge different rates. My broker also got no where with them either.”

Her plan document: Deductible and co-insurance 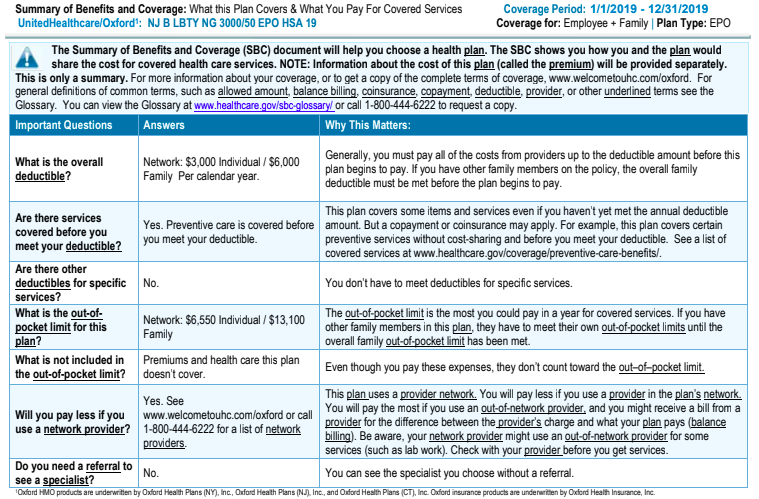 Two pages of EOB for the second MRI 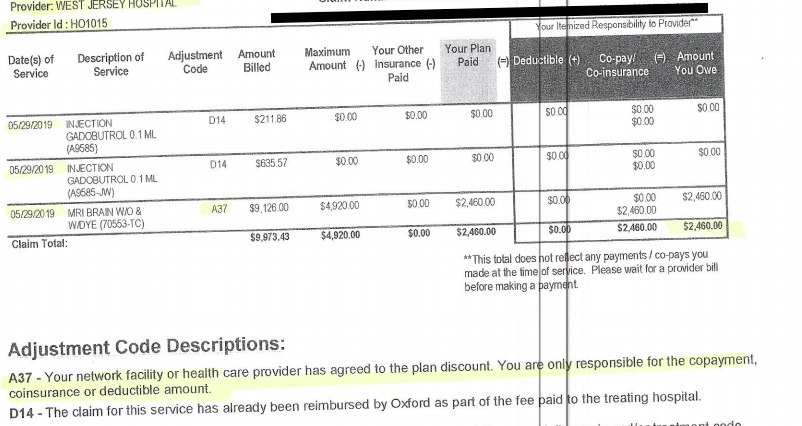 Two pages of EOB for the first MRI