How much does Eylea cost? Or how to use copay waivers to increase sales: Whistleblower Law Collaborative 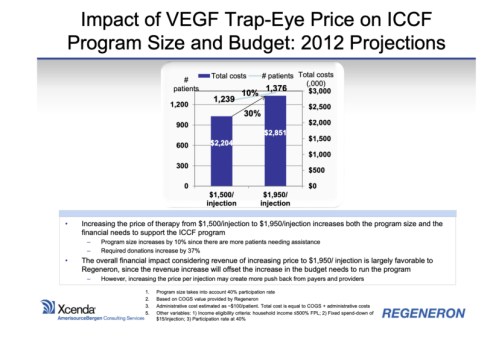 “The Massachusetts U.S. Attorney’s Office announced that it will sue drug manufacturer Regeneron Pharmaceuticals for health care fraud,” David W.S. Lieberman writes over at The Whistleblower Law Collaborative. “The False Claims Act complaint alleges that Regeneron paid tens of millions of dollars to induce prescriptions for its drug Eylea. Regeneron’s scheme to use a third-party foundation to hide copay waivers is a growing focus of government prosecutors.  Below, we explain what Regeneron did, and why it is illegal. According to the complaint, the company funneled tens of millions of dollars to a foundation called the Chronic Disease Fund.  As a result, the foundation paid the copays for patients of Eylea. Before Regeneron paid these millions, it confirmed that the money would go only to its drugs, and not those of competitors. Moreover, Regeneron explicitly analyzed the return on investment, or ‘ROI,’ of these alleged donations. Regeneron hired Xcenda, a division of AmerisourceBergen, to quantify how donations to the foundation would return Medicare dollars to Regeneron. As the slide indicates, Xcenda advised Regeneron to increase the price of Eylea to $1950 per injection.  But it that increase required Regeneron to up its foundation funding by 37%. However, even spending more on the foundation, Xcenda advised that the revenue increase would offset the increases to foundation payments. Later, in calculating how much to donate to the foundation, Regeneron financial staff concluded that 2013 donations would result in nearly $200 million in additional sales.  They considered this a 465% ROI.” David W.S. Lieberman, “DOJ Sues Regeneron for Copay Fraud,” Whistleblower Law Collaborative.