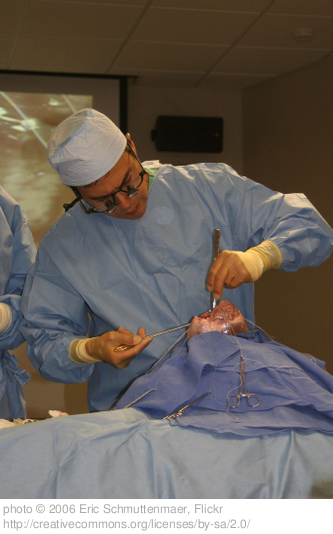 Costs of cardiology: “If you ever want a reason to question your cardiologist very closely when he or she recommends you undergo an angiogram, the imaging test that precedes an angioplasty or stent, read this paper by Grace Lin and Rita Redberg, cardiologists at the University of California, San Francisco. Lin and Redberg conducted three focus groups, where they gathered groups of cardiologists and asked them to talk about three hypothetical patients. All three patients had heart disease, but none would benefit from getting an angioplasty or stent – and that’s according to guidelines created by cardiologists themselves. Nevertheless, nearly all of the cardiologists who participated said they would go ahead and give the patients a stent or angioplasty. They overestimated the benefits of their procedures, and ignored the evidence from multiple studies.” Shannon Brownlee, “Less is More,” The New Health Dialogue, from the New America Foundation.

Costs in the U.S.: “Below is a table that I use in my health econ classes. It is now a little outdated, but shows that our G7 peers spend half as much as we do on healthcare but go to the doctor twice as often and spend twice as many days in the hospital as we do. This suggests to me that the big difference between the US and the other G7 countries is the prices. There are some caveats: we have more outpatient care, our use of technology might be greater, we might have a different (younger) population, and so on. While accounting for these differences may reduce the magnitude of the difference in costs, the central story, I think, remains true.” John Nyman, Professor of Health Policy & Management, University of Minnesota School of Public Health, on The Incidental Economist blog.

Cost of drugs: “If [the merger of drug giants Express Scripts and Medco] doesn’t draw fire from the antitrust division of the U.S. Justice Department and the Federal Trade Commission, then those agencies aren’t paying attention. Express Scripts and Medco combined accounted for 1.7 billion prescriptions in 2010, worth about $110 billion in revenue. That’s about a third of the total prescription drug market.” Merrill Goozner, Gooznews.com

The companies claim this merger will give them increased clout to negotiate better deals with drug companies. In theory, yes. But as we’ve seen many times in the past, prescription drug benefit managers spend more time squeezing pharmacies with their slim retail margins than they do calling questionable drug industry practices into question

Cost of cancer: “The next time I see my oncologist, my main complaint will be not the side effects of my cancer treatments, though I have plenty of those, but the impossibility of finding out how much those treatments will cost before I have them. In 2006, I was diagnosed with breast cancer. I was 29. The cancer was small and, in terms of surgery and immediate recovery, things went well. But my five-year follow-up treatment has been an endless loop of side effects that generate their own costs and — often just as stressful — a dizzying accumulation of medical debt.” Mimi Ferraro, Bloomberg News.

Cost of insurance: “Nationwide, private-sector employees with single coverage contributed 21 percent of the cost of their health insurance and employees with family coverage paid 27 percent, according to the latest News and Numbers from the Agency for Healthcare Research and Quality AHRQ. According to data from the Federal agency: Health insurance premiums nationwide averaged $4,940 for single coverage and $13,871 for family coverage in 2010. Among the 10 largest states, the annual cost of single coverage ranged from $4,669 in Ohio to $5,220 in New York and family coverage ranged from $13,083 in Ohio to $15,032 in Florida.” AHRQ News and Numbers: How Much Do Employees Pay for Health Care Coverage? Depends on Where They Live.

Cost of exchanges: “It seems like a simple idea: create new marketplaces, called ‘exchanges,’ where consumers can comparison shop for health insurance, sort of like shopping online for a hotel room or airline ticket. But, like almost everything else connected with the health law, state-based insurance ‘exchanges’ are embroiled in politics.” By Julie Appleby,  A Guide To Health Insurance Exchanges, Kaiser Health News.