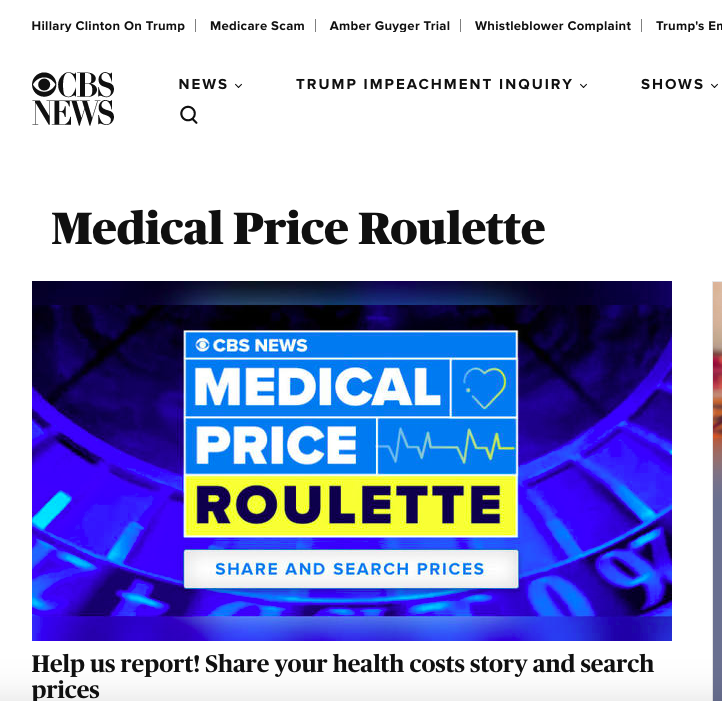 We launched our CBS News partnership in September 2019, under the name “Medical Price Roulette.”

Here’s the first story from Anna Werner, national consumer investigative correspondent at CBS This Morning.  She interviewed Frank Esposito, who faced close to $700,000 in medical costs after receiving surgery after an emergency room visit for a herniated disk. He says doctors told him he could have been partially paralyzed if he did not have immediate surgery. He had insurance, but just weeks after the surgery, the bills came rolling in. His insurance company claimed the surgery was not medically necessary. He has hired a professional to fight back and has tapped into his retirement account to pay bills. Just hours after this story aired, Gov. Andrew Cuomo of New York called CBS to let them know he would resolve Esposito’s bills and institute policy changes to help others in similar situations.

Our work has been featured on CBS This Morning (7-9 A.M. ET), CBS Evening News (6:30-7 P.M. ET) and the CBSN streaming network, as well as the CBS  News Radio Network and other CBS properties.

We’re using shoe-leather reporting, crowdsourcing, data journalism and other tools to tell people what stuff costs. We started out with a survey of cash or self-pay prices in two sample cities — Dallas and San Francisco — and we’re asking people across the nation to share their prices with us to help in our reporting.

“Medical Price Roulette” is exploring the problems and solutions surrounding the lack of transparency of medical costs charged by hospitals and providers and why they vary – often dramatically. We started by collecting the prices of 30-35 common, “shoppable” medical procedures in those two metro areas and discovered drastic variations we’ve seen in other cities across the nation. Here’s the teaser they ran on Sept. 20.

Here’s the project page, which collects all of our work.

“Consumers often complain of suffering from health care bill sticker shock after undergoing a medical procedure,” said Kimberly Godwin, CBS News’ Executive Vice President of News. “This important series will take a deep dive on this topic and shed light on why the same test can cost different prices, why medical bills are hard to understand and what steps people can take to avoid being surprised by medical bills in the future.”

Hundreds of people have shared prices, and thousands have searched our database.

This is a continuation of our national partnership strategy at ClearHealthCosts; to read about all our partnerships, go here.

Aug. 13: “Wisconsin software company delays return to the office plan till the end of the year.”

July 10: “COVID-19 tests are supposed to be free, but these people got bills for thousands of dollars,” Anna Werner.

June 30: “We won! Our CBS partnership is the top network public service journalism project in the nation!” Jeanne Pinder.

May 28: “Government guidance raises doubts about tests, even as their use becomes more widespread,” Anna Werner.

March 23: “How scammers are trying to exploit the coronavirus pandemic,” Anna Werner.

Feb. 20: CBS This Morning, “Alabama couple struggling after hospital sues over medical debt: ‘I wish you’d have let me die.'”

Dec. 4: CBS Evening News, “Breast cancer survivors hit with unexpected costs for diagnostic mammograms.”  After the segment ran, we received hundreds of emails and shares from women with similar problems, and charges ranging into the thousands of dollars. Many of them said they’d stopped getting mammograms because the cost was so high.

Dec. 4: CBS This Morning, “‘I was being penalized for having breast cancer’: Survivor fights with insurance over follow-up tests.” After the segment ran, we received hundreds of emails and shares from women with similar problems, and charges ranging into the thousands of dollars. Many of them said they’d stopped getting mammograms because the cost was so high.

Oct. 31: CBS Evening News, “The hidden cost of mammograms.” After the segment ran, we received hundreds of emails and shares from women with similar problems, and charges ranging into the thousands of dollars. Many of them said they’d stopped getting mammograms because the cost was so high.

Oct. 31: CBS This Morning, “Women shocked by cost of mammograms: ‘I wasn’t expecting a bill at all.'” After the segment ran, we received hundreds of emails and shares from women with similar problems, and charges ranging into the thousands of dollars. Many of them said they’d stopped getting mammograms because the cost was so high.

Sept. 27: Jeanne Pinder for CBS News, “How to find out health costs in advance.”

Sept. 26: Anna Werner, CBS This Morning, Frank gets relief from bills, and also Aaron Carroll discusses costs with Gayle King, Anna and others.

Sept. 25: CBS This Morning, “Medical bills jump from $220 to $4,000 a month – for a treatment her life depends on.” After the segment ran, her insurance company, GEHA, reached out and is negotiating with the hospital to get the lower price that other payers were getting, as well as making an exception for her to buy prescriptions at a more convenient pharmacy and in a more user-friendly package.

Sept. 25: Anna Werner and Jeanne Pinder, Facebook Live: What to do about healthcare pricing concerns.”

Sept 24: CBS This Morning, “After her miscarriage, she received two rounds of ultrasounds. Why did one cost ten times more?”

Sept 23: CBS This Morning, “Back surgery saved him from paralysis. Then the bills arrived: over $650,000.” After the segment ran, Gov. Andrew Cuomo of New York called the CBS office and eventually made this man’s bills evaporate, as well as instituting changes in the New York State surprise and emergency billing law to add more consumer protections.

Sept 23: Jeanne Pinder for CBS News, “Ways to save on health care costs.”

Sept. 23: Jeanne Pinder for CBS News, “How to read a medical bill or explanation of benefits.”

How you can contribute

DID YOU SAVE money with information from ClearHealthCosts or “Medical Price Roulette”?  Tell us by email at info@clearhealthcosts.com or healthcosts@cbsnews.com.

DO YOU HAVE PRICES to share to help build our community-created guide to health care? Or are you looking for price information?

Click over to our CBS Medical Price Roulette interactive software at CBS News. Search our prices in our CBS-focused partnership. For non-CBS shares and searches, here’s the search and share page on our national ClearHealthCosts site.

This page has a sample spreadsheet showing the data that will let us include your prices. Download, fill it out and return to us at info@clearhealthcosts.com or healthcosts@cbsnews.com.

Email us with any questions.

To discuss a potential partnership, email us at partner@clearhealthcosts.com.

About our data and our work The information in our database comes from several sources. First, our journalists conduct a direct survey of local providers to collect cash or self-pay prices for a range of 30-35 common, “shoppable” procedures. Through our interactive software tool, we encourage community members to add to the site by sharing their pricing information from bills or “explanation of benefits” statements. We also include data on the Medicare reimbursement rate, what the government pays for a procedure in a given area under the Medicare program for older Americans, since that’s the closest thing to a fixed or benchmark price in the marketplace. That figure is computed via a formula used to price 8,400 procedures in 90 separate geographical areas in the system used by the federal government.

More information about our nationwide partnerships is collected here.

Articles highlighting our data and our media partnerships have appeared in the Harvard Business Review and in JAMA Internal Medicine.  We’ve also been featured in The New York Times, The Wall Street Journal, The Los Angeles Times, NPR, USA Today and elsewhere. To read more about our work and partnerships, visit our media page.

While we do not have every price for every procedure at every provider across the nation — that data does not exist anywhere — we do have a “community-created guide to health costs” where people can share and search health cost data, as well as explanation and interpretation of the data from our news partners.

To discuss a potential partnership, email us at partner@clearhealthcosts.com.