The view from the emergency room: A doctor’s story 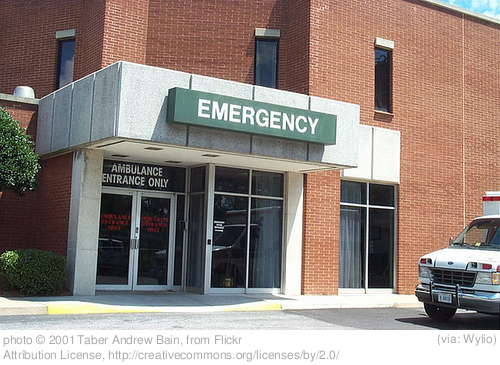 “We went from being an E.R. doing the best we can, to having a chief executive saying we have to see at least 60 patients a day in here” in the 12 hours we’re open, the doctor said.

My friend –- from now on, The Doctor — is an emergency room doc at a major metropolitan area hospital, and was giving me a snapshot of  the  business. What does it look like in the emergency room? And how is the business changing? Here’s a look.

The Doctor notes  that there’s a big trend among  colleagues and acquaintances to open up stand-alone urgent-care clinics. Some are straight urgent care, some are giving flu shots, or some have contracted with institutions — for example, a college that will send all its students after-hours to an urgent-care clinic.

These urgent-care clinics, The Doctor said, are run by former staff doctors. Most of them take only cash,

or insurance. They won’t treat you and bill later. As a private business, these clinics are allowed to refuse patients – unlike an emergency room, which is run by a hospital and can’t turn people away.

Urgent-care places don’t offer CAT scans and such  — they  really tend to treat just  simple stuff. Most urgent-care clinics have simple equipment —  an X-ray machine, blood and urine analysis equipment, an EKG machine and so on. A case requiring  anything more complicated needs to be sent elsewhere.

Are these clinics taking business away from emergency rooms? Well, probably. It’s much cheaper for an insurance company to send someone to an urgent-care clinic than a hospital, The Doctor noted.

A kid with a sprained wrist splinted in a hospital, X-ray and all? The bill might be $1,300, The Doctor said. But an urgent-care clinic? A couple  hundred bucks.

The Doctor added that some clinics do detox from oxycontin, for example. others do clearance physicals for the fire department – branching out from the standard urgent-care definition. And in cities, drugstores like Duane Reade in New York offer walk-in clinics — in this case, named Dr. Walk-In — that happen to be the doctor of choice for many busy (and uninsured) people.

“With primary care doctors, you wait, it’s crowded, and you don’t spend that much time with the doctor,” The Doctor said, speaking from experience. “There’s a huge need for urgent care. People who have coughs, who have a laceration, who need a note for work — who’s going to do that? If you have an urgent-care that will see you quicker and take care of you quicker for stuff that you could do at a hospital, I have to think the insurance companies love it.”

In fact, I’ve noticed that my insurance card has changed to reflect this trend. It used to list three co-pays: primary-care doctor, specialist and emergency room. Now there’s a fourth co-pay: urgent care, which is the same as primary care ($20) and less than the emergency room ($50, but you should expect extra charges).

Do you have experience with an urgent-care clinic to share? Write us at info [at] clearhealthcosts [dot] com. Thanks!