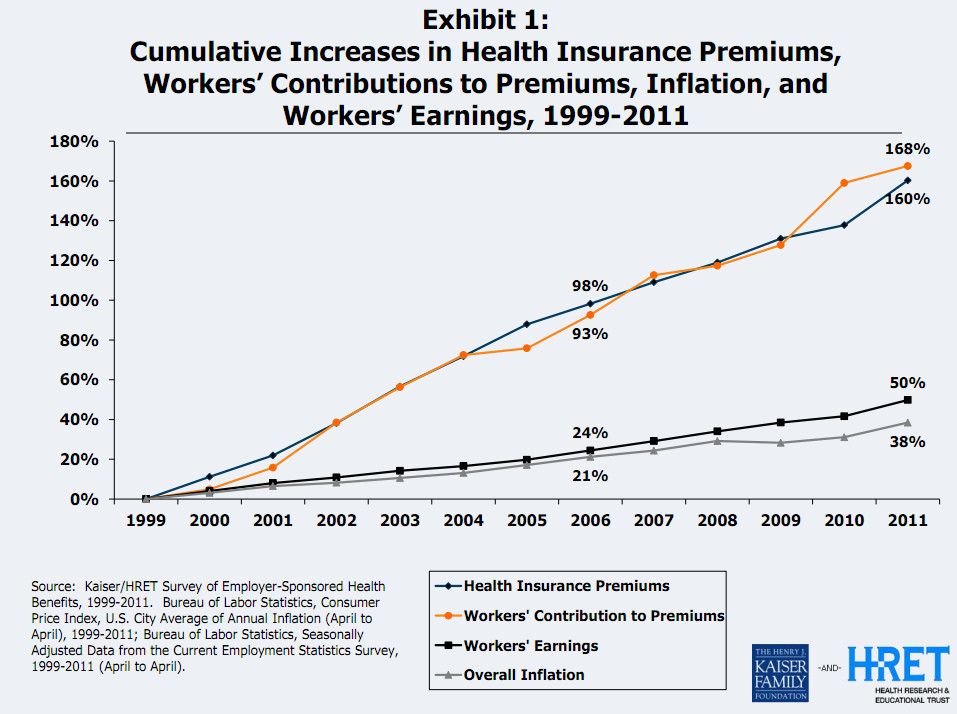 113 percent. That is the increase in the average family health care premium since 2001, according to a new report released this week by the Kaiser Family Foundation. Here are some other numbers we plucked from the Employer Health Benefits 2011 Annual Survey:

Several outlets took a look at the numbers, including the New York Times, the Washington Post, and even the White House.

The data from the Kaiser Family Foundation adds to a slew of recent reporting and data about the burden of health care costs on families.

California’s Center for Health reporting recently did a series on the health care debt amassed by individuals and hospitals. In one piece that focused on patients, the Center showed how medical debt can spin out of control:

“Because of the recession and unemployment certainly there are those that are having more medical debt and then using what they feel are the options to cover those debts” explained Rob Quinlan, a debt counselor with the nonprofit ClearPoint Financial Solutions. People put off bill payments to pay food and rent, or turn to credit cards and payday loans to cover medical expenses, digging ever deeper into the red.

“Once you have medical debt that is ongoing it can be a domino effect,” Quinlan said.

Millions of Americans already face these choices, and the number is growing. A study by the Commonwealth Fund last year found that:

Health care has been an issue for years, but time and again, research is telling us the situation is shifting fast–and in the wrong direction.

One health-care analyst, Merrill Goozner, has this thought: “The private insurance industry is covering fewer people and facing just a 4 percent increase in costs. Yet it is raising premiums 9 percent. No wonder profits are rising smartly.”

Thoughts? Feedback? Drop us a line at info [at] clearhealthcosts [dot] com.