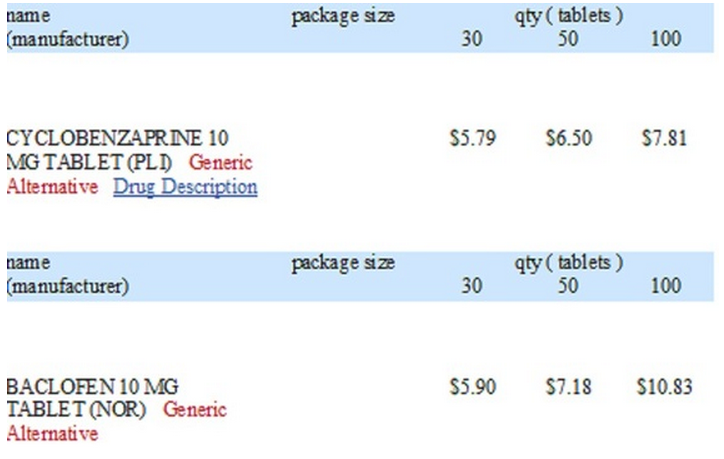 GUEST POST SUMMARY: Many insurance plans make you go to an approved doctor at an approved hospital for approved procedures and take approved drugs. Even doctors often don’t have much say in this. We hand all this control to insurance companies and they use it, they say, to control their own costs. Is that all they use it for?

We bring this to you courtesy of Dr. David Belk, a California internal medicine doc who has a deep interest in health-care pricing, and who wrote this blog post at Huffington Post, from which we re-post with permission. Click through for more, or …

About a year ago I prescribed cyclobenzaprine, a commonly prescribed muscle relaxant, for a patient who had recently strained her back. About two hours after she left my office, Walgreens (her pharmacy) faxed me this message. (That’s right: Doctors still use fax machines.)

According to Walgreens, the patient’s insurance (Healthnet) didn’t “cover” cyclobenzaprine. But they were willing to cover baclofen, another commonly-prescribed muscle relaxant, for a $12 copay.

This denial seemed especially odd to me since cyclobenzaprine has been generic for many years and there’s clinically very little difference between it and baclofen. How could this be an issue of cost? I decided to look up the price of each medication at Costco.com to see if maybe the price of cyclobenzaprine was a lot more than I remembered. Medications that cost less than the copay

As you can see, both medications cost less than the copay, meaning the insurance company wasn’t actually being asked to “cover” anything. In fact, the one I prescribed was the cheaper of the two. So why were they preventing my patient from getting it? And even though my patient could have bought the medication herself — for less money than the copay her insurance plan required, she couldn’t do it at Walgreens. At most chain pharmacies, if you show them an insurance card, you’re forced to play by your insurance company’s rules.

That isn’t the only time this has happened. Cigna also sent me a letter stating they won’t cover cyclobenzaprine, Blue Shield won’t cover hydroxyzine (which another one of my patients had been taking for years), and insurance companies have also sent me denials for pantoprazole and metoprolol tartrate — all very inexpensive generic medications. In every case the message was the same: The patient’s insurance plan doesn’t “cover” this medication.

Well then, why the denials?

But if these medications don’t cost very much, if they don’t cost the insurance companies anything, why the denials? And what does this tell us about the role of health insurance in our lives?

Health care is the only industry in the U.S. where we go through an insurance company to purchase nearly everything no matter how trivial or mundane. You don’t use your car insurance when your check-engine light comes on, but you use your health insurance to pay for a blood test. Why?

We’ve become so dependent on insurance companies for all of our health care expenses that most of us (including doctors) have lost track of what anything in health care actually costs. Not knowing what you pay for something is a big disadvantage. The more you depend on an intermediary (like a health insurance company), the more money they can extract for the dependence. And keeping you confused makes it harder to break away. So, for example, if they want to keep us going through them for every possible service or product in health care, it might help to make us think everything in health care is far more expensive than it really is.

By refusing to cover a medication, the insurance company sends both the doctor and patient a message: “All of your medical costs are very high. You need us.” It works because we don’t know when a test or medication is actually about the same price as an oil filter. They use this illusion of “high cost” to justify the price of their premiums. As long as neither doctors nor patients are willing to look up the actual price of these products, no one will see through their deception. Clever, aren’t they?

You can’t really blame an insurance company for trying to manage its own costs, even if they play a bit of hardball to keep people from making poor economic choices (like using an expensive name brand medication when the generic is just as good). But we’ve seen that when we stop watching, they start to extract money directly from the source — patients — by getting people to overpay for medical services. And in these examples, they’re refusing a medical service altogether, and not for any good reason. Health insurance companies will directly interfere with your medical care just to play a game and deceive you about the real cost of a medication. How’s that for a service?

We bring this to you courtesy of Dr. David Belk, a California internal medicine doc who has a deep interest in health-care pricing, and who wrote this blog post at Huffington Post, from which we re-post with permission.