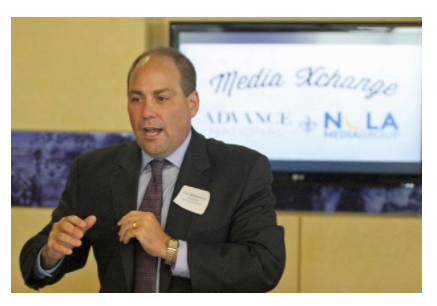 “Last summer, I made a pledge to you that we would build a progressive, dynamic and forward-thinking media company that would serve the New Orleans community for generations to come,” writes Tim Williamson, president at NOLA Media Group, featuring the recent achievements of his staff, including our “Cracking the Code” partnership — right up there with their partnership with The New York Times. “Today, after eight months as the president of NOLA Media Group, I want to update you on our progress.Using The Times-Picayune’s 180-year tradition of journalistic excellence and NOLA.com’s powerful digital platform as a foundation, we have introduced an array of New Orleans journalism initiatives designed to engage and inform our community everywhere we publish: print, digital, social, video, audio and events.So far:
300 for 300: In January, we launched 300 for 300, the NOLA Media Group’s two-year initiative to celebrate the city’s 2018 tricentennial by acknowledging people and moments that inspire and connect us. The effort, led by reporter Mike Scott, has chronicled 126 moments and generated nearly 2 million page views so far.
Expanded Opinions section and Editorial Board: The conservative voice of Tim Morris joined Jarvis Deberry, Terri Troncale, Mark Lorando, David Francis and myself on the Times-Picayune Editorial Board.
Louisiana Coastal Watch: In March, we added two full-time reporters, Tristan Baurick and Sara Sneath, and welcomed back former Times-Picayune reporter and columnist Bob Marshall, to join award-winning environment reporter Mark Schleifstein on our newly formed Louisiana Coastal Watch team. That team has begun a partnership with The New York Times to explore the effects of coastal erosion and sea rise on the communities of south Louisiana.
Cracking the Code: In April, we joined our partners at FOX 8 News to launch Cracking the Code, an ambitious investigative project that helps consumers navigate the murky waters of modern day health care pricing. Powered by reader-submitted medical billing data and the reporting of Jed Lipinski and Lee Zurik, the series has empowered consumers with new tools for reducing the cost of numerous common medical procedures.” Tim Williamson, “Preservation through progress: A letter from NOLA Media Group President Tim Williamson,” NOLA.com.

Cracking the Code NOLA.com I The Times-Picayune Tim Williamson