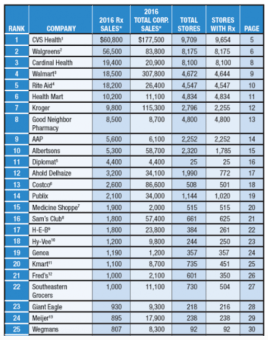 “The business and mission of pharmacies are being re-shaped by several major market forces, most impactful being uncertain health reform prospects at the Federal level — especially for Medicaid, which is a major payor for prescription drugs,” Jane Sarasohn-Kahn writes over at Health Populi. “Medicaid covered 14% of retail prescriptions dispensed in 2016, according to QuintilesIMS; Medicare accounted for 27% of retail prescriptions. ‘But if affordability, accessibility, quality, innovation, responsiveness and choices are among the standards that will be applied to any future changes, pharmacy has strong legs to stand on,’ Steve Anderson, president and CEO of the National Association of Chain Drug Stores, said in the PoweRx Top 50 report from Drug Store News (DSN). The pharmacy has always been a healthcare destination by the nature of what happens in the proverbial ‘back-of-the-store:’ dispensing prescription drugs, typically written by physicians. 50% of people in America take at least one prescription drug. 1 in two people in America have taken at least one prescription drug in the past 30 days, and 4.4 billion prescriptions were written in the U.S. in 2016. The table organizes DSN’s roster of the leading pharmacy retailers by 2016 Rx sales. The opportunities in the so-called ‘front of the store’ (including the aisles in the fast-growing number of pharmacies situated in grocery stores) hold promise for boosting health consumers’ overall health and wellness.” Jane Sarasohn-Kahn, “Pharmacies Morph Into Primary-Care Health Destinations,” HealthPopuli.com. Data source: Drug Store News, organizing DSN’s roster of the leading pharmacy retailers by 2016 Rx sales. 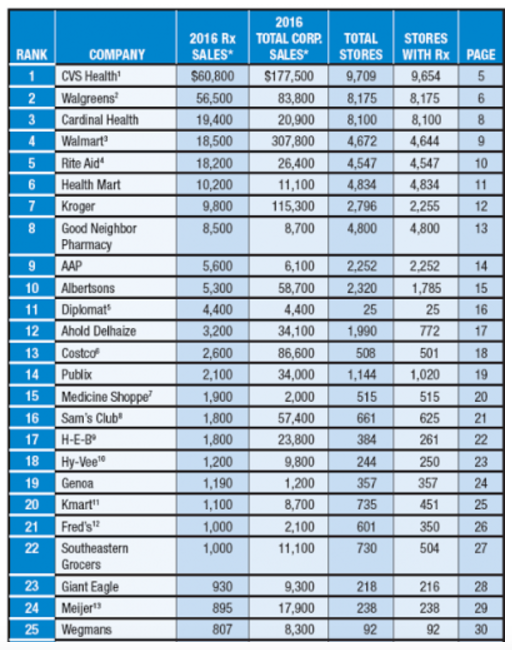