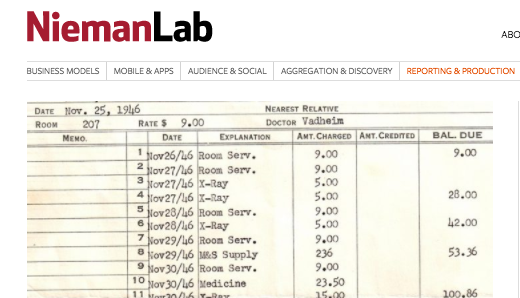 “’The voicemails would make you want to cry,'” Laura Hazard Owen writes about us over at NiemanLab, the future-of-journalism site at Harvard University. “When New Orleans’ WVUE Fox 8 News invited viewers to get in touch and share their healthcare costs, they weren’t sure what kind of response they’d receive. Would people be willing to dig up the explanation-of-benefits forms they’d received from their insurance companies? Would they be okay sharing what they paid for colonoscopies, MRIs, routine blood tests? As it turned out, not only were people willing — they leapt at the chance to participate in this crowdsourced investigation into healthcare pricing in New Orleans. The partnership between WVUE Fox 8, NOLA.com I  The Times-Picayune, and ClearHealthCosts drew thousands of responses through emails, form fills, letters, and voicemails — resulting in a package of stories that shed light on shady billing practices and help patients save money. ClearHealthCosts, based in New York, aims to bring more transparency to the healthcare marketplace by publishing the prices that people pay for medical procedures. The range is huge: The same kind of blood test cost $19 at one New Orleans lab, and $522 at a clinic a half block away. The same price discrepancies exist around the country. The company launched in 2010 with grants from the CUNY Graduate School of Journalism’s Entrepreneurial Program, the International Women’s Media Foundation, and the McCormick Foundation’s New Media Women Entrepreneurs Program. A series of early partnerships with WNYC, KQED in San Francisco, and others helped prepare it for the big New Orleans partnership this year. ‘Healthcare pricing is opaque and there’s information asymmetry all over the place,’ said Jeanne Pinder, the founder and CEO of ClearHealthCosts. The providers and insurance companies know the prices, but the patients know nothing. When you see an opaque marketplace like that, you can tell that people are making money off it. We think of this as a perfect use case for journalism — finding real, good information and displaying it back to the public.” Laura Hazard Owen,“’The Internet hates secrets’: ClearHealthCosts works with newsrooms to bring healthcare costs out of hiding,” Nieman Journalism Lab.