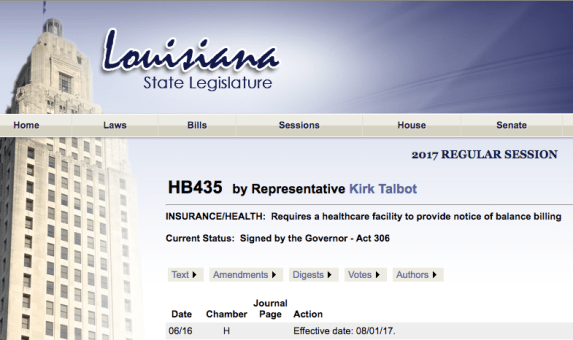 A bill requiring that people be notified in advance of potential balance billing at a health care facility in Louisiana passed the Legislature in Baton Rouge and was signed into law by the governor.

While we aren’t able to say that our work in New Orleans was the cause of the bill’s passage, we did hear before our work began in earnest from the state insurance commissioner, Jim Donelon, that he had sought to pass such a bill for 10 years and gave up. He talks about it in this news story from our partner Lee Zurik at WVUE FOX 8 Live in New Orleans.

Zurik’s piece on balance billing is part of our “Cracking the Code” partnership with WVUE and with NOLA.com I The Times-Picayune. Full details on the partnership are here.

Reporting on the bill in this TV news piece, Zurik wrote:

“Representative Kirk Talbot of River Ridge has a bill that won’t prevent balance billing, but does mandate that facilities notify patients that balance billing may occur, and give patients a list of doctors at the facility.

“‘We all know it’s a problem,’ Talbot says. ‘The thing is getting healthcare providers, insurance companies, hospital administrators all in the same room. When you talk to them separately, it’s always the other guy’s fault, it’s this guy’s fault, it’s that guy’s fault. You know, whatever, whoever’s at fault, if you can use that term, the patient is the one that always gets the short end of the stick. And that’s what I’m trying to do.

“‘This is almost like a bill of rights for patients,’ he continues. ‘They need to just let them know what the possibilities are before they go in.'”

Of course, the question of balance billing is a complicated one. Several states have banned it outright. Others have done a version of what Louisiana did —  telling people before it happens that they will be balance billed. Still others remain where Louisiana was: Balance billing allowed, with no notification.

It’s also true that balance billing is far from the only problem with health care costs. For example, we saved this woman $3,786 in Louisiana — and the balance billing bill Talbot sponsored would in no way have helped her as much as we did. The bill also doesn’t touch the question of third-party non-participating providers sending large bills, or any of a host of other problems.

But it’s heartening that this bill passed — directly as our work was so public and so visible in New Orleans.

Here’s the legislative history, with link to text of the bill, on the Louisiana Legislature’s site.