CORRECTION: Drive from Pennsylvania to New Jersey; save thousands on health care

[Editor’s note: We originally titled this “Drive from Pennsylvania to New Jersey; save thousands on health care.” After we posted, we were told that the law noted here applies only to New Jersey residents, so the headline and other parts of the post were wrong. We’ve edited the post to reflect the language in the bill.]

In New Jersey, many uninsured self-pay patients  qualify for a price of 115 percent of the Medicare fee schedule on both inpatient and outpatient procedures, under a 2009 law (see below).  Pennsylvania has no such law.

We learned in our pricing survey in Philadelphia that the differences can be significant.

How we do our survey: We ask providers to tell us their cash or self-pay price for a range of 30-35 common, “shoppable” procedures. Then we display them in a searchable database and create journalism with the results. Here’s an explanation of what we do.

When we do this, we find some major price disparities. For example, here’s a spreadsheet that came to us from the Thomas Jefferson University hospital system. Jefferson is Pennsylvania-based, and it recently acquired three New Jersey hospitals, in Cherry Hill, Washington Township and Stratford.

When we surveyed Jefferson for its cash or self-pay prices for our common 20 or so procedures, the public relations department gave us this spreadsheet, which collects facility fees only — not the actual doctor’s fees. For the three New Jersey hospitals, the spreadsheet notes that these hospitals all observe the New Jersey law for all uninsured self-pay patients (if they don’t qualify for other forms of financial aid).

As noted, we don’t know the other fees for these procedures — a radiologist’s reading fee, a doctor’s fee for a colonoscopy, an anesthesiologist and so on. Some hospitals, like Jefferson, tell us they cannot report anything but the facility fee. So this isn’t an all-in price for such a procedure.

How does the law work?

About the state law that governs self-pay hospital pricing in New Jersey: “A 2009 state law caps hospital charges for most uninsured patients at 115 percent of Medicare rates (and since Medicare reimburses hospitals an average of 91 percent of costs, that’s just slightly more than break-even.) These protections apply to individuals earning up to 500 percent of the federal poverty level – or up to $117,750 annually for a family of four,” the New Jersey Hospital Association blogged here.

(Added) The law applies only to New Jersey residents.

Here’s how it happens. “The patient accounts/financial services staff meets with the consumer, and if that individual is uninsured, the staff would go through a few different processes, based on the individuals’ income eligibility information,” Kerry McKean Kelly, vice president of communications for the New Jersey Hospital Association, wrote in an email. “First the hospital staff would see if the consumer qualifies for Medicaid and if so, would help facilitate getting the individual signed up for coverage; next, if the person doesn’t qualify for Medicaid, the hospital would check to see if he or she qualifies for free or discounted care under the state’s charity care program.

“If the individual doesn’t qualify for that program, the next step would be to determine if the individual is within 500 percent of the federal poverty level (which is income of about $125,000 annually for a family of four in 2017) and then would automatically apply the cap of 115 percent of Medicare rates. Medicare rates, by the way, cover about 90 percent of hospitals’ actual costs in New Jersey, so 115 percent of Medicare is roughly at cost. [The blog post above refers to the Federal Poverty Level at the time of writing; Kelly was referring to the current Federal Poverty Level.]

“I should add that while all hospitals have this state requirement as a minimum, some hospitals have their own policies for uninsured patients that may offer even greater discounts – like Medicare rates, for example. But that would be a policy by the individual hospital and I don’t have comprehensive information on that.”

How widely is it used?

I asked if there are statistics on usage.  “I don’t have dollar amounts, but I do know that it’s a very, very small group of the total patient population,” she said. “By the time you subtract out self-pay patients who qualify for Medicaid and the state’s charity care program – as well as people now insured through the Health Insurance Marketplace – the remaining population is less than 5 percent of the total universe of patients. We do know that some hospitals just apply the cap universally on all remaining self-pay patients (after qualifying people appropriately for Medicaid and charity care) because in the end it’s such a small number of people left facing full hospital charges.”

This is Jefferson’s practice, according to John Brand, vice president of media relations at Thomas Jefferson University and Jefferson Health.

How are people notified of this? Kelly said it’s “baked in” to billing, so many people may not realize.

She added that notification takes place in several ways, which were defined in part by state regulations when the law was enacted:  Via hospital websites,  in signs posted in their facilities (optional) and in notifications by the patient accounts/financial services staff.

Since billing in general and hospital billing in particular is so complicated, I asked if people are generally aware of this discount. “For consumers, healthcare billing admittedly can be confusing and there are probably some who may not even realize they’re receiving this standard statewide discount,” she said. “It’s automatic and it’s baked in to the hospitals’ processes – there’s no application or anything specific the consumer needs to do to receive the discount. ”

Do other states do this? She said: “To the best of our knowledge, there are nine states beyond NJ that have some type of law limiting the amount hospitals can charge uninsured patients”  – California, Colorado, Illinois, Maryland, New York, Oklahoma, Rhode Island, Tennessee and Washington.

Here’s a description of the Colorado law, which passed in 2014 and applies to uninsured patients under 250 percent of the federal poverty level.

The Illinois act, which passed in 2009, says “hospital charges to eligible uninsured cannot exceed the costs of the services plus 35 percent. This law also puts an annual cap on the amount of money hospitals can collect for services from eligible uninsured patients to no more than 25 percent of a patient’s family income.” The patient must apply for the discount; to apply a person must earn less than six times the Illinois  poverty line (for a patient in a family of four, that’s  less than $132,300). The discount will be calculated on a sliding scale. It applies to medically necessary hospital services that exceed $300, but not to   physician services, according to the Illinois Department of Public Health website. 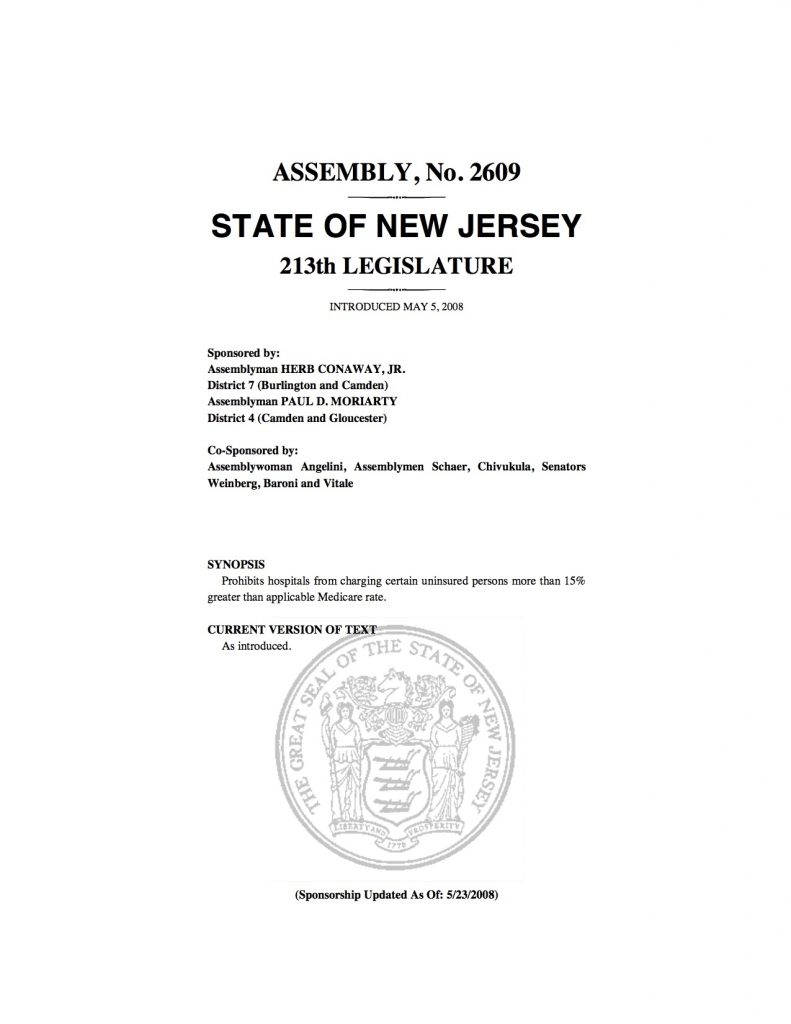