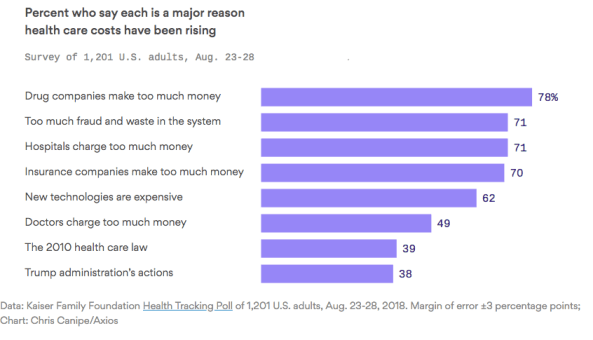 “The latest Kaiser Health Tracking Poll finds recent political events weighing heavy on the minds of voters when it comes to the 2018 midterm elections,” Bryan Wu, Cailey Muñana, and Mollyann Brodie write over at KFF.org. (The chart here shows who the respondents feel is to blame for high health costs.) “Three in ten voters (33 percent of independent voters, 32 percent of Democratic voters, and 25 percent of Republican voters) say corruption in Washington is the “most important” topic for 2018 candidates to discuss. This is the first time corruption in D.C. was included in KFF’s list of possible campaign topics and, along with health care (27 percent) and the economy and jobs (25 percent), it is among the top topics for voters three months before the 2018 midterm election.  KFF polling continues to find pre-existing conditions as a widespread concern and with the impending lawsuit Texas v. United States, a majority of the public say it is ‘very important’ that the Affordable Care Act’s (ACA) protections for people with pre-existing conditions ensuring guaranteed coverage (75 percent) and community rating (72 percent) remain law. About half (52 percent) of the public are ‘very worried’ that they or someone in their family will have to pay more for health insurance and four in ten (41 percent) are ‘very worried’ they will lose their coverage if the Supreme Court overturns these protections. … This month’s tracking poll finds an increase in the share of the public who say drug companies making too much profit is a ‘major reason’ why people’s health care costs have been rising (78 percent compared to 62 percent in 2014). However, less than half of the public – four in ten (42 percent) – say they think President Trump’s strategy of publicly shaming drug companies and asking them to cut prices will be effective in reducing prescription drug costs overall and a similar share (38 percent) are confident that the president will be able to deliver on his promise that Americans will pay less for prescription drugs under his administration. Health care costs continue to be an important issue in the 2018 midterm election and beyond. When given a list of possible worries, unexpected medical bills tops the list that includes other health care costs such as premiums, deductibles and even drug costs, as well as other household expenses. Four in ten insured adults ages 18-64 say there has been a time in the past 12 months when they received an unexpected medical bill and one in ten say they received a “surprise” medical bill from an out-of-network provider in the past year.” Bryan Wu, Cailey Muñana, and Mollyann Brodie,
“Kaiser Health Tracking Poll – Late Summer 2018: The Election, Pre-Existing Conditions, and Surprises on Medical Bills,” The Henry J. Kaiser Family Foundation.