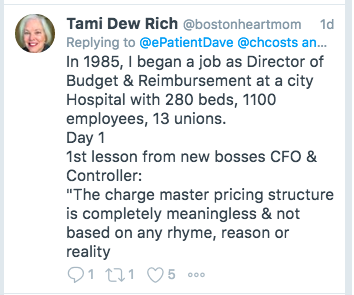 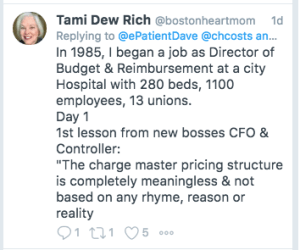 The newly released hospital price lists have been kicking up a lot of commentary on Twitter, Facebook and LinkedIn. The lists, as we’ve been discussing, are being made public in compliance with a new Centers for Medicare and Medicaid Services rule that hospitals have to post all their list prices online as of Jan. 1. The  lists basically are a reproduction of the hospitals’ lists of charged prices, called a Chargemaster.

Here’s a chain of comments from Tami Dew Rich, a former hospital administrator. She said when she started work as “Director of Budget and Reimbursement” in 1985, she was told “The charge master pricing structure is completely meaningless & not based on any rhyme, reason or reality.”

The charges, at this Massachusetts hospital, she explained, came form the concept of a base year (1980( with Maximum Allowable Costs and inflation going forward. “We knew in ’79 it was coming so we front-loaded the base w/MASSIVE SPENDING.” 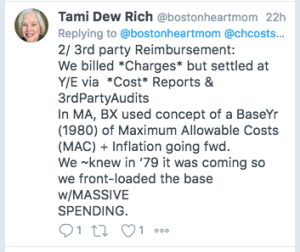 She added that they kept one set of books for the board, the accountants, and third-party auditors, set to have a bottom line that breaks even. The second, “FYEO,” For Your Eyes Only, made money.

This does not completely surprise anyone, you must understand. People in the hospital industry know this is true to some degree at many hospitals — the surprising thing is that someone’s talking about it out loud.

A friend of mine who used to be a hospital administrator told me once that they added to the Chargemaster as they saw fit.

Another friend, joking about the Chargemaster, said, “Bob in accounting made that in the Seventies, and we just add a few percentage points every year.” 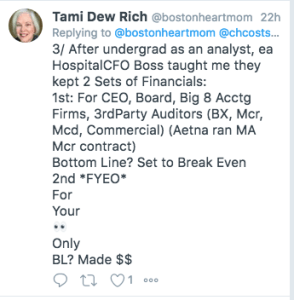 The charged prices, of course, serve several functions in the marketplace:

Hospitals and insurers stubbornly cling to them because that’s how they have done business for years, and they don’t wish to see change. 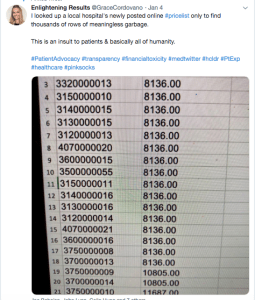 Niall Brennan, formerly of the Center for Medicare and Medicaid Services and now at the insurance industry’s Health Care Cost Institute, was similarly scornful in this thread on Twitter.

“I’m pretty unimpressed with this latest initiative and think we continue to keep asking ourselves why we continue to roll our terribly flawed ‘transparency’ initiatives that do little or nothing to help patients navigate the system in a more informed manner,” he tweeted. “Data is non-standardized and practically unfindable on many hospital sites – I’ve no doubt tech firms could take a run at this but why? Comparison tools of hospital charges were built 5 years ago and no-one used them because the data isn’t meaningful for patients.”

Meanwhile  Grace Cordovano, a patient advocate, posted on LinkedIn the set of numbers with prices attached at right, calling it “an insult to patients & basically all of humanity.”

For her part, the head of CMS, Seema Verma, tweeted that “#PriceTransparency in #Healthcare is a major priority for #POTUS and his administration, and in 2 short years we’ve already accomplished a lot.” She cited legislation to end gag clauses in contracts, which has had zero effect, and a proposal to require drug companies to disclose list prices of drugs in ads.

It’s hard to believe that this can be represented as progress on transparency, but there you have it. 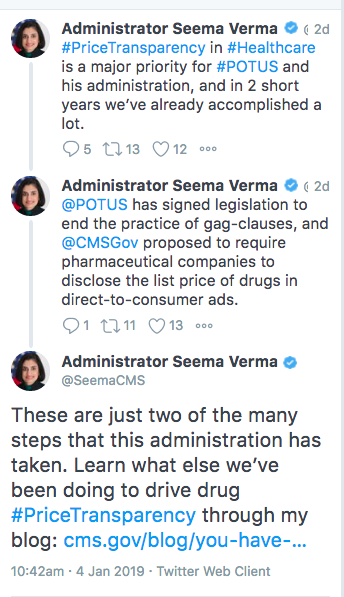