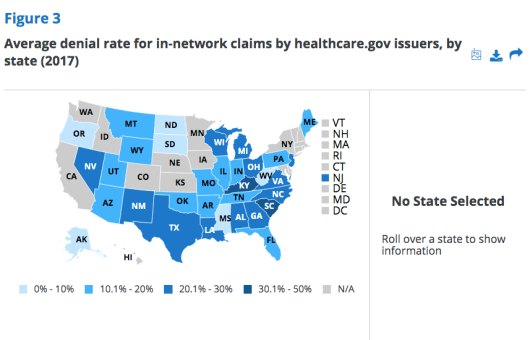 “In this report, we analyze transparency data released by the Centers for Medicare and Medicaid Services (CMS) to examine claims denials and appeals among issuers offering individual market coverage on healthcare.gov from 2015-2017,” Karen Pollitz, Cynthia Cox and Rachel Fehr write for the Kaiser Family Foundation, in a startling analysis of federal data that reveals the large number of health insurance claims that are overturned. “We find that, across issuers with complete data, 19% of in-network claims were denied by issuers in 2017, with denial rates for specific issuers varying significantly around this average, from less than 1% to more than 40%. We also find that consumers rarely appeal claims denials to their issuers, and when they do, issuers typically uphold their original decision. Healthcare.gov consumers appealed less than one-half of one percent of denied claims, and issuers overturned 14% of appealed denials. Transparency data can provide information about health plan coverage and operations that might not otherwise be readily apparent. For example, they can reveal how often issuers deny claims or pay claims promptly. Transparency data can also shed light on the adequacy of health plan networks, for example, showing how often enrollees seek out-of-network care. Data can form the basis for report cards or other tools to help consumers understand and compare health plan options, and can inform oversight activities, such as plan certification and market conduct examinations. ACA Marketplace plans denied an average of nearly 1 in 5 in-network claims in 2017; denial rates ranged from 1% to 45% across insurers The data posted by CMS has significant limitations, some of which may be partially addressed in future collections. The large range in claim denial rates across issuers raise questions about the quality of the data. The current release does not provide information about why a claim was denied, making it difficult to assess what is driving the denials and why they vary so much. CMS also is not collecting data for several categories specified in the Affordable Care Act (ACA), including the number of out-of-network claims submitted and denied and consumer financial liability for out-of-network claims. In addition, while the law requires reporting by most employer-sponsored group health plans and other individual market plans, CMS is currently only collecting information from issuers offering individual plans through the Federal Marketplace.” Karen Pollitz, Cynthia Cox and Rachel Fehr, “Claims Denials and Appeals in ACA Marketplace Plans – Issue Brief – 9283,” The Henry J. Kaiser Family Foundation.