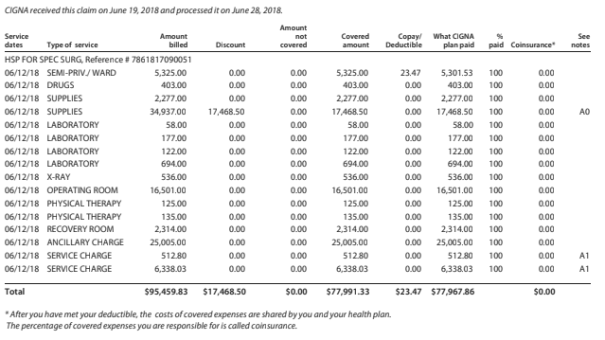 A friend had a hip replacement recently, and she sent over her bill. What’s interesting to us is, among other things, the Hospital for Special Surgery bill and the Cigna bill don’t add up.

It’s not clear that any of this is apples to apples.

It seems everything else it paid in full, with no discount. We find this very unusual: insurers almost always discount off the charged price.

‘I had to request an itemized bill as I was floored’

“I had to request the itemized bill as I was floored at the original Cigna EOB so called and asked for an itemized bill. It was for hip replacement at HHS. A friend who is a recently retired orthopedic surgeon mentioned that the wholesale cost for the prosthesis is more like $3,500. (Editor’s note: The C1776 items below are the prosthesis. The total billed amount for those entries is $34,444.)

“At the time of surgery I was covered by Cigna and this was in network. …

“I was in the hospital from 8AM until 6PM, and released from the recovery room. This was unusual for HSS, but I knew what it would take, having the spinal wear off and being cleared by a physical therapist that I was able to walk with crutches. I was motivated to get home so asked for the PT as soon as the recovery room nurse cleared me. The PT cleared me and I was on my way home.

“Cigna paid more than the bill. I attached their first EOB. Twice I called Cigna and asked about this. They ‘investigated’ and said it was required per their contract. I had a 5K deductible in network policy. ”

What did my friend pay?

“All I paid in total was my 5K deductible. I appealed the charge for crutches as that was out of network. They were provided at an in network facility, by in network physical therapist, and required to leave the hospital. I would have had a second out of network 5K deductible for them. The 5K I paid was to other providers by the time I got this hospital bill.”

She explained further about the expensive crutches:

“It seems predictable that when so many steps are between the service provider and the patient, who generally doesn’t pay the bill, that there are almost always errors and rarely in favor of the patient….

“The only itemized bill I requested was the hospitalization bill. There were about 5 bills from the actual hospitalization, not counting bills for pre-surgical clearance or follow up. There was:
• the hospital (the one I sent)
• the surgeon
• the anesthesiologist
• the radiologist
• the pathologist
• The physical therapist
• The surgical supply company, (based in NJ) for the crutches,

“My expectation was to pay the first 5K, and then be done. Before the hospitalization I paid bills towards the deductible including the HSS MD who examined me and cleared me for surgery, the lab work done to clear me for surgery, the initial radiology, and office visit to the surgeon to decide if he would do my hip replacement, etc. I was careful to ask if the providers where in network. I paid some of the bills from the day of surgery, but just up to my deductible, then Cigna paid everything else. Cigna paid the full hospital bill.

Appealing the charge for the crutches

“The first I knew the crutches were out of network were when I got a bill from BioDynamics, weeks after the surgery for $89.98 from BioDynamics in East Rutherford, NJ. They would not accept return of a new identical pair, which cost about $35.50. I filed an appeal with Cigna and said they were needed to leave the hospital, and I left from recovery, saving them the cost of staying overnight. They agreed and paid the bill for crutches, probably because it was reasonable and would cost them more to fight with me.

“Hopefully this has cleared up some of the confusion around my billing. The only bill that seemed totally out of line was the hospital bill. The surgeon’s bill was more typical. The EOB showed he billed for $26,970.53 and was paid $6,017.75. Cigna took 3 months to pay him. I called Cigna to ask about the delay and they said they were waiting for something from ‘Orthonet’ their processor. Orthonet requested office notes from the surgeon and they were supplied within 2 weeks of the surgery. Cigna reps said they weren’t clear if Orthonet was supposed to pay the claim or Cigna. I followed up daily until Cigna finally paid, pointing out that if I paid their premiums the way they paid this claim, they would have cancelled my policy!

“While I don’t use much health care, I am able to follow up and complain when things look wrong, as I did with the hospital bill. I didn’t have to pay any of it, but the high payment will increase rates the next year, and their insured, as I was for 2 months this year, have to pay those higher rates. I’m so happy to be on Medicare starting this month!!!”

Another payment exceeding the bill

(Update, Sept. 2019) This practice of the insurer paying more than the bill seems to come up not infrequently. This person shared on our CBS project page a similar case. 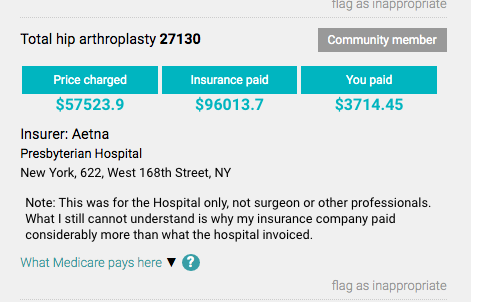 Back to the original hip operation, here are her documents. The first document is the Cigna explanation of benefits. Below that is the three-page itemized bill from HSS. 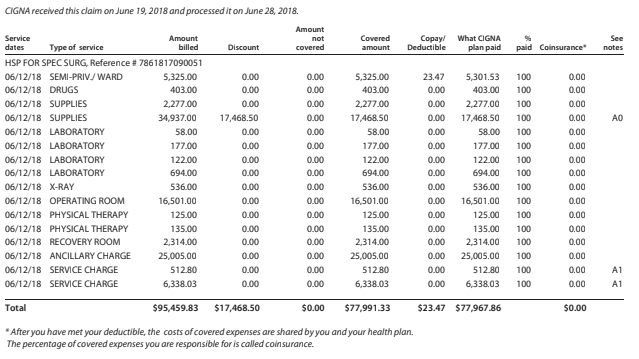 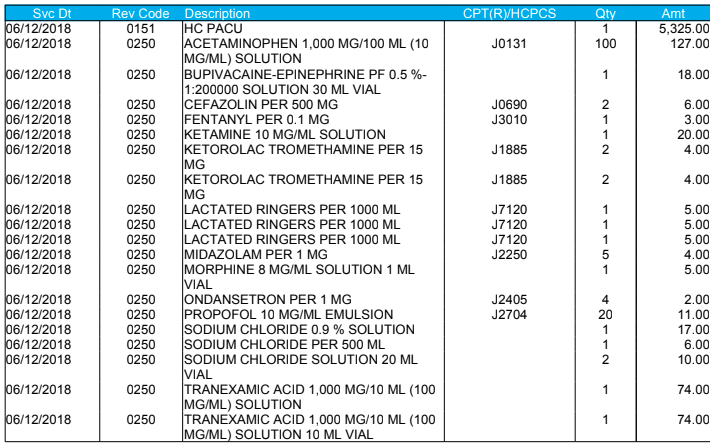 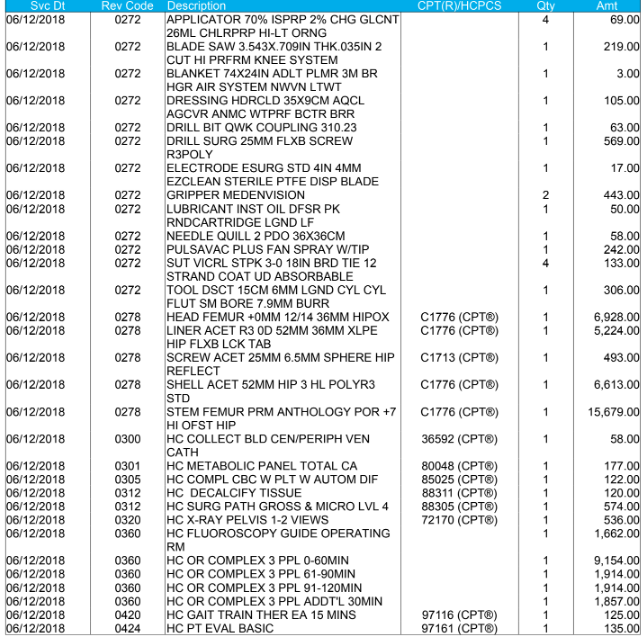