A $9,000 surgery, and her dog died: A different take on health costs, this time for pets 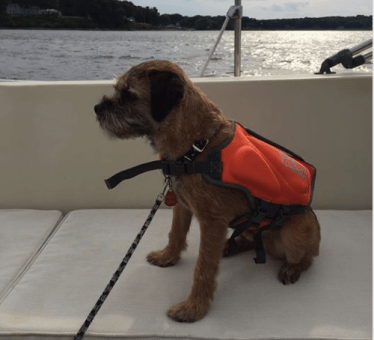 My friend Lisa Collier Cool had a young dog who died a few months ago after surgery at the Animal Medical Center in Manhattan. She was charged $9,000, and was irate. Cool, an author and journalist, wrote this letter. Her web site is here.

Why am I’m posting here? We hear a lot about people arguing over medical bills, and we are asked frequently if we plan to collect and display prices for veterinary medical procedures. (The answer is no, at least not right now.) Yet this particular story touched me. Also, Lisa’s a fine, meticulous journalist, and I think her story is worth telling. She put this on Facebook, and I asked if I could post it over here, and she granted permission.

Nearly 5 months to the day after disastrous post-surgical “care” at the The Animal Medical Center in the NYC killed my beloved 5-year-old Border terrier, Angus, for reasons that no one there has ever been able to satisfactorily explain–but independent experts attribute to gross mismanagement of his IV fluids leading to extreme weight loss and dehydration–I’ve resolved my ongoing dispute over their bill of $9,080 for this fatal treatment, sent with a cheery message reading, “Thank you for visiting the AMC!”

We settled upon a discount since I don’t have it in me to continue this emotionally wrenching fight. Below is the letter I sent that details the situation, which I hope will be helpful to anyone who has similar issues with the AMC or any veterinary hospital and may also serve as a cautionary tale to those considering having their pets treated at the AMC so they can avoid a similar tragedy. We now have a new Border terrier, Ollie, who is a relative of Angus and in excellent health, to console us.

As an award-winning medical journalist who has written for the New York Daily News, The Wall Street Journal, Yahoo! and many other leading national media outlets, I always strive to get top-quality healthcare for my family, including our pets. When our previously healthy five-year-old Border terrier, Angus, developed a few minor symptoms due to a liver shunt, my husband and I turned to the AMC, trusting that that Angus would be in excellent hands for the ameroid ring procedure that Dr. Pamela Schwartz recommended.

That turned out not to be the case—48 hours after the December 31, 2018 surgery, we were devastated and heartbroken to be told that Angus was brain dead and had repeatedly gone into respiratory and cardiac arrest for reasons that no one at the AMC has ever satisfactorily explained. I had two independent veterinarians, one of whom works for the FDA and the other who reviews cases as an expert for the state veterinary board, review Angus’ medical records. Both have concluded that the cause of death was extreme dehydration due to mismanagement of his IV fluids. Given this catastrophic mistake, we seek a refund of the $5,409.73 paid to the AMC and request that the additional bill we received for $3,671.33 (with a cheery note reading, “Thank you for visiting the AMC”) be waived. These experts have identified multiple issues with his care, which are described below.

Extreme dehydration, 9% weight loss in 24 hours and malfunctioning IV equipment. On 12/31/18, when we brought Angus to the AMC for the surgery, he was bright, lively and alert, weighing 6.3 kg, according to the AMC’s records. The next day, his weight had dropped to 5.75 kg., a 9% decrease. That would equate to a 150-pound person losing 13.5 pounds in 24 hours!

Raging thirst and a malfunctioning IV

When we visited him in the morning of 1/1/19, after being told that the surgery had “gone well” and that Angus was “stable overnight,” he was dazed, did not recognize us and had such a raging thirst that during our 10-minute visit, he quickly drank two big bowls of water and looked around for more. We also observed that his IV was malfunctioning and its alarm went off three times during our visit. Each time, the vet tech turned off the alarm, only to have it go off again. We reported Angus’ extreme thirst to the vet tech during the visit and asked him to let the doctors know. I was so concerned about Angus’ hydration that I called the ICU later that day, saying I was worried that he wasn’t getting enough water.

AMC’s records repeatedly discuss dehydration and show that not only did he not regain the weight lost in the first 24 hours, but his weight dropped in the next 12 hours to 5.64 kg (a total loss of 10.5% of his body weight in 36 hours). One veterinarian we consulted states that the records indicate someone calculated how much fluid would be needed to replace what had been lost, but ordered it to be given over 24 hours, instead of “running the line wide open,” as she states would have been the standard of care for such severe dehydration. She also states that all of the symptoms that the AMC has been unable to explain—profound electrolyte abnormalities, high fever, brain injury, and mouth twitching—are known effects of dehydration that should have been diagnosed and immediately treated by the ICU team. Subsequently, our dog was heavily sedated and unable to drink on his own, yet still didn’t get enough IV fluids to restore his weight. It was repeatedly noted in the records that he was urinating frequently and profusely, making it even more obvious that he was losing fluid rapidly.

Medical record errors and unauthorized spleen removal and charges. After the surgery, we were told that Angus’ spleen had been removed, at a cost of $1,114.33, even though we were not contacted about this unexpected surgery beforehand nor did we ever authorize this expense. The medical records variously describe a benign nodule on the spleen as either being 0.8 mm or 2×2 cm (a 250% discrepancy in size). Our consultant finds it odd that this issue was not detected on the CAT scan for which we paid $1,600. She also points out that nobody apparently noticed that Angus had large kidney stones and questions how carefully the scan was reviewed and interpreted pre-surgically.

Other medical record errors: We received a bill saying that the surgery had been performed by Emily Kennedy, who does not hold any type of veterinary license in NY, which is contradicted by another record saying the surgeons were Drs. Sunlight and Schwartz. One medical record says he “ate well in the afternoon.” Elsewhere it says he ate nothing on that or any other day.

Was he stable, or did he have a seizure?

Chaotic, uncompassionate care. On the day Angus died, 1/2/19, we got a call in the morning from the ICU saying that Angus had had a grand mal seizure during the night. Five minutes later, we got a call from Dr. Sunlight stating that Angus had been stable overnight with no problems. I asked her if the other person was wrong to say there had been a seizure. She called back a little later to confirm that a seizure had occurred. Apparently she hadn’t checked the medical record before the first call. Later that day, she stated that he had “profound electrolyte abnormalities” and needed a slightly longer ICU stay, but she “felt sure” he would “go home on Friday.” Less than two hours later, she called back to say we should rush to the AMC to say our last goodbyes because Angus was dying.

To this day, we never received any explanation of Angus’ death, condolences or apology from Dr. Schwartz, who had told us in a presurgical consultation that he was “an excellent candidate” for this surgery, that she had done it “numerous times” with a rate of “about 5%” of serious complications, while the other 95% of cases were entirely successful. She also stated that in a recent study, dogs that were pre-treated with an anti-seizure drug had a 0% rate of the most serious complication (seizures). She prescribed that drug and we administered it as advised.

When I rushed to the AMC in tears after being told our dog was dying, Dr. Schwartz never came out to talk to us, nor has she EVER been in touch. Dr. Slade said our beloved dog was “brain dead” and he didn’t know why, but advised a necropsy to find out. We were also advised to get euthanasia (described on the bill as $69.13 for “patient services”), but when we saw Angus before the injection, he appeared to be already dead—he wasn’t breathing, had no apparent heartbeat, glazed eyes and his body felt cold.

We got a card with the ghastly “rainbow bridge” poem, which greatly upset me. I had to contact the AMC numerous times for months before getting the necropsy results, which discusses the seizure but makes no mention of fluid management issues that caused our dog’s drastic weight loss and in the view of the independent experts, killed him. Nor does it list any specific cause of death or explain why he developed aspiration pneumonia, brain swelling and a host of other hospital-acquired conditions when he was in near-perfect health pre-surgically. In the end, we are left as we began with the AMC, with no satisfactory explanation of why he died less than 48 hours after a supposedly low-risk surgery. The authorization form doesn’t list death as a risk.

Suspected procedural injury. Our expert also noticed that when Angus was catheterized for urinalysis several days before the surgery, he may have been injured because fresh red blood was found in the urine.

Given this multitude of problems and the fatal “care” the AMC provided, I hope you will do the right thing, refund the 5,409.73 we already paid and waive the $3,671.33 bill. Not only did we lose our young, pedigreed dog and suffer tremendous emotional distress, but we also spent $300 on cremation and will be spending $1,800 in April to buy a Border terrier puppy of the same championship bloodline as Angus. I also hope this letter will prompt your surgical and ICU staff to improve its IV fluid protocols and check for malfunctioning IV equipment so that no one else suffers a similar tragedy in the future. We’d like to resolve this quietly and try to move on.

What the Animal Medical Center said

I asked her what the AMC replied, and she added: “I reviewed the letter they sent and below is a quote that sums up their position.

“We have conducted a thorough medical review of Angus’s case and the care and treatment he received while at the Animal Medical Center. The medical review concluded that Angus died from complications of portosystemic shunt attenuation surgery, specifically seizures…one of the known risk factors that was discussed with you.” The letter also states that, “all pre and post-operative care was deemed medical appropriate” in their review of their own work.

“The letter from the Animal Medical Center is dated April 4, 2019 and signed by ‘Dr. Queensberry, Chief Medical Officer’ and ‘Liana Everaert, Executive Director of Client Relations.'”