How much does an emergency room visit cost? Or how to successfully argue a bill

His kid was treated at the emergency room at Children’s Medical Center – Plano, Tex., he told us when he shared his experience on our website.

I asked him some questions and he answered that the diagnosis was constipation, treatment was a milk & molasses enema ($48). There was also a charge for a $447 X-ray (CPT 74018).

“We’ve so far paid the $500 copay (went up a LOT this year), and there remains the $1001.24 balance bill (deductible not yet met). I am asking them to review the charges, as they are excessive.”

He wrote to the hospital challenging the bill

His letter to the hospital said, in part:

While ACEP ER guidelines do mention abdominal pain in their “high severity” level 4 description, I find it hard to reconcile that catch-all classification with the fact that we came in for a stomach ache and had to wait four hours to see a PA, on a relatively slow night in the waiting room. If you indeed considered this a “high severity” visit, why did we have to wait so long?

I also understand the putative high cost of ER medicine requires you to bundle and distribute many expenses into single E&M charges. Nonetheless, the four-hour wait makes me think you were perhaps understaffed, and had fewer docs on the floor that night (which should cost you less), and yet you still feel entitled to a an above-average $1770 for a 99284. Fairprice lists $1498 as their “fair price” for that proc, and ClearHealthcosts reports 99284 incurring a $1014 charge at nearby Baylor Scott & White. And Medicare only pays $120 for 99284. I’m also puzzled the X-ray cost $447. Fair Price lists $58 as a reasonable price for an abdominal X-ray.

As things stand with my insurer, we are being asked to pay over $1500 our of pocket for these services. Considering the facts above, I would like you to discount these charges, or at least recode the 99284 to a level-two 99282, or at most a level 3 99283, as this was most certainly not a “high severity” visit, nor did you treat it as such.

I finally saw some motion on the ER bill we discussed last year.

I just found the letter and I have forwarded the account to charge review to have the ER level checked since there is a difference on the Hospital side compared to the APN side.

A collection agency steps in

And that’s the last I heard until last month, when I got a collection agency letter for the full balance of $1001.24.

Because the charge was still being investigated, I recently sent a certified letter disputing the charge to the collection agency, which as of today was never delivered/accepted (and that’s another curious detail here).

I called Children’s yesterday to discuss the issue and they said they had done a “Charge Review” (last year I presume) and decided the charge was correct, but apologized for never letting me know (!).

I asked to appeal it further due to the still-unresolved discrepancy in severity levels, and they said a manager will call me in the next few days.

I’m still considering what to do if they refuse to budge. I don’t really know how my credit might be affected if I refuse to pay this.

At last! A happy ending

Finally, a month later, in June 2019, he told us the resolution.

Here’s a final, happy update to the story.

I never did hear from the billing manager, so I wrote a letter directly to the CEO of Children’s Medical center expressing concern with the poor communications, and asking for his help.

I quickly got a call from the billing manager, who was not familiar with my case. I brought her up to speed, she said she’d look into it, and today she called to say they decided to drop all remaining charges (due to their dropping the ball so badly).
She said there was a 4-month delay in the charge review, then it went to “another facility” for 5 months, and then got routed to collections in light of the age of the bill. She was somewhat contrite said she didn’t understand how it happened.

On my first call with her though, it didn’t sound like they were going to budge on the price: she says there’s no correspondence between the severity level on a PA bill and the CPT severity level on Facility bill (which I found surprising).
She also said they were a level-3 (or 4?) specialty hospital and as such they need to charge higher prices, and one shouldn’t compare them to local averages, nor Medicare reimbursements.

The crazy thing now is I feel relieved and happy to have *only* paid $564 for a silly ER visit for a constipated kid.

I enjoyed your TED talk – keep up the good work!

What takeaways can we give our readers?

I would say do your best to shepherd the appeal as far as it will go. You never know when the other side is going to “give in.”

Even if it goes to collections, one can still negotiate in good faith and make an offer to settle.

I also try to keep in mind the people I’m contending with are generally good people, but with a different viewpoint, so be polite and mention what they did right too – nobody wants to make much effort to help an angry complainer. 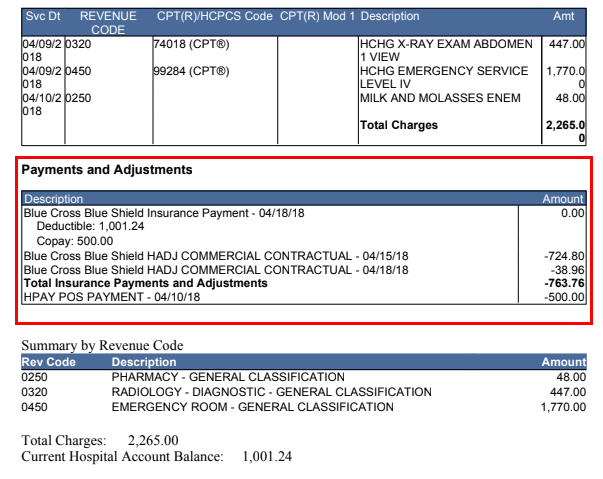