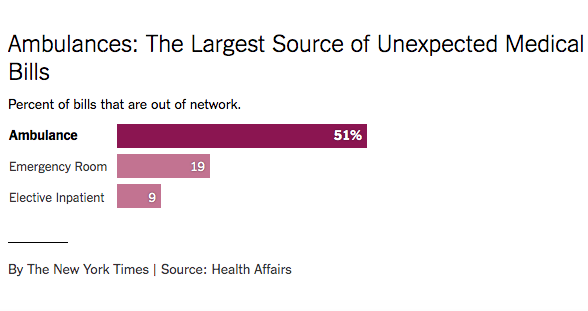 “After his son was hit by a car in San Francisco and taken away by ambulance, Karl Sporer was surprised to get a bill for $800,” Sarah Kliff and Margot Sanger-Katz write for The New York Times. “Mr. Sporer had health insurance, which paid for part of the ride. But the ambulance provider felt that amount wasn’t enough, and billed the Sporer family for the balance. ‘I paid it quickly,’ Mr. Sporer said. ‘They go to collections if you don’t.’ That was 15 years ago, but ambulance companies around the nation are still sending such surprise bills to customers, as Mr. Sporer knows well. These days, he oversees the emergency medical services in neighboring Alameda County. The contract his county negotiated allows a private ambulance company to send similar bills to insured patients. In most parts of medical care, you can choose a doctor or hospital that takes your insurance. But there are some types of care where politicians have begun tackling the ‘surprise’ bills that occur when, say, patients go to an emergency room covered by their insurance and are treated by a physician who is not.  Five states have passed laws this year to restrict surprise billing in hospitals and doctor’s offices. Congress is working on a similar package of measures, after President Trump held a news conference in May urging action on the issue. But none of these new policies will protect patients from surprise bills like the one Mr. Sporer received. Ordinary ambulances that travel on roads have been left out of every bill. ‘Ambulances seem to be the worst example of surprise billing, given how often it occurs,’ said Christopher Garmon, a health economist at the University of Missouri-Kansas City. “’f you call 911 for an ambulance, it’s basically a coin flip whether or not that ambulance will be in or out of network.'”Sarah Kliff and Margot Sanger-Katz, “Politicians Tackle Surprise Bills, but Not the Biggest Source of Them: Ambulances,” The New York Times.