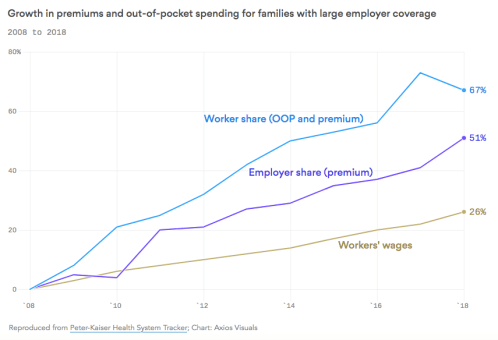 “The past decade has seen enormous growth in health care costs paid by both employees and employers, creating the context for some of today’s biggest political debates as well as teeing up more problems for the future,” Caitlin Owens writes for Axios. “Yes, but: There are some signs that employers have maxed out their ability to shift costs to employees. By the numbers: Health spending by families who get their insurance from large employers has grown two times faster than wages over the last decade, driven partially by the rise in deductibles, according to a new brief by the Kaiser Family Foundation. Employees’ average costs for family coverage rose from $1,779 in out-of-pocket spending and $2,838 in premiums in 2008 to $3,020 and $4,706, respectively, in 2018. But it’s not like employers’ costs have remained stable over the same time period: Their premium contribution has risen, on average, from $10,008 to $15,159. Why it matters: People are paying higher premiums for insurance that leaves them on the hook for more of their bills. Rising deductibles ‘has worsened inequality, fueling anger and resentment and adding to the country’s unsettled politics,’ the LA Times’ Noam Levey recently reported in a series on high deductibles. It’s also fueled the debate over prescription drugs, which have become more expensive as patients become more exposed to their cost. That’s been especially hard on chronically ill people, and ‘has made being sick in the U.S. dramatically more expensive,’ Levey reported.” Caitlin Owens, “Employer health insurance keeps getting more expensive,”  Axios.