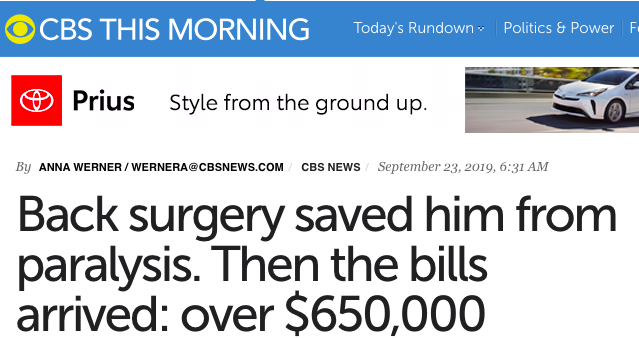 Here’s the first story from Anna Werner, national consumer investigative correspondent at CBS This Morning.  She interviewed Frank Esposito, who faced close to $700,000 in medical costs after receiving surgery after an emergency room visit for a herniated disk. He says doctors told him he could have been partially paralyzed if he did not have immediate surgery. He had insurance, but just weeks after the surgery, the bills came rolling in. His insurance company claimed the surgery was not medically necessary. He has hired a professional to fight back and has tapped into his retirement account to pay bills.

Our work will be featured on CBS This Morning (7-9 A.M. ET), CBS Evening News (6:30-7 P.M. ET) and the CBSN streaming network, as well as the CBS  News Radio Network and other CBS properties.

We’ll use shoe-leather reporting, crowdsourcing, data journalism and other tools to tell people what stuff costs. We started out with a survey of cash or self-pay prices in two sample cities — Dallas and San Francisco — and we’re asking people across the nation to share their prices with us to help in our reporting.

“Medical Price Roulette” will explore the problems and solutions surrounding the lack of transparency of medical costs charged by hospitals and providers and why they vary – often dramatically. We started by collecting the prices of 30-35 common, “shoppable” medical procedures in those two metro areas and discovered drastic variations we’ve seen in other cities across the nation. Here’s the teaser they ran on Sept. 20.

Here’s the project page, which will collect all of our work.

“Consumers often complain of suffering from health care bill sticker shock after undergoing a medical procedure,” said Kimberly Godwin, CBS News’ Executive Vice President of News. “This important series will take a deep dive on this topic and shed light on why the same test can cost different prices, why medical bills are hard to understand and what steps people can take to avoid being surprised by medical bills in the future.”

This continues our national strategy of bringing transparency to health care not only on our home site, but also in partnership with other news organizations, including WVUE Fox 8 Live and NOLA.com I The Times-Picayune in New Orleans;  The Philadelphia Inquirer, The Daily News, philly.com and 6ABC Action News in Philadelphia; KQED public radio in San Francisco; KPCC public radio in Los Angeles; WLRN public radio in Miami; WUSF public radio in Tampa-St. Petersburg; their Florida partnership, Health News Florida; and MedPage Today, a provider of news, opinion and medical education to 670,000 providers. Read about our national partnerships here.

We had a previous partnership in Philadelphia with WHYY public radio, which ran for several months in 2015 and then went into hiatus. Read about that partnership here. Our pilot with WNYC public radio in New York took place in 2013.

This post from NiemanLab describes our partnership in New Orleans with WVUE FOX 8 Live and NOLA.com I The Times-Picayune, our largest to date.