Urgent care tales: After his fishing accident, his first call was to his insurer 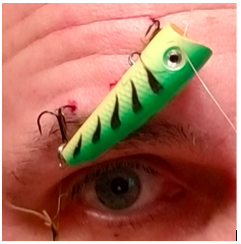 “Unfortunately, this is not a fish story.

“Two summers ago, while fishing on a lake in upstate New York (I’m from Westchester) I had a bit of a mishap. I cast my lure into a bed of water lilies, and gave the line a hard, impatient tug to retrieve my lure. Sure enough, the lure came loose and flew across the water on a line directly aimed at my head. Before I could react, the lure was firmly embedded in my forehead. The good news? The hooks narrowly missed my eye. The bad news? I was alone and out of my healthcare network.

“The sad part of this accident was that after unsuccessfully trying to remove the hooks from my head, my first call was to my insurance company. Not to my wife or to 911. I called my insurance provider and explained the situation. The representative asked me if I was able to drive, and after I replied in the affirmative, informed me that there was a hospital emergency room about 20 minutes away.

So is this an emergency? We can’t tell you

“I should add that at that time we were on a platinum level family plan, paying approximately $2,000 a month for healthcare coverage.

“I considered my options. If I drove myself to the emergency room and the procedure of removing the fishing hooks was NOT considered an emergency (a likely situation, given that I was not bleeding and not in great pain) I would on the hook (sorry, could not resist) for emergency room costs. How much? Possibly several thousands of dollars. Likely a minimum of a thousand dollars. My other option was to get in the car and drive until I was in my geographic network, a drive of probably 3 hours.

Painter’s tape to the rescue

“So, I responded to the rep that I would instead drive to an urgent care center in my network coverage area, and given that it was now getting late in the day, I would do that in the morning. The representative seemed a bit surprised, but she could not dissuade me from pursuing this plan. I called an urgent care facility in my network, explained the situation, and made an appointment for the following afternoon.

“I stabilized the lure with blue painters’ tape that I found in the basement, went about my business for the rest of the afternoon and evening. I slept on my back wedged in with pillows so I wouldn’t roll over and do any additional damage.

“The next day I drove home, with a brief stop at my in network urgent care center. The doc and a nurse practitioner were able to remove the hooks without too much trouble, and I was on my way. The cost? $55.

“If the hooks had lodged themselves in my eye, I certainly would have gone straightaway to the ER, regardless of the cost. But I was fortunate, and able to pick a course that was not so financially onerous. And, the lesson learned? Always wear a billed cap when fishing.”