Coronavirus (Covid-19) antibody testing: How does it work? I did it, and I’ll tell you what it was like.

Coronavirus (Covid-19) antibody testing: What’s it like? I did it, and I’m here to tell you about it.

I went to a Stop and Shop grocery store parking lot on a sunny Saturday afternoon, April 25, to get tested.

The parking lot is in the Bay Plaza Shopping center at 2136 Bartow Ave., in The Bronx, the northern borough of New York City. The shopping center is in Co-Op City, a vertical city — a big housing development that is home to around 45,000 residents. The Bronx has one of the highest rates of infection in the city, and that’s probably why the testing site is there.

I found out about the testing from a local Moms Facebook group, where an acquaintance posted the presence of a pop-up antibody (serological) testing site run by the New York State Health Department. The site is about 13 minutes’ drive from my house in southern Westchester County, New York. The woman who posted said she was there at 10:30; I found out about it at 2:15 and hit the road.

Why did I get tested?

My southern Westchester village, Pelham, is right next to New Rochelle, the small Westchester city that was the start of the biggest New York outbreak in early March. Pelham also borders on New York City, the current center of the pandemic in New York and indeed the nation and perhaps the world.

New Rochelle was the site of one of the nation’s first drive-through testing sites, at Glen Island park, where workers take swab tests of the respiratory tract to check for presence of an active infection.

In late April, the New York State Health Department began a large-scale study, using serological testing (blood antibody testing) to analyze 3,000 people across the state in order to determine what percentage of New York’s population has actually had COVID-19 — checking not for presence of an active infection, but instead for exposure to the antibodies. “That will tell us, for the first time, what percent of the population actually has had the  coronavirus and is now at least short-term immune to the virus,” Governor Cuomo said during a press briefing. “Any plan that is going to start to reopen the economy has to be based on data, and that means it has to be based on testing. This is a new world for all of us.”

Temporary testing sites were set up in 20 grocery stores scattered throughout the state, including at least one in each borough of the city. Consenting patrons were selected at random to provide fingerstick blood samples for serological testing. The governor said the samples will be tested by Wadsworth Center, a state-run lab in Albany. The test being used was developed by the Wadsworth Center and has received emergency FDA authorization.

Why did I do it? I live in the center of the pandemic. I have had a few symptoms — drippy nose, muscle aches and pains, but nothing serious. We have also been hearing increasingly through our reporting that people who have no symptoms can be carriers of the virus. We are in lockdown here, not leaving the house — though I have been in New Rochelle for medical matters off and on since the start of the year. Since I almost certainly have been nearer the virus than most, it seemed to make sense. Also, I’m happy to contribute a few drops of blood for scientific inquiry.

When I got to the parking lot, I saw a long line of people in masks at the appropriate 6 feet away from each other. Several people in masks were directing traffic of cars and people.

The line stood on the sidewalk next to the Stop and Shop; when it was your turn, you could enter the parking lot, where a smaller line snaked around a mini-square surrounding the testing venue — a handful of folding tables, with lines set off by upended grocery carts and yellow caution tape.

I met several people from my village, who found out about the site the same way I did, on the Moms Facebook group. There was also an assistant principal from a Bronx school who told us how hard distance learning is on his students. He thought he’d been ill right after the schools closed in March.

When it was your turn, you stopped for an employee who filled out a form with your drivers license ID information and your phone number. The multicolored, several pages of paperwork was marked “Newborn Screening Program — Serving New York Since 1965.” It also bears the name of the Wadsworth Center of the New York Department of Health, where Gov. Andrew Cuomo has set up the testing analysis.

After talking to that form-filler, you were let into the testing enclosure to talk to two people at a folding table who entered your data into laptops. Then you were directed to wait until one of the three test-takers had a spot at her folding table. 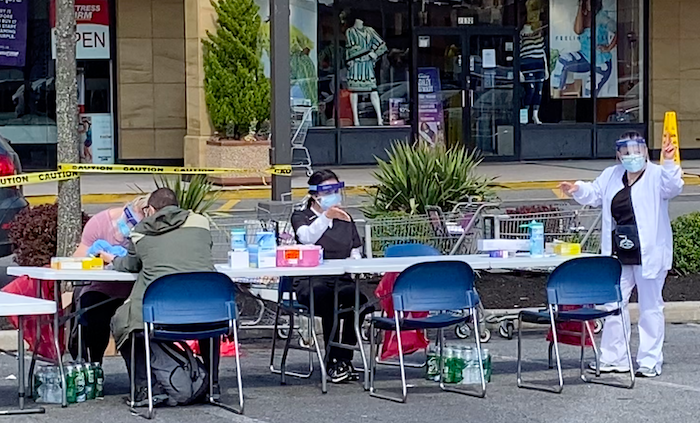 When you were done, she put on a Band-aid and released you to the final table. At that final table, you signed and dated a release. (I forgot to get a copy.)

Each of us got a pink form with our lab I.D. number and an explanation, intended for parents, of the Newborn Screening Program. It also has an email address and phone number of the lab.

All four of the employees I spoke with said they were from Execusearch, a temp staffing group based in New York city. Several of them had been working at the Glen Island temporary coronavirus testing facility, apparently under contract with the state.

I asked one where she would be the next day (Sunday) and she said “back at my day job.” I asked if she was moonlighting at the Co-Op City site, and she said yes.

There was one man with New York State Department of Health dogtags — I didn’t get his name, but he seemed very busy.

Results: They said they’d text or call with “negative” or “positive” in 4-5 days. If we don’t hear, we can use the phone and email on the form to check for results.

It’s hard to get a test, and it seems very flukey that I got one.

At the parking lot, the people directing traffic said there was a separate site nearby for by-appointment federal testing. “It’s behind the movie theater,” the security guy said. I drove by, but didn’t see anything.

Are the tests useful? We and others have written about that. See here  about accuracy of nasal swab tests, and here and here about antibody tests.

One of the problems is that it’s not clear if the tests are accurate: There are a number of tests on the market, some with emergency FDA approval and some with no approval. It seems obvious that a New York State test from the Wadsworth Lab is more reliable than a test from Mens Health in Texas, but … there’s not a lot of documentation on any of them yet.

Also, scientists aren’t sure what it means if you have antibodies. That suggests that you have been exposed to the virus, although some tests appear to be sensitive to more than one set of antibodies.

Also, if you have antibodies, are you immune? Scientists don’t know.

The New York City Health Department sent out a warning this week to medical providers, warning them about the lack of evidence on what the tests do and what they mean. 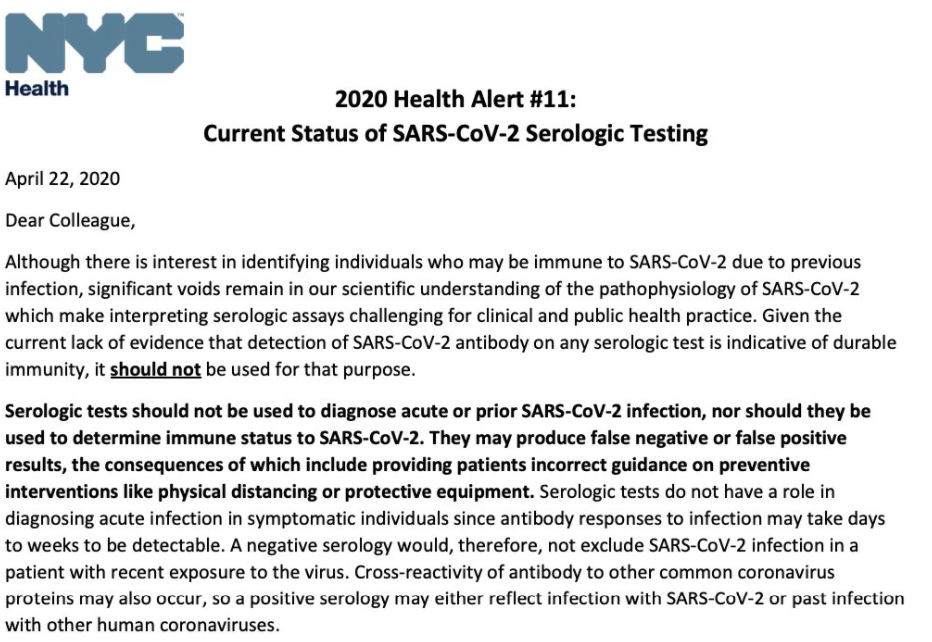 Mark Levine, chair of the New York City Council Health Committee, tweeted: “This test still can still be useful for useful for [sic] determining overall trends in the population. They just shouldn’t be used for making personal health decisions.”