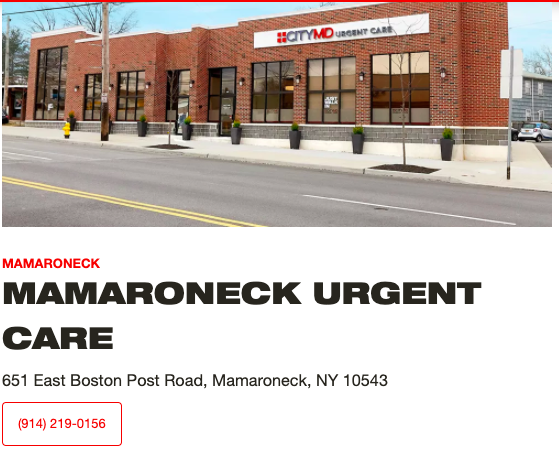 By JEANNE PINDER and PHOEBE PINDER

We went to CityMD Urgent Care in Mamaroneck, N.Y., just north of New York City, on May 10, Mother’s Day morning, to get coronavirus (Covid-10) antibody testing.

Jeanne (mom) and Phoebe (daughter) were the only people there besides two women behind the desk, and at least six other employees, so we didn’t really have to wait.

We had to acknowledge several things on the check-in at their iPad kiosk: Permission to treat, permission to use our personal health information as CityMD sees fit, acknowledgement that we would pay if something is not covered.

There was not an option to print these permissions, and when Jeanne asked for a copy, they told her to call the “Aftercare” number at 516-342-7075.

A quick interview with a doc was followed by a phlebotomist visit. As she prepared to take blood, Jeanne asked her where it would be processed. She said “we send to Quest or Labcorp, whichever is better for your insurance.”

Who’s processing it? We don’t know.

What follows is from Jeanne:

I told her I wanted to be assured that it would be processed by Abbott Labs, and she said she didn’t know for sure — at the beginning of the testing, it was all Abbott Labs, she said, but now she thinks there might be another. This matters, of course, because some of the tests are better than others. Here’s a technical FDA page listing the documentation for tests that have received emergency use authorization.

“They are all the same,” she said, explaining that none of the tests have been assessed on humans.

I told her that is not strictly true, that I’m a journalist and they had to have some testing on humans or they couldn’t get emergency use authorization from the FDA. She seemed taken aback, and asked if I am writing about this. I said yes.

She did take a vial of blood. I asked if I could find out where it was processed and she said she doesn’t think so.
I told her the reason I came to CityMD was to be sure it would be using the Abbott test, which is said to be among the more reliable ones. (There are a lot of unreliable tests out there.)

I told her that I came to CityMD to be sure I was getting a more reliable test, and she said, “That’s above my pay grade.”

Physicians and physician assistants were in full protective gear, complete with face masks. No one seemed very much in a mood for talking. While we were there, two other people came in, also for antibody testing. Contrary to what Jeanne was told, I was told that results would be available in 3 to 5 days.

Why did we do it?

There are a lot of questions about the validity of the tests — do they actually sense the presence of antibodies to coronavirus? Well, it depends. See what we’ve written here and here.

Then assuming they do sense antibodies, do those antibodies guarantee immunity? Most experts say we just don’t know yet — the virus is new, and it’s being studied.

Then why take the test? Well, Jeanne was tested for antibodies under the New York State Department of Health pop-up testing program on April 25. On April 30, She got the results: she was positive on that test. But the truth is that she never really had symptoms, or never had significant symptoms. So she wanted to check for sure.  She wrote about it here.

Also, with the tests being perhaps not so reliable, would she be positive on one and negative on another? Inquiring minds want to know.

Also, if Jeanne did actually develop antibodies without a significant set of symptoms, is Phoebe also in the same boat? We’ve been on lockdown here north of New York City since early to mid-March, and when we venture out to the occasional grocery-store visit it’s with full mask and gloves. (Or for a run or a walk, properly social distancing.) So we’re not getting or giving virus to anyone. But still, one wants to know.

Who will pay? We’ll see. The guidance we got from CityMD was murky.

Federal and state laws passed earlier in the crisis mandated testing with no co-pay for diagnostic purposes. But in some cases, we heard that the provider construed antibody testing not to be diagnostic, and sought to charge for it.

This is the description of the state of play from the respected journal Health Affairs: “The Families First Coronavirus Response Act (FFCRA) was passed by Congress on March 18 and mandated that Medicare, Medicaid, and private insurance plans cover COVID-19 testing and administration costs without cost-sharing. A frequently asked questions document published April 11 by the Departments of Health and Human Services (HHS), Treasury, and Labor specifies that FFCRA also requires health plans and health insurance issuers to cover COVID-19 serology testing. Under the Act, states have the option of providing limited Medicaid coverage to the uninsured for COVID-19 diagnostic testing, including serology testing. However, the law does not require COVID-19 serology testing to be provided free of charge to all uninsured individuals. ”

Phoebe got a printout of instructions for accessing the CityMD patient portal to get results, and we left.

Jeanne’s instructions for accessing the CityMD patient portal were waiting in her email when we got home.

Update: We both tested negative

Just what it says: Both of us are negative. The tests seem to have been processed at Quest Labs. No data was included, just a negative result.

This wouldn’t be noteworthy except for the fact that Jeanne tested positive both at the New York State Department of health popup site in The Bronx on April 25, and also at Stony Brook University Medical Center on May 11. Read the rest of our coverage for details.

Update: I registered for as many plasma donation programs as I could find. The first one, at Stony Brook University, signed me up and I went to their research center for an antibody test on May 11. They told me I had antibodies, but “not enough” to donate.

They did say that I could come back in a week, because sometimes antibodies go up and sometimes they go down. I went back in a week, and the antibody count had gone down, so they threw me out of the program. Stony Brook uses a ChemBio test.

The New York State test is processed at the Wadsworth Lab, a state institution.

The Weill-Cornell plasma donation program, in partnership with Columbia, called me back and said they are accepting donors only with confirmed positive respiratory tests. They said the researchers had asked to expand the study to people with positive antibody tests, and if they get permission, they’ll be back in touch.

Mount Sinai, Rockefeller and Northwell Health didn’t get back to me.