Coronavirus (Covid-19) risks: How to know them and avoid them as the nation reopens 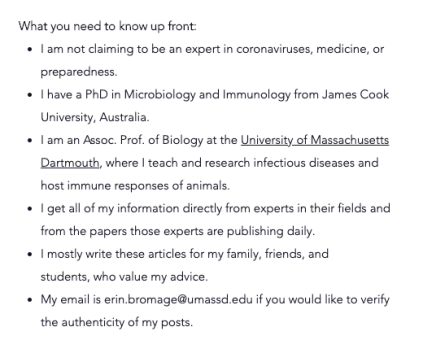 “It seems many people are breathing some relief, and I’m not sure why. An epidemic curve has a relatively predictable upslope and once the peak is reached, the back slope can also be predicted,” Erin Bromage, a professor of biology and immunology, writes in a guide to the risks of getting infected with Covid-19 during the nation’s reopening that has been viewed more than 20 million times on his blog. “We have robust data from the outbreaks in China and Italy, that shows the backside of the mortality curve declines slowly, with deaths persisting for months. Assuming we have just crested in deaths at 70k, it is possible that we lose another 70,000 people over the next 6 weeks as we come off that peak. That’s what’s going to happen with a lockdown. As states reopen, and we give the virus more fuel, all bets are off. I understand the reasons for reopening the economy, but I’ve said before, if you don’t solve the biology, the economy won’t recover. There are very few states that have demonstrated a sustained decline in numbers of new infections. Indeed, as of May 3rd the majority are still increasing and reopening. As a simple example of the USA trend, when you take out the data from New York and just look at the rest of the USA, daily case numbers are increasing. Bottom line: the only reason the total USA new case numbers look flat right now is because the New York City epidemic was so large and now it is being contained. (as of May 3rd). So throughout most of the country we are going to add fuel to the viral fire by reopening. It’s going to happen if I like it or not, so my goal here is to try to guide you away from situations of high risk.” Erin Bromage, “The Risks – Know Them – Avoid Them,” Erinbromage.com.