Coronavirus (Covid-19) and the restaurant: Workers policing owners, and sometimes getting fired

Restaurant and bar workers, and big-box store workers, are taking to social media like Reddit and Twitter to announce that their workplaces may not be safe for patrons because they have not been honest and pro-active about dealing with cases of Covid-19. 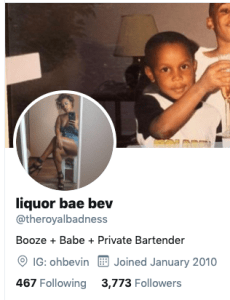 This happened on Twitter: A Houston bartender, tweeting as @theroyalbadness (Liquor Bae Bev), warned people that if they had visited a certain Houston bar/restaurant, they should get tested for Covid-19. Then she announced that she had been fired for that Tweet.

“If you have been to Taste Bar and Kitchen in the past 3 weeks. I would highly advise you to get tested for COVID immediately and quarantine.”

Five hours later, she tweeted “Update: I got fired for this post.”

The restaurant closed, announcing it was testing employees for Covid-19, and joining a list of Houston eateries that did the same thing. Here’s a story about that in Culturemap Houston. 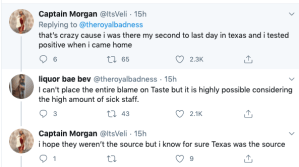 Another Twitter user responded: “I hate this happened to you. Bombshells has the same issue. People testing positive and managers tell them to stay home but never report it to the CDC and close for the mandatory 2 weeks 😩”

A Twitter user named @misanthropoetry replied, “This is happening all over AZ, too. We need a hashtag we can use for restaurants and bars and stores where people are getting sick and they’re trying to keep it quiet so people will know not to go there. Thank you for speaking out, I’m sorry you got fired for not being an a$$hole” 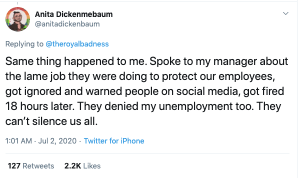 The incident is one in a string of similar ones playing out all over Twitter, Reddit and other social media, as restaurant workers, patrons, retail employees and others announce Covid outbreaks as a warning to others. The restaurants then often take to social media to announce measures or defend themselves.

The Houston bartender, Bevin Biggers, is known as an activist in Houston. She rented a truck and handed out water and snacks during the George Floyd protests recently, according to a story on Eater.

The Houston bartender also posted a thread on Twitter listing places that had been closed. There is no source listed, but she said the information came from a Google document that has restricted access.

Another Twitter user asked her where the information came from, and she answered, “A group of industry workers including myself.”

Bar and restaurant workers nationwide are encountering this issue, and patrons are too.

This post about a Coralville, Ia., restaurant is from the r/IowaCity subreddit in late June:

4 servers from Texas Roadhouse in coralville have tested positive for covid.
The store manager hasn’t really addressed it beyond sending a staff message to wash your hands. The front of house managers and shift supervisors have posted pictures of them in crowded places like the Ozarks or bars where no one is wearing masks. Many of my coworkers frequently go to the bars without masks then will often not wear their masks at work unless in the dining area. We work in very close quarters and though some of us try to take precautions, the others who don’t are putting us at risk. It’s very likely that it has spread beyond the 4 who tested positive.

Felt like it was the responsible thing to at least put this out there.

Posting from throwaway account cause my other account has my name in it and in the very unlikely chance this somehow makes it to management I don’t want to lose my job.

Edit: they ended up deciding to close the store for monday and tuesday

Update pt.2: they’re referring back to only curbside pickup for the rest of the week

That was followed by this post, also in the r/IowaCity subreddit:

Edit; As requested I know employees personally from Mellow Mushroom and Summit that have also tested positive for COVID. I will continue to update as I learn more.

Iowa is one of a few states that never issued a statewide stay-at-home order. Gov. Kim Reynolds, a Republican, said she trusted Iowans to “do the right thing.”

The diner said on its Facebook page: “Dear Pullman Customers and Iowa City Community,
Last week it came to our attention that two employees of Pullman had tested positive for COVID-19. Ownership immediately placed the two employees on paid sick leave and informed all other staff of the positive cases on our team. We encouraged all employees who had been in close contact with the COVID-19 positive team members to get tested. All team members who subsequently obtained testing were found to be negative for COVID-19. Throughout the COVID crisis, we have been in close consultation with Johnson County Public Health officials and have strictly adhered to CDC guidelines and recommendations https://www.cdc.gov/…/…/if-you-are-sick/steps-when-sick.html.”

And in the conversation that followed, management was asked if it had fired an employee for asking for better safety measures. Management responded, “Absolutely not. We had an incredible discussion today with the entire staff about safety, protocols feelings all of the above. All because of that employee asked us to do it.. He knows why he was let go, which was a unanimous decision by our entire leadership team, not just me. I’ll remember him for being a great teammate and a hell of a good cook/employee. One lapse in judgment doesn’t define his time at Pullman. He also knows if he needs anything he can reach out.”

A string of Iowa closings was discussed in this thread.

Also in the Iowa City area, an Olive Garden in Coralville was mentioned on Reddit:

“First off this is a burner account to keep both my source and I anonymous. I have a source saying that Olive Garden in Coralville is having an outbreak among staff. I am aware that staff is being left in the dark about how many of their coworkers are getting it by management. Staff are still working while waiting on test results. Some may be working with symptoms. It appears the higher ups there do not want it getting out to the public even as other restaurants and bars are being more transparent about the situation. Just felt the need to share if you are thinking about going there in the near future.”

A coffeehouse in Madison came under fire on social media when two employees claimed they had been fired for insisting that patrons wear masks. A restaurant in Chicago that had planned to re-open changed its plans after employees wrote on Facebook about why they thought that was a bad idea. We wrote about them here.

This is not confined to restaurants alone. A Target in an unnamed city brought this post to the subreddit r/legaladvice.

“My Target has four confirmed COVID cases and told us not to say anything lest they pursue the whistleblower for a lawsuit. Am I protected if I report it to my city’s health department?”