Coronavirus (Covid-19) and schools reopening: What is going on with NYU’s quarantine meals? 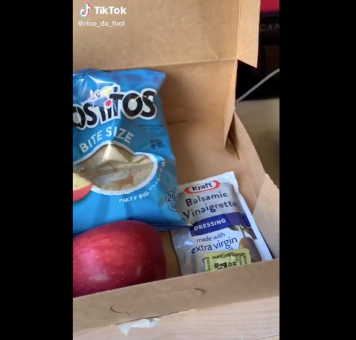 The TikToks from New York University students started going viral last week. One, marked “Dinner at N.Y.U. Quarantine 😍😍😍,” showed a student receiving just an apple, a bag of Tostitos, and a packet of salad dressing for dinner. In another video, a student receives all her day’s meals at 6pm – with one consisting of just a cup of cereal (no milk) and an orange juice. The students’ grievances have since blown up on social media, causing public shaming for N.Y.U. and prompting the university to scramble to fix the situation.

As N.Y.U. struggles with the fallout from its meal disaster and lurches towards the end of quarantine and classes beginning on September 2, what’s next? ClearHealthCosts talked to N.Y.U. students on Twitter about the school’s failure to feed its students, how the university has responded, and student organizing efforts to feed fellow students.

What Students Expected – And What They Got

When Sean Nesmith returned to N.Y.U. from Georgia on Aug. 19, he knew that he would have to quarantine for two weeks. The university, he said, wanted Nesmith and the other 2,600 quarantining students to “only leave the room to get tested or for medical reasons” – and that the buildings would, as a result, provide them with two to three meals per day.

But the experience thus far with dining has been a “rocky rollercoaster,” Nesmith told ClearHealthCosts. On the first day, his first meal came at 2 p.m. and the second at midnight – far outside the timing N.Y.U. had laid out for students in an email. And those first days, Nesmith said, “my meals consisted of any assortment of chips, pastries, and fruit, but never anything substantial,” he said.

“For several days I was only getting two ‘boxes’ and most of them didn’t have anything substantial, as opposed to the three meals they promised,” he said. “One of my boxes had tortilla chips, a boiled egg, and an apple – for ‘breakfast.’”

Eduardo, a second year returning to N.Y.U. from his home in Texas (who spoke on condition we only use his first name), had similar expectations of the school: he was told he would receive three meals a day and snacks that would adhere to any dietary restrictions.

“For the first four nights my dinner came in between 9-9:30,” he told ClearHealthCosts over Twitter DM. After seeing the chaos from his social media around students not getting food, “I ordered food on my first two nights because I was afraid they had forgotten about me.”

After students began complaining en masse and the subpar meals began going viral on TikTok and other social media platforms, N.Y.U. released a statement last week. In the statement, the school placed blame squarely on the shoulders of contractor Chartwells Higher Ed, a division of Compass Group, the largest food service company in the world. (Last year, Chartwells came under fire for using a staffing service that provided unpaid labor as part of a drug rehab program to staff school cafeterias in Louisiana.)

“We are disappointed in Chartwells’s management of the quarantine meals process,” the school said in the statement. “We and Chartwells are correcting the situation promptly.” The statement says the school was adding more staff to make and deliver meals more promptly, would allow staff in residence halls to order delivery for students missing meals, and reimburse students who ordered meals when theirs were missing.

Students told ClearHealthCosts that meals seemed to have improved in the days since the statement was released. “[On Sunday] I got a sandwich that came in a black box and it was a lot higher quality than my other meals,” Eduardo said.

And Nesmith said that the school’s increased response – adding a hotline for students to call as well as a Google form that allows students to flag which meals they’re missing or have problems with – has been promising.

However, both Nesmith and Eduardo said they’re both still seeing issues with food service days after the initial blowup – and don’t trust the school to deliver. Nesmith says he has a friend who was still missing meals over the weekend, and was told the hotline couldn’t take complaints after 11 p.m. “I ended up leaving a pot and a bag of ramen by her door but they never ended up coming,” he said. “I question their ability to achieve any immediate help.

“It’s unfortunately up to us to make sure that we’re getting the meals respective to our dietary restrictions, that we’re getting reimbursed, that we’re getting water and three meals, etc,” he continued. “By design, N.Y.U. makes us those type of people, to be self-advocates, but certainly from toxic, unhealthy environments like this are we taught those lessons.”

As for Eduardo, N.Y.U.’s attempts to make up for their missteps with sweet treats – like Insomnia Cookies that came in one of his meal boxes with an apology note – aren’t appreciated.

“They keep giving us a lot of sugar to try to appease us but what we want is nutrients,” he said.

Students Organize to Feed Each Other

While the school scrambled to address the issue, N.Y.U. students began organizing to take care of their classmates. On social media, students have circulated threads offering food delivery and other aid to quarantining classmates.

The group N.Y.U. Share Meals, which was originally started to allow students to share unused meals with other students, has been spearheading much of the effort. The group is currently running sign-up forms for students to both receive meals and volunteer to deliver them to their classmates.

“Food insecurity at N.Y.U. is not new and continues to affect an unacceptable number of students in our community,” the group said in a statement issued a day after the university’s. “In a pivotal moment like this, it is especially disturbing to see the university fail at the essential duty of feeding their students.”

Noa Baron, a junior quarantining at an apartment off-campus, has been helping coordinate student signups for food deliveries to their classmates.

“Lots of students are here on scholarships or loans, and can’t afford to order in every day or get groceries delivered,” they told ClearHealthCosts. “I’m happy to see fellow students stepping up for one another but we shouldn’t have to.” (On Tuesday, Baron told ClearHealthCosts that the N.Y.U. administration has since issued $30 Grubhub gift cards to each quarantining student each day in addition to meal delivery.)

Nesmith told ClearHealthCosts that the student-led mutual aid effort “has definitely helped,” and that he’s been sending money to friends in the building and others using the crowdsourcing documents provided by N.Y.U. Share Meals to help others get food.

“N.Y.U. has a lot of routes to provide students with scholarships (mostly full ride, or like me, 75% covered) but for a lot of us, there’s minimal room for financial error,” Nesmith told ClearHealthCosts over Twitter DM. “Having food delivered and groceries is so expensive and people are relying on the food that they promised to provide to hold us over until the meal plan starts on September 2nd.”