Coronavirus (Covid-19) and surveillance testing: What makes a monitoring program effective, for schools, sports or the workplace? 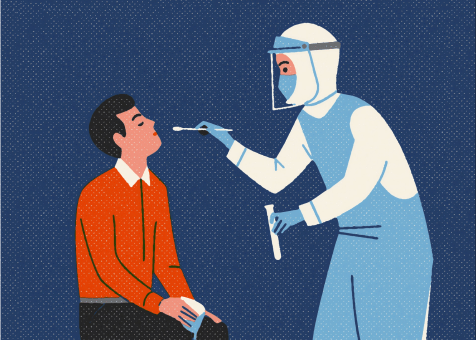 - photo by United Nations on Unsplash

By BEN GLICKMAN and PHOEBE PINDER

On the field, Dr. Anthony Fauci threw out the ceremonial first pitch of the first game of a modified and renewed Major League Baseball season on July 23. Off the field, the sports organization took one piece of advice from Dr. Fauci to heart: the importance of testing.

In a 101-page Operations Manual published in late June meant to ensure a safe return for baseball players and staff, M.L.B. outlined its new protocols and procedures. At the center of the return is routine testing.

Per the manual, players and coaches will be tested for Covid-19 every other day, and other staff will be tested several times per week. Tests will also be available for anyone who lives with staff.

In the first week of the season, M.L.B. saw its first outbreak. In late July, at least 17 players and coaches tested positive from the Miami Marlins, causing several games to be cancelled.

Dr. Fauci, director of the National Institute of Allergy and Infectious Diseases, has said that surveillance testing — the random and routine screening of the population to detect community spread of Covid-19 — will be essential for a return to in-person activities across the board, including sports, colleges and schools.

Surveillance testing is meant to find cases of Covid-19 before the disease can spread. Once a positive case is discovered, exposed individuals can isolate themselves to avoid infecting others.

As organizations plan their return to the office, field or classroom, many have released plans for surveillance testing, but the details of these plans vary. Different organizations will test different amounts, and some will supplement with other measures like temperature checks.

Plans across the board

The N.B.A. announced in June that it would adopt a “bubble” plan, where all games will be played at Disney’s ESPN Wide World of Sports Complex in Florida and players will be isolated.

During the season, which began on July 30, the N.B.A. is testing players daily, but is not testing Disney workers within the bubble. The N.B.A.’s plan also includes rigorous isolation for any players who test positive. USA Today reported positive reactions to the plan from epidemiologists, with one expert saying the plan was the most comprehensive one he had seen.

The N.F.L. has similarly committed to daily testing for at least two weeks during training camp. Major League Soccer tested players, coaches and staff every day for the first two weeks of their restarted season, and continues to test them regularly.

Meanwhile, colleges and schools say they cannot afford to test at the same frequency as sports organizations.

Colby College in Maine plans to test students and staff twice a week for the duration of the fall semester, but that level of testing comes at a cost: The Washington Post reported that the college may spend as much as $2.5 million on routine testing for its staff and 2,000 undergraduates.

A wave of colleges and universities have announced new plans to operate entirely online in the fall, including the University of California, Berkeley, Dickinson College and Emory University, eliminating the need for testing on campus.

K-12 schools also may not routinely test students at all. Interim guidance from the U.S. Centers for Disease Control and Prevention recommended that K-12 schools not universally test students, instead suggesting that administrators focus testing resources on symptomatic and exposed individuals.

Plans vary widely in their protocols for surveillance testing, but how will this affect efforts to curb the spread of Covid-19? What makes a testing plan effective?

While colleges and K-12 schools will not begin implementing testing plans for several months, summer camps have already opened. Their surveillance testing — or, more accurately, their lack thereof — provide an early insight into how some plans might fare in the future.

The results have been underwhelming.

Two YMCA summer camps in Georgia were forced to shut down because of coronavirus outbreaks. The camps shut down in late June after a single counselor tested positive for Covid-19, but in the weeks following the closure, the number of cases connected to those two camps rose to 260, as detailed in a CDC report. Three-quarters of the campers and staff for whom the CDC obtained results were positive for Covid-19, according to The Atlanta Journal-Constitution.

The camps’ safety procedures included screenings for campers and counselors and a negative test before arrival. Lauren Koontz, the President and CEO of YMCA of Metro Atlanta, the organization that oversaw the camps, said that they “collaborated with the Centers for Disease Control and the American Camp Association and followed the safety guidelines and protocols of the Executive Order from the State of Georgia” in order to prepare for camp. She also said that the counselor had passed all of the camp’s protocols upon arrival to camp.

A separate YMCA location in Atlanta closed after an individual with Covid-19 passed through the site. The individual had no symptoms, according to the YMCA, and, like the counselor, passed all of the mandatory screenings and safety protocols.

The safety protocols posted on the camp’s website did not say they would test individuals at all after arrival, but would conduct temperature checks.

Guidance from the C.D.C. on summer camps does not recommend testing campers regularly. Instead, the agency emphasizes reducing close contact between campers and cleaning common spaces.

A different camp in Missouri was the source of a similarly sized outbreak. More than 80 campers, counselors and staff from Kanakuk K-2 Camp in Lampe, Missouri tested positive for Covid-19, leading the camp to close for the summer. Kanakuk Kamps, the owner of the camp, has not shut down its seven other locations.

The camp’s safety protocols include a number of measures, but does not include regular testing of campers. Like the Georgia YMCA camps, Kanakuk Kamps conducts daily temperature checks.

Other camps are testing campers only after they exhibit symptoms. Pine Cove Christian Camp in Flint, Texas, wrote in health and safety protocols posted to its website the camp would test symptomatic campers for Covid-19, as well as perform temperature checks and ask campers to quarantine before arriving at camp.

At least 76 confirmed cases have been linked to the camp so far. The camp has shut down some of its age groups, but others remain fully operational.

Researchers at the University of Colorado and Harvard University recently carried out a study using computer modeling and medical knowledge to determine the factors necessary for a successful surveillance testing plan.

“When you take a COVID test as part of a surveillance or screening regiment, there are three factors that are coming into play,” study co-author Daniel B. Larremore, an assistant professor at the University of Colorado Boulder in the BioFrontiers Institute, and in the Department of Computer Science, told Clear Health Costs in a phone interview. “How often do you get tested? What is the limit of detection, or so called analytical sensitivity of that test? And how long does it take to turn around your test and get you some results?”

After examining multiple combinations of testing scenarios and taking into account the fluctuating amount of virus in a person’s system over time, researchers ultimately determined that the test limit of detection (i.e. test sensitivity) mattered less than they had initially thought, but that frequency and turnaround time were particularly important.

“None of the tests we looked at would be highly effective if used less than once a week,” said Larremore in an interview. “And test turnaround times really limit the impact of an otherwise good testing regimen. Imagine that you’re infectious for a full week, and you happen to get tested on let’s say, day two of your infectious period. We missed you on day one, but we tested you on day two, so already, you’ve been infectious and out there for a day. But if that test takes three days to turn around, now you’re getting your results back after four days of being out there and infectious out of the total of seven. And if those delays extend to, you know, a week or more the tests that we’ve given you really isn’t giving you the information that you need to protect the people around you in a timely way.”

Larremore emphasized the importance of noting that different types of Covid tests serve different purposes. Extremely accurate tests are important for clinical testing and diagnosis. These tests can be costly, and typically have a turnaround rate of a few days. Currently, these types of tests are being used nearly universally. However, for surveillance testing purposes, the researchers of this study believe that less accurate but highly available and rapidly processed tests are the best option.

“Because we’re talking about testing regimens,” said Larremore, “all we really care about is the sensitivity of the testing regimen to detect people and give them the ability to isolate. By stacking the tests regularly, we don’t so much care about how good a single test is, but instead care about how sensitive that whole regimen is. And in that case, the tests that we can use can be cheaper and lower sensitivity as an individual test. But when stacked at cost, they have a higher regiment sensitivity.”

An ideal surveillance testing plan, according to Larremore, would require everyone to test preferably several times a week, and would involve tests “as cheap as a fancy cup of coffee, or a beer.” These tests would also have a very rapid turnaround rate, as Larremore says “even if you test people regularly, if you start to delay their results by two or more days, the test is no longer useful for screening.”

Pool testing involves combining samples from patients and testing them together in one tube. If the results are negative, then doctors know that all of the patients in that pool are negative. If the sample is found to be positive, the doctors test each patient within the pool individually. The strategy has been used to test for diseases in blood banking.

One study from the University of Nebraska Medical Center found that by using pool testing, researchers could expand testing capacity by 133 percent, conserving precious testing resources.

According to Larremore, one of the three important factors in effective surveillance testing is rapid turnaround for results. Pool testing may also address that.