Coronavirus (COVID-19) and the symptoms: It’s not just shortness of breath and fever 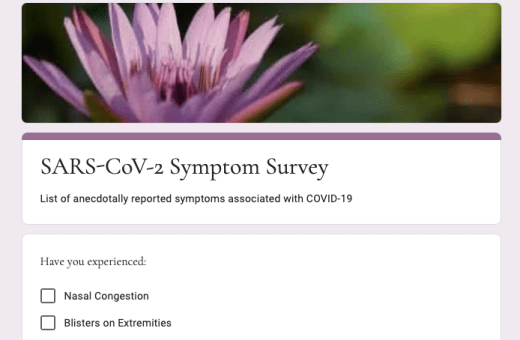 While early in the coronavirus (Covid-19) pandemic the most common symptoms were thought to be a fever, shortness of breath, dry cough and other respiratory issues, the experiences of others and long-term suffers of the illness demonstrate a wide array of other symptoms including extreme fatigue, hair loss, body aches and pains and even surprisingly low temperatures.

Some people have experienced heart issues, like tachycardia. Gastrointestinal symptoms are fairly widespread too. So is the condition with the murky description of “brain fog,” which patients described as so varied as forgetting words or just simply being back in concentration or forgetting the keypad numbers for a familiar lock.

Since Covid-19 has not been around for that long, there’s not a great deal of medical literature about the range of symptoms. But as patients gather together and compare notes in a series of online forums, the outlines of a wide-ranging list of symptoms have become clear.

Patients have talked about symptoms as disparate as numb tongue, bleeding gums, testicular pain, numbness in joints, rashes and bruises, conjunctivitis, swollen toes, loss of the sense of taste or smell and even phantosmia, smelling smoke or bleach or gasoline when none is present.

“The symptoms were like a game of whack-a-mole. Different ones would surge at different times and in different places in my body,” one patient wrote of the experience in a study conducted by the Body Politic support group early in the pandemic.

The study, conducted among members of the group, is the biggest patient-conducted study so far. It listed 62 symptoms. The study, dated May 11, is currently being updated.

One group on Facebook, the Covid Long-Haulers Discussion Group, put together a survey for members about their symptoms. Here is the survey, listing more than 100 symptoms.

It’s not clear how many patients continue to suffer symptoms for months, or why some recover fairly quickly.

Symptoms of COVID-19 can affect patients for a very long time, as explained in this NBC news article, and this Forbes article.

“A few formal studies have hinted at the lingering damage that COVID-19 can inflict. In an Italian study, 87 percent of hospitalized patients still had symptoms after two months; a British study found similar trends. A German study that included many patients who recovered at home found that 78 percent had heart abnormalities after two or three months,” Ed Yong wrote for The Atlantic.

“According to the report, about a third of people who test positive for COVID-19 do not return to their baseline level of health in the two to three weeks following their initial diagnosis. Among a subset of coronavirus patients in the 18-34 age range, the study found that one in five were unable to return to their usual state of health, assuming that they had no previous chronic medical conditions.”

The full CDC report is here.

Patient expressed extreme frustration over the changing list of symptoms, and also about reactions of doctors, family members, friends and others to their complaints.

Andrew Ficker, 28, of Orlando, Fla., said in a phone interview that his symptoms begin in July, and sent him to the emergency room five times. On the third time, he said, doctors told him that his records suggested he was actually fine — that his symptoms were all in his head.

“They said, ‘It says on your file you might have anxiety. Do you want to go to a mental hospital or do a 72-hour hold, that we can get you some Xanax or something?’ I said, ‘No, I need to do another EKG or something — I don’t know what I need, but I’m not OK.’ They said come back if it gets worse. And I went back a few hours later, and it was getting worse, and they admitted me for monitoring.”

A 39-year-old Brooklyn, N.Y., woman told us she was very frustrated by her doctors’ response. The woman, who asked to be identified only by her first name, Emily, said she got sick first on March 13, and when she went to the emergency room, “doctors were telling me I was crazy.”

“I would go to the ER and they would prescribe me valium,” she said. She continues to experience symptoms in August, when we spoke with her in a phone interview. “My primary care doc said, ‘I don’t know what to do or how to treat you,'” she said. She has seen a range of specialists — a cardiologist, pulmonologist, neurologist and endocrinologist.

Here are the voices of some of the members of the support group on Facebook, from late August:

“I first tested positive April 8th and continue having symptoms and developing new symptoms. Does anyone else feel like family and friends don’t really believe you’re still experiencing these?”

“I first got sick in March and have been unwell ever since … I was never hospitalized, but am still dealing with crushing fatigue, chest pains and myocarditis, and those dang headaches that Will. Not. go away, along with dozens of other stuff that is less frightening or comes and goes. I’m so sorry that a community like this has to exist, but also so grateful not to be alone.”

“I was told to stay home as long as I could and as long as I could get 1 breath in every 60 seconds and I couldn’t get a test because I didn’t meet the requirements but it sounded like I had COVID. I thought I might die at home but I made it and I feel so incredibly grateful for that. Countless others did not and continue to not and it breaks my heart and sometimes I feel guilty that I survived when others did not.

“I am physically exhausted and emotionally drained. I am generally an optimist but I am finding myself become more pessimistic with each day. Watching people close to me (not physically I do not leave my house) act carelessly and it is enraging and disappointing.”

“I actually stopped getting on social media (this group is the ONLY exception right now) because I have so many friends who still argue that Covid19 isn’t real. I’ve told them what’s happening to me and they throw the negative test results in my face, despite what my own doctor says.”

“Basic things, like taking my daughter to therapies, eating dinner at home with family, picking up toys… I can’t. It leads to what I’m experiencing tonight. I’m mind boggled a virus can cause all of this. I’m used to getting up at 6am and going until 10 or 11pm. Sometimes later if I want ME time. I could function on no sleep if needed; wasn’t pretty, but I could do it. Now… I can’t function. It’s depressing. Honestly, it’s a devestating feeling. I just want to get better. I’m so sick and tired, of being sick and tired. 😭”

“I have gone through countless test for my post symptoms but no answers. I have to wait until November to receive my next set of tests and I just don’t understand how I am supposed to keep going like I am until then. My heart rate is out of control, I can barely keep food down most days, I cannot remember what I am doing one minute to another, my hair is falling out, I’m so tired all the time and a laundry list of other symptoms.”

“I know that not being able to taste in the big scheme is not the worst thing ever but it is breaking my heart. My career has been based on my palette for the past 10 years and hearing my doctor say he doesn’t know when or if i’ll be able to taste again just adds to my pessimism.” 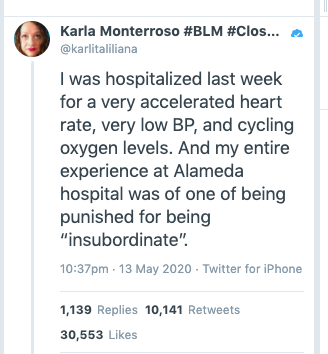 “OK – Anyone else struggling with absolute rage with how people treat this disease? I asked an innocent question in a local food/drink group about what restaurants are being safe. I got pummeled about how “stupid” I was being. Well, needless to say, they hit a nerve and I lashed out. I described what I was going through post covid and was still ridiculed. I ended it with an F* you and I was told that was uncalled for. Um, what’s uncalled for is the blatant disregard for human life. Seriously, I just want to quit.”

Here’s a Twitter thread from the San Francisco CEO talking about her hospital experience with Covid. “I was hospitalized last week for a very accelerated heart rate, very low BP, and cycling oxygen levels. And my entire experience at Alameda hospital was of one of being punished for being ‘insubordinate,’” wrote Karla Monterrosa.

Here’s a Twitter thread from a Boston woman talking about her experiences and trying to get treatment for her symptoms. 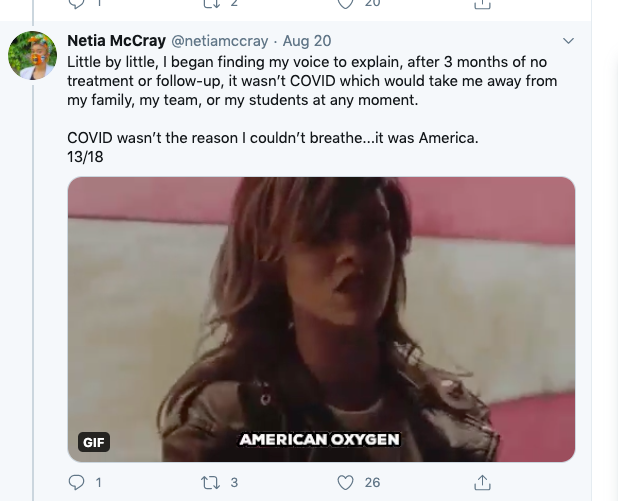