Coronavirus (Covid-19) and young adults: Yes, indeed, they are in danger 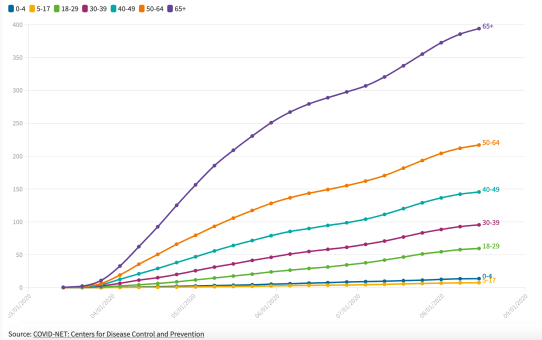 By BEN GLICKMAN and PHOEBE PINDER

When Covid-19 reached American shores in March, Rachel Robles, 26, was a little nervous, but not panicked. After all, early data from other countries indicated that young people had an easier time with the virus.

“I can’t control everything and I might get it,” Robles said about her early thought process in a video interview. “I said, ‘I’m going to just do my best, and my best is going to have to be good enough.’”

Robles, a data strategist from New York, is not certain when she first contracted Covid-19 — she thought that some of her early symptoms might be seasonal allergies. But when the intense symptoms started, she knew what she was dealing with.

“It felt like my lungs were on fire,” Robles said. She developed a heavy cough, fever, aches and nausea. For two months, Robles battled these symptoms and more. Then, she developed new symptoms — reflux, dysautonomia and fatigue — in June and July. Robles is a Covid-19 “long hauler” — a coronavirus patient who has had symptoms for an extended period of time.

Young people with coronavirus have largely been treated as safer than their older counterparts — young people have significantly lower mortality and hospitalization rates. But a minority of young people experience intense illness, and the group is growing.

(The C.D.C does not publicly display mortality rates by age group, only the lump sums of deaths from Covid-19 per week, available here. There are significantly more deaths for the 65 and older group, but the data does not show how mortality rates have changed over time for different age groups.)

Researchers aren’t completely sure why certain young people are becoming so ill from Covid-19. Because the disease is so new, there isn’t much data to explain this alarming phenomenon. Researchers can only theorize as to what factors might be responsible.

In early April, a group of researchers at The University of California at San Francisco noticed that, despite having fewer health problems in general than older age groups, young adults were displaying higher than expected rates of acquiring Covid and, when infected, were more likely than expected to become severely ill.

The U.C.S.F. researchers examined the C.D.C. website’s list of factors thought to increase susceptibility to Covid infection and severe illness — primarily chronic illnesses common in older age groups, such as heart disease and diabetes, as well as several factors prevalent in all age groups, including asthma, diabetes and smoking.

Using data from the National Health Interview Survey collected between 2016 and 2018, the researchers determined that 32% of people between the ages of 18 and 25 displayed at least one of these factors, identified by the C.D.C. as making them vulnerable to Covid infection and severe illness.

The researchers zeroed in on smoking — a common habit in young adults — as a particular factor increasing medical vulnerability amongst people ages 18 to 25. “We found that the vulnerability rate is cut in half for young adults if they’re not smoking or vaping,” said Dr. Sally Adams, one of the U.C.S.F. researchers, in a phone interview with ClearHealthCosts. “You may be vulnerable to a more serious Covid infection if you smoke or vape, so it would be in your best interest, if you do those activities now, to stop or to at least cut back.”

This isn’t to say that smoking is solely responsible for high numbers of cases of severe Covid infection in young adults, but it can perhaps be taken into account as a contributing factor.

There are other behavioral factors specific to the young adult age group that may be making them vulnerable to severe cases of Covid. In an interview with ClearHealthCosts, Dr. Adams emphasized the importance of focusing on the age group of 18 to 25 in particular to find answers, rather than the broad range of 18 to 44 that many existing studies classify as “young adults.”

For example, she said, far fewer young adults attend regular preventive care visits than child, adolescent, or older age groups, and they may be missing important opportunities to learn about what could put them at risk. Young adults and adolescents also process risk differently than other age groups, and may put themselves in danger by not properly adhering to Covid safety guidelines.

With some colleges just now beginning to bring students back to campus, reports of large social gatherings have already emerged from college campuses in Georgia, Alabama and Oklahoma, with few students wearing masks or practicing social distancing.

“There’s a lot of work in the field and especially in the past about adolescent and young adult attitudes towards risk,”  Dr. Adams said, “but I don’t know of any real work that’s shown anything about perceptions of risk for Covid in the adolescent or the young adult population…or what this age group thinks they should do to protect themselves, or what they think would happen if they got it. Those are all great questions. And I don’t I don’t know that there are answers out there.”

Robles said her most challenging symptom was difficulty breathing. In her first few weeks of illness, she considered calling an ambulance, but opted against it because of the slow response times. “It was really scary not having that security,” Robles said.

Robles has had mild seasonal asthma since childhood and had a heart arrhythmia that was recently treated by surgery — two risk factors for severe illness. But her conditions have never caused trouble — she ran a half marathon last year — so she assumed she didn’t have too much to worry about.

“Those assumptions are false,” Robles said. “Because Covid will find any little thing that you’ve ever had a problem with in your life, and it will exacerbate it.”

While Robles has battled coronavirus, she’s seen her peers on social media disregarding social distancing. “It’s frustrating because I want them to see the problem and that it’s not a far-off issue for them,” she said. “They could be dealing with this at any point.”

Stories of young long-haulers are not hard to come by. CNN reported one 29-year-old suffered a partially collapsed lung because of his fight with Covid-19 — he also had a dramatic flare-up of symptoms two months after initial infection.

Christina Cortez, 26, of Oakland, Md., who has asthma, has been suffering from a severe Covid infection for 8 weeks now, with little to no relief of her symptoms. “My coughing still persists,” she told ClearHealthCosts in an email. “My shortness of breath is still here, my fever comes and goes, headaches are like second nature, chest pain is like a constant friend, and [my] fatigue has no boundaries.”

Cortez’s symptoms began in mid-June with a 101-degree fever and cold-like symptoms. She experienced a week of stomach pain and frequent vomiting before testing positive for Covid in early July. Her second week of symptoms saw the development of an extremely severe cough, headaches, sinus congestion, and chest pains. By the fourth week, she felt breathless and fatigued, and would become lightheaded by simply walking to the end of her street. These symptoms have persisted, along with a periodically returning fever. Her chest pain hit an all-time high in early August and, by that time, she had no energy to leave her bed, other than to get food or use the bathroom.

Nothing Cortez’s doctors have given her has brought lasting relief, from nebulizer treatments, to prednisone and antibiotics. She has recently begun using a new inhalant medication called BREO Ellipta, which she says has made it feel easier to breathe, though it has done nothing to lessen her other symptoms, and her cough has returned in full force.

Cortez is unable to work and has yet to leave her house, unsure if she is still contagious and fearful of becoming sicker or spreading the illness to others. “[I feel like] a leper in biblical times,” she told ClearHealthCosts. “An outcast, that society can’t be around, lest they too get sick and end up worse than me.”

Some have lost their battles with Covid-19. Yasmin Pena, an 18-year-old high school student with lupus from Waterbury, Conn., died in April after a month-long struggle with the virus, The Hartford Courant reported.

NPR reported that a number of young healthcare workers have also died  after being exposed to infected people. For example, Dennis Bradt, 29, died of Covid-19 after being put on a ventilator. He was probably exposed at his workplace, an addiction rehabilitation center, NPR reported.

The COVKID project aims to present more accurate data around Covid-19 infections in young people. The project, comprised of a team of three epidemiologists, is housed within the Women’s Institute for Independent Social Enquiry, a public policy think tank. Although the group primarily focuses on children and teens, the age ranges in its Covid-19 data often goes up to 25 years old.

Dr. Janelle Menard, a medical anthropologist and epidemiologist with The COVKID Project, says that the current case numbers in young people are probably  drastic undercounts — a result of limited testing, mild cases of illness and a lack of standardization of data around certain age groups.

“If we don’t have good data, we don’t know how to address public health policy and make recommendations for patterns that we’re seeing in young people and children,” Menard told ClearHealthCosts in a video interview. Menard said surveillance allows researchers to identify trends within younger populations with Covid, specifically on risk factors for serious illness and potential long-term impacts.

Menard believes policy makers need to take the disease seriously in young people — but so do young people themselves. In recent months, the median age of infection has dropped, driven by a spike of infections in young people. These cases, according to Menard, are probably a result of more tests available for mild cases of the disease and general reckless behavior by younger populations.

Early in the pandemic, young people were infected at a lower rate — Menard theorizes that this was because schools had shut down and interactions amongst young people were limited. Now that more young people and children are being infected, Menard said, it is not entirely clear what the long-term impacts will be on their health.

Although young people apparently experience severe disease at much lower rates, Menard believes that we cannot disregard younger people with poor outcomes from coronavirus. “Even if that tiny percentage remains tiny — and I hope it does — that’s not insignificant,” she said. “Children are not expendable.”