Coronavirus (Covid-19) and the long haul: ‘For 7 weeks I have been through a roller coaster of ill health and utter exhaustion’ — The BMJ 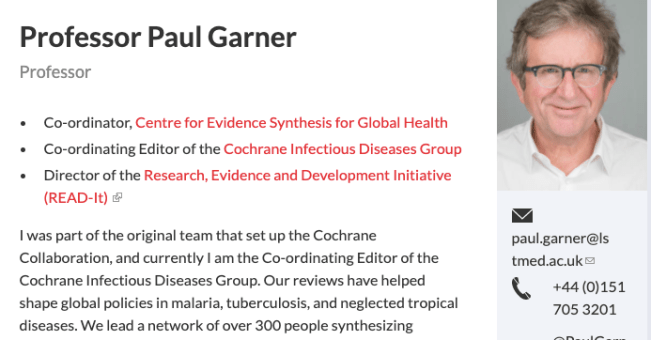 Editor’s note: Paul Garner, professor of infectious diseases at Liverpool School of Tropical Medicine, discusses his experience of having covid-19 for 7 weeks. This piece, posted May 5, 2020, was one of the first descriptions of “long covid.” As an internationally known academic, Garner brought early attention to the phenomenon.

“In mid March I developed covid-19,” Paul Garner writes at BMJ.com. Garner, a ” For almost seven weeks I have been through a roller coaster of ill health, extreme emotions, and utter exhaustion. Although not hospitalised, it has been frightening and long. The illness ebbs and flows, but never goes away. Health professionals, employers, partners, and people with the disease need to know that this illness can last for weeks, and the long tail is not some “post-viral fatigue syndrome” -— it is the disease. People who have a more protracted illness need help to understand and cope with the constantly shifting, bizarre symptoms, and their unpredictable course. Early March seems so far away. … I advised my 97 year old father to isolate. I said to myself that years of running and military fitness would protect me from harm. I discounted a runny nose, carefully checked my temperature every day, and examined the CDC/WHO comparison table and decided I did not have covid-19. Then one afternoon I started feeling strange: I happened to be on a zoom meeting with David Nabarro who said anyone who felt unwell should isolate instantly, on the spot. I went home early, and then the journey began. In the first days at home I wasn’t sure I had covid-19. Then I damaged my hands with bleach. It had no smell, I assumed it was old and inactive -— but it was just I could not smell the chlorine. The heaviness and malaise became worse, I had a tightness in the chest, and realised it could be nothing else. I was mortified that I might have infected the staff I had worked with for over 20 years…. My mind was a mess. My condition deteriorated. One afternoon I suddenly developed a tachycardia, tightness in the chest, and felt so unwell I thought I was dying. My mind became foggy. I tried to google fulminating myocarditis, but couldn’t navigate the screen properly. There was nothing to do. I thought, if this is it so be it. A few hours later I woke up, alive, and the tightness replaced by extreme fatigue. Every day, day after day. Sometimes I felt better and became optimistic; after all, the paralytic state had not recurred; but then the next day I felt as though someone had hit me around the head with a cricket bat. … The illness went on and on. …Every day there was a surprise, something new. A muggy head; acutely painful calf; upset stomach; tinnitus; pins and needles; aching all over; breathlessness; dizziness; arthritis in my hands; weird sensation in the skin with synthetic materials. … I started talking to others. I found a marathon runner who had tried 8 km in her second week, which caused her to collapse with rigors and sleep for 24 hours. I spoke to others experiencing weird symptoms, which were often discounted by those around them as anxiety, making them doubt themselves.The internet described recovery times of about two weeks for people that had not been hospitalised. I had not had severe disease, yet here I was after four weeks still unwell.” Paul Garner, “For 7 weeks I have been through a roller coaster of ill health, extreme emotions, and utter exhaustion,”< The BMJ.