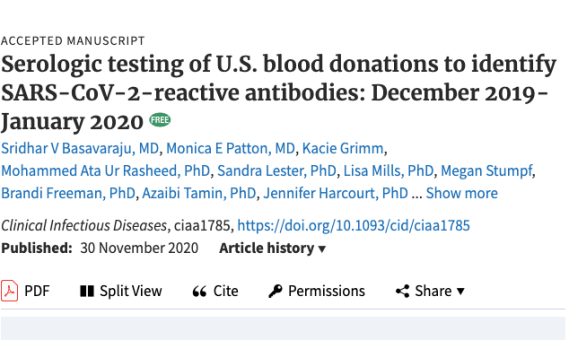 “Testing has found Covid-19 infections in the U.S. in December 2019, according to a study, providing further evidence indicating the coronavirus was spreading globally weeks before the first cases were reported in China,” Bloomberg News writes. “The study published Monday identified 106 infections from 7,389 blood samples collected from donors in nine U.S. states between Dec. 13 and Jan. 17. The samples, collected by the American Red Cross, were sent to the U.S. Centers for Disease Control and Prevention for testing to detect if there were antibodies against the virus. ‘The findings of this report suggest that SARS-CoV-2 infections may have been present in the U.S. in December 2019, earlier than previously recognized,’ the paper said. Reports of a mysterious pneumonia spreading in Wuhan, China, first emerged in late December 2019. After multiplying rapidly throughout the city in the following weeks, the disease spread across the globe, with the first U.S. case emerging on Jan. 19. The revelations in the paper by researchers from the C.D.C. reinforce the growing understanding that the coronavirus was silently circulating worldwide earlier than known, and could re-ignite debate over the origins of the pandemic.” The CDC study is here. “U.S. Covid Cases Found as Early as December 2019, Says Study,” Bloomberg.