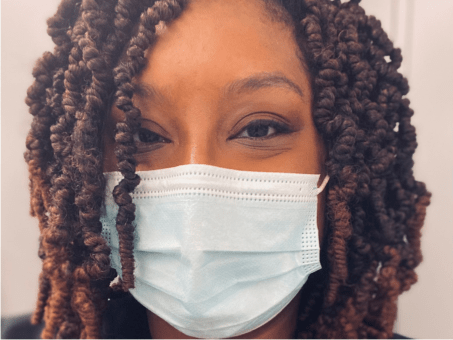 Dr. Brittani James works on Chicago’s South Side as a family doctor, and also serves as an assistant professor at the College of Medicine at the University of Illinois. She also runs with her twin sister, a psychiatrist, the Institute for Antiracism in Medicine. Dr. James sat down for a video interview with ClearHealthCosts in December, as providers began receiving the coronavirus vaccine, to talk about how the history of racism in medicine has shaped mistrust of the vaccine among Black Americans.

This interview has been edited and condensed for clarity.

Tell us about how you got into medicine and where you are now.

I didn’t see doctors growing up that look like me  – I didn’t see my first Black doctor until I was 21 in the flesh. I just did not have role models.

When I went into medicine, it was a huge culture shock.  I think in my year [at medical school], out of a class like 200, there was like, I think five [Black people]. I remember walking down the hallway, into the lecture hall, and they have all the class pictures, all white men, all the presidents, nobody’s looking like me.

Only 2 percent of doctors are Black women. When you’re a Black person in [medical] spaces – not only can we often not get in, it’s very hard to get promoted, recruited. So people making decisions are not me.

My patients are on the South Side – about 100% of my patients are black. [They see] gang violence. There was a shooting at my clinic two months ago – I’m in the hood. For me, this work is about humanizing them first, helping them see that somebody sees them, sees their humanity and then helping them navigate [the healthcare] system.

What have you seen since the start of the pandemic? What are your patients discussing now that the vaccine is available?

We know that Black death rate is nationally two or three times that of white people. Here’s Chicago, it’s six times. In the early days, when we were struggling to even get widespread testing, we didn’t have enough tests. [Chicago] got three or four testing centers in the downtown area, and we were still waiting for one on the South Side. When we talk about the kind of structural violence, we weren’t even measuring it.

What do you wish white people understood about Black vaccine skepticism?

I’ll start with this: if you think it just started with Tuskegee, you’re wrong. It’s very important to say the full name – the U.S. Public Health Service Study at Tuskegee. It’s a mouthful, but because even now, people will just call it Tuskegee, and when you erase the fact that it was actually run by the U.S. Public Health Service, you’re erasing the fact that this was not some fringe scientist. This was sanctioned by the US government. Even the conversation about Tuskegee is sanitized and washed down.

But the reality is, we have centuries of abuses. You cannot isolate a Black person’s hesitance to take the COVID vaccine and the mistrust of that from their mistrust of medicine, the health and health care system. Mainstream scientists and medical professionals were crucial to research like Tuskegee, and have continued their philosophies of biological black inferiority, or to this to this day.

Racism is baked into the system of medicine, the institution, the way we deliver care. The way that we teach our trainees, and even the way that we conduct our biomedical research….it’s infused, you can’t separate them.

Can you give us an example of that?

I would love a world that moves to understand when you talk about Black people having higher rates of diabetes, or high blood pressure, for example, the conversation is about the structures in our society that currently create that inequity. And that’s what I mean when I say medicine teaches you to be racist. What I’m actually saying is [medicine reinforces] this false belief that there is something biologically different about Black people that makes them uniquely prone to disease, which is not true.

We can’t fix things before naming them. This is another problem with doctors. We like to think we’re saviors. Just because we have good intentions, we’re still enacting violence toward black people. Even though we’re in a system that’s supposed to heal people, we have been very complicit and active in the oppression and destruction of Black and brown bodies. And we have to reckon with that.

How do you reconcile the history of experimentation on Black folks with the current anti-vaccine sentiment among primarily white-appearing communities – i.e. Trump supporters?

People love to dump all anti-vaxxers into one category. That’s problematic, because we’re not going to engage people in a real way. If you feel the need to say, you’re stupid, I’m better than you, if you were just smarter, you would be thinking the way I think – bad strategy. That is an approach that I’ve never seen be effective in my clinic.

I think the temptation is to kind of lump everyone together. But there’s definitely real nuance in the reasons why someone does not accept a vaccine.

Black people, they don’t want to get the flu shot, either. They will take every other one. But I think something about the fact that [the flu shot] comes out every year [makes] that one a particularly hard sell. So that’s why I knew [coronavirus] would be a hard sell.

This mistrust is probably the biggest driver. I hear things like – what did they put in it? Are you going to take it? I had someone say, I don’t want to turn into an X-Man, am I going to start glowing? It’s a different thing than what we hear from mainstream white people, which is more like, I don’t want to get autism, which can be a very privileged perspective.

From your perspective, how will the vaccine rollout go out?

I’ve gotta give [the medical community] credit for at least getting to the point where, when we’re talking about priorities, [we] realize, like, O.K., the death rates of Black communities are really bad, we should probably prioritize this group.

Medicine has not stopped to understand itself to be a racist institution, not in a fundamental way. You haven’t even named it, beginning to articulate and untangle ways it manifests in individuals…[doctors] just don’t understand how racism is everywhere in this place. And without understanding that anything this system puts out is going to have racism built in it by definition, you can’t correct for something you don’t see.

I would know that we were on the better track if we were amplifying different voices. We see hospital leadership, including mine, making decrees mostly from white men talking about what needs to be done in Black and brown communities. You don’t have anyone from the community. Get some people who live in this community to talk about it, interview them, sit down with them and understand their fears.

What can we do to diversify the medical profession?

The [medical school] entrance test – the MCAT that we took…costs a couple thousand dollars. You’re already privileging people with money. I think it’s like, 60% of physicians are upper class. So one, more support for paying for the test. But more so than that.

I’m an advocate of like, do we even need [the test]? It doesn’t actually predict how someone will do in medical school. All of our standardized tests do not correlate to what kind of doctor you’re going to be. It’s just another artificial barrier.

I used to run a pipeline program with my sister which was aimed at increasing diversity and medicine – we ran it for about two years. What we individually realized was trying to take Black and brown students and teach them how to say the right thing, how to smile right after an interview question, that’s really cutesy. It makes you feel like you’re doing something.

But I got rid of my own program, because it was racist. What we were doing was reifying, this idea that you as you are, is not enough is not an acceptable or palatable way to be a physician.

It’s not just recruitment and retention – we’re also losing students when they get to the other side. Once they get accepted, they’re walking into a racist, sexist wasteland of trauma. You can’t thrive in that kind of environment. So the culture of these institutions are suffocating and hurting students. We’ve got to also make environments where people can thrive and their Blackness and their brownness and the unique things that go along with that too.