Coronavirus (Covid-19) and the vaccine: Getting that second shot is turning out to be complicated for some people

The two coronavirus (Covid-19) vaccines that have been approved for use in the United States both require a first shot and then a second, booster shot, either 21 days later (Pfizer) or 28 days later (Moderna) for full effectiveness, according to the manufacturers.

Yet in the current vaccine shortage, some people who got the first one are struggling to get the second one.

A friend who is a New York teacher reported: “I celebrated Inauguration Day by getting my first vaccination shot. . . second shot should be in mid-February but, like everyone else who got their first shot today in the South Bronx, I’m on my own to make an appt. Vaccinations are running out and no one knows when the next allotment is coming.”

He wrote to me on Facebook that he made his first appointment through the New York City scheduling website on Jan. 11, the first day he could do it, and then went to “701 St Ann’s Ave (Mott Haven school) in S Bronx, I made it the first day that teachers were made eligible and got an appt quickly and without any problems. A day later, spots were almost impossible to schedule.” 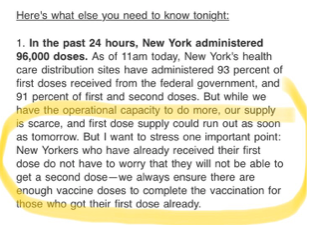 As he began his search for the second one, I sent him a number of a Bronx place I’d heard had vaccine. He said “No good: “you have to return to the place that did the first shot.”

The teacher wrote “I was told yesterday when I got my first shot that I should take the first appointment anywhere–and not wait for something to open up in the same place. But I imagine this is changing daily.”

Gov. Andrew Cuomo is promising that no one who had a first shot will lose out on the second shot (see screenshot from his email) but we imagine he is not doing the searching that our community members are. We’ll keep watching for updates.

Another New York woman scheduled her first appointment on Jan. 12 for Lincoln Hospital in the Bronx. It was supposed to be on Jan. 21, but they canceled it on Jan. 20.

A New York City professor wrote: “I got my first vaccination yesterday in Coney Island. And was able to schedule the second dose in Canarsie. But it took a lot of searching–and Canarsie was not my first choice.”

He said he signed up at https://vaccinepod.nyc.gov.

“I registered and made my appointment online. I understand I was lucky. By the time I left after getting my first dose, I already had an email about signing up for second dose. It took searching through a lot of different vaccination sites (you have to go site by site, rather than being taken to a site that has appointments for the range of dates). A couple I know (78, 80) have been trying to make an appointment by telephone with absolutely no luck.”

What if the second shot, the booster, is delayed?

I myself had the first dose Jan. 16 at Jacobi Medical Center in the Bronx. As they were processing my paperwork on intake, they scheduled the second one for Feb. 17, also at Jacobi. But with the recent reports by Mayor Bill de Blasio that the city is out of vaccine, I’m wondering what will transpire.

A lot of people are curious about what will happen in the United Kingdom, where second doses of the Pfizer vaccine have been delayed.

“There is ongoing debate about the UK government’s decision to delay the second dose of the Pfizer/BioNTech vaccine until 12 weeks after the first dose, instead of following the recommended dosing interval of 21 days,” The BMJ wrote on Jan. 20, cautioning that the outcome of such an experience is uncertain.  “Our recent BMJ opinion piece questioned the wisdom of the delay. [2] Sheila Bird, co-author of this piece, former programme leader at the Medical Research Council Biostatistics Unit at the University of Cambridge, and a member of the Royal Statistical Society’s covid-19 taskforce, has called for the UK’s policy decision to be evaluated using tilted randomization to assign one quarter of people to receive their second dose at 21 days after the first. Bird has written to Matt Hancock, secretary of state for health and social care, asking him to investigate the effects of extending the gap between doses.”

New York might see similar effects. “Thousands of New Yorkers have had their COVID-19 vaccine appointments rescheduled this week, as Mayor Bill de Blasio revealed that a shipment of the Moderna shot has been delayed, further imperiling the city’s goal of administering 1 million shots by the end of January,” Gothamist reported on Jan. 20.

“At his news briefing, de Blasio could not fully explain what caused the holdup, in which 103,400 shots—54,200 first doses and 49,200 second doses—were expected on Tuesday.

“‘We’ve had to tell 23,000 New Yorkers who had an appointment this week that they will not be able to get that appointment for lack of supply,’ de Blasio said, adding that the delayed appointments were for those scheduled to receive their first doses.”

“Hey Jeanne. I’m a pediatric nurse practitioner at Montefiore Children’s Hospital and just received my 2nd vaccine (Pfizer) on Saturday & no side effects, besides the muscle arm soreness (kinda like when u get tetanus shot) for 2 days. My 2 SIL’s also nurses and received 2nd shot 4 days b4 me & one had headache and back pain for 1 day, felt fatigued; the other no side effects.”

A New York hospital worker wrote: “I work at NewYork-Presbyterian and I do shifts at the Armory – our public vaccination center. After receiving the first dose, we schedule everyone for the second dose while they are still onsite. … Nobody leaves without a second dose appt”

She added: “the [Fort Washington] armory site (at 168th) opened on Jan 14th and has already done 10,000 vaccines. I know that’s not really what you are asking about, but it feels exciting, so thought I’d share. It’s a really cool setup with about 70 vaccinators.”

Here’s the New York Presbyterian release on the site.

The signup for nonpatients is through MyConnect — here’s a link to go in without an activation code. I did have one  friend who signed up and got a shot there — a Pfizer shot, on Jan. 21. But when I went there, in the late morning on Jan. 22, they had one appointment 5 minutes from the time I signed in, and no others.