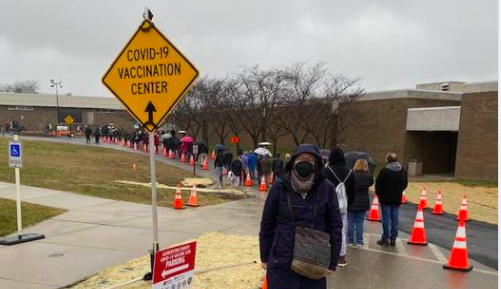 We’ve been following the Covid vaccine distribution in the New York area, trying to reflect people’s experiences on the ground. Here are some suggestions and observations from my acquaintances and friends on social media.

“If you have a parent that is 75 or over go to the Stamford Hospital Website and register for a Vaccine through CT. I got my parents an appointment on Friday and they were vaccinated today,” one local woman wrote on Facebook on Jan. 22. “Once you register through the system they send an email and you can book the appointment. Incredibly well run and easy to get elderly in and out. Click on the Vaccine Administration Management System Link about 1/2 way down the page.”

Here in Westchester County, just north of New York City, we’re very close to Connecticut. My house in Pelham, N.Y., is just 14 miles from Greenwich, Conn., and many New York towns are much closer.

Here’s the link she supplied. I’m not 75, so I was not able to go through the entire system, but it did accept my New York zip code.

A few days later, my neighborhood Facebook group was reporting that only Connecticut residents were able to apply through the Vaccine Administration Management System site for Connecticut. Some New York residents who had made appointments were told not to come.

One woman wrote: “My father had an appointment for tomorrow in Greenwich, he lives less than 5 miles away in Port Chester but they called him to cancel last night because he’s not a CT resident.”

By Wednesday, only Connecticut zip codes were accepted.

The Westchester County, N.Y., authorities have set up a signup form that lets county residents claim eligibility for the vaccine and then put their contact information on a form. The form promises that when vaccines are available, signees will be notified. I put my name on it on Jan. 25; let’s see what happens. More information here.

A New York City site that was set up in Washington Heights by New York-Presbyterian and Weil Cornell seems to be serving mostly people from outside of the largely Hispanic neighborhood, according to an article by The City.

The City reporter shadowed a neighborhood resident, Olga, as she went to the Armory and tried to make an appointment, but was turned away because she did not come with an appointment, while mostly white suburbanites stood in line, with confirmed appointments made online, and then got their shots.

“By and large, one would hardly know that Washington Heights is home to Little Dominican Republic or that 69% of its residents are Hispanic based on the people who poured into the Fort Washington Armory Tuesday and walked out with ‘I’ve been vaccinated’ stickers,” the article noted.

“At the door, most people entering appeared to be white and unfamiliar with the neighborhood. Some asked security guards where they could find parking. Nylon Longchamp handbags and Burberry scarves stood out.

“Outside of the site, run by NewYork-Presbyterian Hospital near its Washington Heights medical center complex, Olga encountered another language barrier: None of the handful of guides and security guards outside directing people spoke Spanish.”

“The Armory vaccination site is open to eligible patients, currently those over 65, as long as they have an appointment, according to New York-Presbyterian’s website,” the article says. “(To schedule an appointment, eligible individuals have to register online by creating an account with Presbyterian, o aquí en Español, or call 646-697-VACC, which has an option for Spanish.)”

A group of volunteers put together a separate New York vaccine-finder at nycvaccinelist.com. I have no idea how good it is, but it’s clearly a reflection of the confusion: The New York City and New York State sites are patchy and confusing; they don’t include all sites, and update irregularly.

Here’s the site. They are signing up volunteers.

There’s not much information about who they are; the site does say: “This site was put together by volunteers using our best efforts to assemble readily available data from public sources. This site does not provide medical advice, nor does it provide any type of technical advice. nycvaccinelist.com is not responsible for any errors or omissions. nycvaccinelist.com provides this information on an “as is” basis, with no representations or warranties of any kind, express or implied, including with respect to accuracy, completeness, quality, non-infringement, merchantability or fitness for a particular purpose. nycvaccinelist.com will not be liable for any damages of any kind arising from the use of, or reliance on, any information made available on this site.”

Here they are on Twitter. They seem to be crawling a number of sites. The people behind it, according to the site:   Cameron, Dan, Jason, Michael, Philipp.

In the Princeton, N.J., area

“First shot. Pfizer vaccine. Rowan College Mega-Site in Gloucester Co, NJ. While it took several tries to get an appointment, once you’re at the site & in line it goes fast. US Army helping to keep everything running smoothly. Great experience all around. (You can’t tell, but under my mask I’m grinning ear to ear.)”

I asked for details, and she added:

“Wasn’t all that cold. Tops 5 minutes before the line started moving & we were inside. There were about 30 inoculation stations set up. I was in and out in 45 minutes (30 of those spent in observation after the shot).  … Impressive.”

“Register at NJ site& RWJB site. I registered about 12 days ago. Received email last week telling me I could go ahead & schedule an appointment. I spent about an hour (constantly refreshing my page) to schedule an appointment. Set your radius @ 100 miles. Gloucester County Mega Site is about an hour & 40 minutes away (door to door & with moderate traffic). Good luck!”

I asked for more detail, and she added:

“While the NJ State Covid website can be vexing, the actual Mega Site (at least in Gloucester County, was great. There’s a glitch with scheduling the 2nd dose which is supposed to be resolved by this Friday. The site was predominantly staffed by the US Army (they do know how to get folks moving in a timely and orderly fashion!).”

A woman from the mid-Hudson Valley wrote on Facebook about her experiences:

“Online they were a nightmare, while the actual receiving of the shot was smooth sailing. The experiences were night and day. So, in trying to book an appointment for myself and later for my parents, The process was confusing, there were no instructions or an overview of the whole process. The website was constantly changing, so each day that I logged in, I had to figure out how to do it all over again. The website would also crash. It didn’t always work on a mobile phone or iPad. Eventually, I got an appointment for my first shot and received in on Jan 13.

“For my parents, it’s been a whole other can of worms.

“The online sign up process is inefficient as cumbersome as each and every time you look for an appointment, you have to re-enter a huge amount of information – again just to look for the appointment. Then to actually sign up for the appointment, you must re-enter MORE information, as well as the same that you needed to to search the database. So, if you are trying to book appointments for near to each other, say for two elderly people who live together, you are hard-pressed to do that.

“I ended up going to a location less than 2 miles from my house. I was lucky. The POD was incredibly well-organized. I was in and out during my assigned block of time. My mother and her BF got an appointment for mid-feb, but they are in their 70s and have to drive 4 hours to Potsdam, NY to get it. Otherwise, the earliest appt near them is in late-March. The system to sign up is ridiculously unorganized and does not account for people who may not be able to travel on their own or have access to the internet. NYS Health Dept has mad a lot of assumptions about the people who need to sign up. 🙁

“So, here I see a lot of issues with inequality that should be addressed by the state. I’ve heard from several folx that you cannot reach anyone on the phone either. You can leave a message and eventually you get called back.

There is still a great deal of confusion about whether and how some people can access the second dose of vaccine.

We wrote earlier about New York residents who had their first shot, and then were told it’s up to them to find the second — in the chaos that is the current distribution system.

Gov. Andrew Cuomo has pledged that people who had the first shot will definitely be able to get the second — as this Jan. 21 email from Cuomo pledges. Yet we are hearing from people who are saying they are still searching, and are increasingly concerned as their deadline nears.

In some states, retail pharmacies like Walgreens are able to give vaccines. Because of the jumbled nature of the state-by-state regulations, it’s not clear at a glance where this is possible.

This is a state-by-state listing of the regulations posted on a Walgreens site.