Coronavirus (Covid-19) and the superspreader event: He started a Covid-19 vaccine company. Then he hosted an event that infected many people. 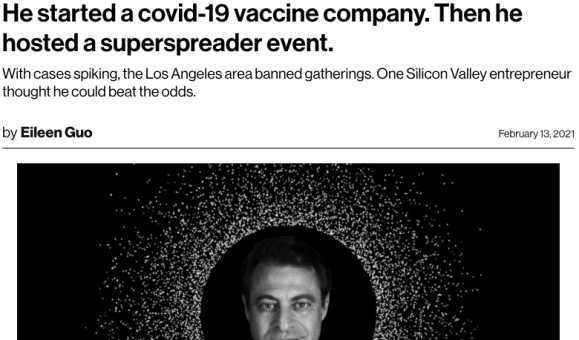 “At least 20 people contracted covid-19 at an indoor, mostly unmasked gathering for wealthy executives hosted by Peter Diamandis, the Singularity University and XPrize Foundation cofounder,” Eileen Guo writes over at MIT Technology Review. “At the time, a regional stay-at-home order made the gathering illegal. The outbreak wasn’t reported to authorities as required and rules on health data privacy may have been broken. Diamandis is not sure how many people have tested positive, citing either 21 or 24 cases, not counting secondary infections. On Sunday, January 24, with Southern California’s intensive-care units (ICUs) at full capacity, a shuttle bus made the short trip from a beachfront hotel in Santa Monica to an open-plan office in Culver City, carrying business executives from as far away as Israel, Hawaii, and Vancouver. Some had paid upwards of $30,000 to attend a pandemic-year rarity: an indoor, in-person, mostly unmasked business conference, called the Abundance 360 Summit. Created by Peter Diamandis — who is also the founder or cofounder of several space companies and Silicon Valley innovation hub Singularity University, as well as of covid-19 vaccine developer Covaxx — the conference was a lucrative opportunity to hold court with a group of his ‘patrons.’ These are businessmen (and a small handful of businesswomen) who pay large annual and conference fees for the privilege of gathering to talk about some of Diamandis’s favorite topics: AI, longevity, exponential growth, and ‘the abundance mindset.’ Speakers at the 2021 event, some of whom appeared virtually, included Silicon Valley luminaries such as Salesforce CEO Marc Benioff and Jonathan Hofeller, the executive in charge of SpaceX’s satellite mega-constellation, Starlink.A360, as its organizers call it, was being held despite widespread recommendations  from public health experts to limit contact with non-family members, wear masks, and hold any gatherings outdoors to limit the spread of covid-19. And in California, this was more than a recommendation: on December 5, the state had banned all gatherings, public and private, until regional hospital ICU capacities rose above 15% again. The in-person portion of Diamandis’s gathering was illegal. And at first, it seemed they were in the clear — even though staff and attendees were mostly unmasked. Everyone took daily coronavirus tests. Nobody fell sick during the January 24-26 meetings. But covid-19 can take time to incubate. The first confirmed positive results came back on January 28, during the conference’s online-only virtual-reality day, after most participants had flown home. Over the next few days, the number of positive tests climbed sharply. By the morning of February 3 at least five A360 employees, two speakers, and one family member who wasn’t at the conference had tested positive, while an additional three people showed symptoms, according to internal communications I viewed.  (I granted anonymity to sources, who expressed fears of retaliation for speaking out.) By the end of the day, that number would more than double. Another family member tested positive. Then, during a team Zoom meeting, Will Weisman, A360’s executive director, said that a large number of patrons had tested positive, including one who infected his wife and child, recounted an individual close to Diamandis on the call.” Eileen Guo, “He started a covid-19 vaccine company. Then he hosted a superspreader event,” MIT Technology Review.