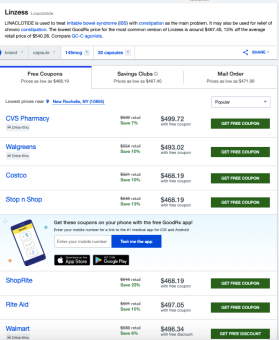 A woman we know had a problem: Her doctor prescribed Linzess for constipation. But her insurance, the New York State version of Medicaid, wouldn’t cover it. So she would need to have $600 to get the medication, paying cash, or skip it.

She had tried several other over-the-counter and lower-cost medications to resolve this problem. None of them really worked. So when her doctor said this would be the miracle she was looking for, she said “yes!” That is, until her insurance company said “no!”

The doctor made the prescription. He sent it to her pharmacy. The pharmacy told her on the phone that Healthfirst had rejected the claim, and she would need to pay cash — around $600.

Insurance companies reject prescriptions frequently, for various reasons. Often they say that the medication is experimental, or that the patient needs to try less expensive drugs first. The insurers represent themselves in this role as protecting patients from bad decisions by their doctors, and from spending money frivolously on drugs that aren’t going to work. Some people think the insurers just say “no” to see how determined patients are.

Drug companies say that insurers are playing fast and loose with the rules on medications, and that their life-saving drugs are being denied by insurers.

Doctors wonder why they got a medical degree if the insurer is going to overrule their decisions, keeping patients from getting well.

Either way, the patient is in the middle

We have written before about how to turn an insurance company’s “no” into a “yes.” We have also written about how other patients confronted this problem, for example here with Dupixent and here with Nucala, among others. And we have a handbook on how to save money on prescriptions; find it here.

So she followed our suggestions — ask for a generic, ask for a cash price, use drug company assistance, appeal the decision, appeal again. Don’t take “no” for an answer — the insurance company is not a doctor. 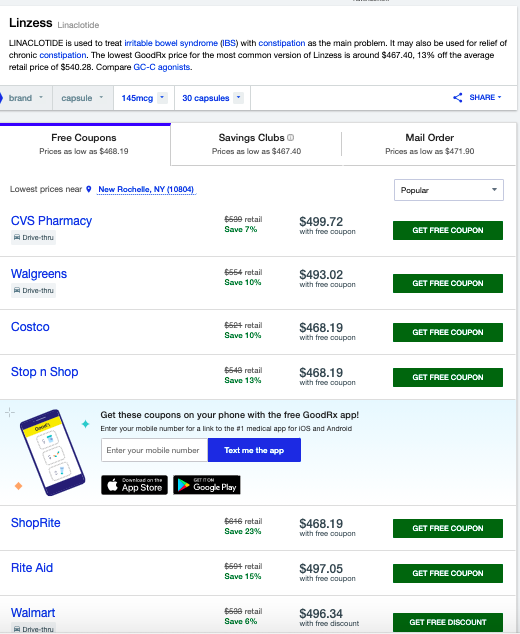 This particular medication does not have a generic.

She wasn’t sure why she should ask for a cash price. After all, isn’t your insurance supposed to give you access to the lowest price for medications? The short answer is no: We have often heard of people who put away their insurance card and pay cash for medications, and get a lower price.

She looked up the cash prices on GoodRX.com, where you can plug in the name of the medication and do a Zip code radius search of sellers in your area for that medication. The lowest price was $468.19 at Costco, Stop N Shop and ShopRite  in her neighborhood — which is not a huge discount but certainly better than $600.

GoodRX said you needed to get a free coupon to get this price; we have heard reports that certain pharmacies won’t accept the GoodRX coupons. We don’t have solid reporting on that, but we have heard anecdotally that these coupons are not always useful.

(Incidentally, at most Costco locations, drug prices seem to be relatively low, according to our earlier research. At most Costcos, you don’t have to be a member to use the pharmacy, though members will get even lower prices. See our “guide to saving money on prescriptions.”)

She knew about patient assistance programs — the programs set up by drug companies to make it possible for patients in these situations to get the medications that are prescribed for them even if the insurance company says no. The patient (or PERSON, as we like to say) fills out a form and if she’s eligible, she pays a minimal out of pocket. Here’s the one for Linzess, from the manufacture, AbbVie. It promises “you could pay as little as $30 for 90 or 30 days of Linzess.” Confusing wording, but there you have it.

The way it works: If you qualify, you get the low co-pay and your insurance company pays full freight. It’s a way for the drug companies to keep selling their medications. The sums they spend on this are used as a writeoff on their taxes. Win-win for the drug companies and for the patients! Except that the insurance companies keep paying, and the premiums keep going up. (We have written about them before, here and here.) The patient eventually pays somehow — either in increased taxes to set off the pharma tax writeoff, or in increased insurance premiums, or some other way.

These tend not to be a blank check — often it’s for a set amount in a calendar year, or for part of a year, or it requires a renewal at certain intervals.

This Linzess one, like many others, rules out patients insured by Medicare, Medicaid, Trinet (the military insurance plan) and other recipients of taxpayer-supported insurance.

So she didn’t qualify.

She filled out the application, and was told that she would be considered. But the decision would not come until at least 4 weeks from the date of the prescription. Here’s the patient assistance program she looked at, and here are some others.

At the first rejection, the pharmacy told her that if the doctor filled out an appeal, perhaps the insurance company would relent. He did the appeal, and it was not successful: The insurer still rejected the claim.

She called the doctor and explained. One of his assistants took it as her personal mission to talk to the insurer and explain to them that they were wrong.

It took about a day for this assistant to make the case to the insurer that the medication was needed, and the claim was approved. She picked up the medication under her New York HealthFirst insurance with the co-pay price of $3.