How much does Truvada cost? Or, when your PEO insurance goes sideways 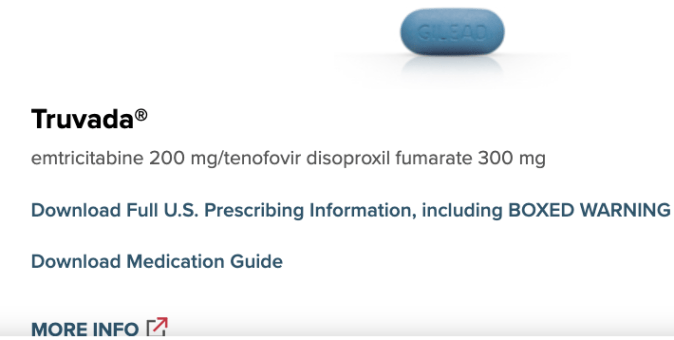 The man on the phone said his insurance company quintupled his premiums for next year, from $333 to $1,700, and he was really upset.

He was even more upset that the only thing that had changed in his health care situation was that he had started taking Truvada, the anti-HIV drug.

Truvada, also known as PReP, for pre-exposure prophylaxis, is intended to prevent HIV in people who are not infected but are at risk of infection. The medication is 92 to 99 percent effective. People who are sexually active and exposed to people with HIV use PReP — and ideally, condoms too — to prevent infection. Truvada can also be part of a course of treatment for people with HIV, but it is more frequently used in the prophylactic sense.

He spoke to me on the condition that I would identify him as a New York area real estate professional, age 42, because he is not public about his sexuality.

His insurer is a Professional Employer Organization (P.E.O.). I’m not naming them because I’m not naming him, and that seems to be fair. But if you’re interested in knowing who his insurer is, it’s probably not that hard to find out — very few P.E.O.’s will insure a single person who is in a limited liability corporation business structure, as he is.

He found me several years ago because I wrote about the P.E.O. option as a way to potentially save money. He had been insured on the New York State of Health, the Affordable Care Act exchange in New York State, and also by buying insurance directly from an insurer — but he was looking for a less expensive plan. He tripped across the P.E.O. option, and signed up. In that article, for Forbes, I wrote: “These P.E.O.’s — TriNet, JustWorks and Insperity are among the names you may have heard — can be an alternative for self-employed individuals, entrepreneurs and small businesses. What they do: Set up payroll, taxes, compliance, benefits and other employee management tasks, freeing the business from doing all of that in-house.

Most P.E.O.’s require two or more employees. The one our real estate professional uses accepted only one employee, he said, though they may have changed their policies and continued to insure him because he was grandfathered in.

He did his research. The exchange plan and the direct-from-the-insurance-company plans he had until about three years ago had a premium around $900, he said. The P.E.O. plan offered a better network and a total monthly cost of around $500, including his insurance premium and the fee to be part of the P.E.O. network. He renewed the next year, with a premium increase of about $30, he said.

Then, in December 2020, he said, he got a call telling him that his premiums would be $1,700 upon renewal. “I went to the doctor maybe three times for routine stuff like a strep test on a few medications,” he said. “The only thing that changed between last year and this year, is I went on a sexual health medication called Truvada.”

He sent me a voicemail and an email in late January detailing his situation, and we had a chat.

His suspicion is that he is being discriminated against because he filled a prescription for Truvada in November 2019. His insurance policy renewed uneventfully April 1, 2020, but his 2021 renewal held the unpleasant rate surprise. He appealed to the company several times to have the premium increase removed, but had no success.

“I am HIV negative, but I am sexually active,” he said. “I had been putting it off for a long time, because I really didn’t want to have the conversation with my doctor. I finally bit the bullet, and I had the conversation with the doctor, and I did it. I know that the medicine is quite expensive, but it also went generic sometime over the past year. That’s the only thing that changed. So when they told me that it is jumping 300%, I told her I want a full throated explanation for why? Because that was the first thing that jumped into my head is that I’m being discriminated against, either because they think that I have HIV or am at high risk for HIV, which strikes me as on its face illegal.”

In response to his request for an explanation, he said, he got “word salad,” so he insisted on a clearer explanation. None was forthcoming. He called back, and the representative said they had done “a thorough review of your account prior to determining the rate increase. The medical rate for the upcoming benefits year is priced appropriately. We cannot reduce that rate. Any rate increases are not solely dependent on claims data rate increases year over year, but are based on a variety of factors, including but not limited to the overall risk of client, state and federal requirements, plan design changes and insurance carrier increases — which again, is a word salad, devoid of meaning.”

Because Truvada can be used both to prevent HIV and as part of a course of treatment for HIV, he said, he wonders if the insurer thinks he has HIV and is thus discriminating against him.

I told him about a friend who had P.E.O. insurance, and who had a similar experience: After a couple of years, her premiums tripled. She was told this happened because her husband has lupus and thus was an expensive patient to insure.

Another thing I explained to him: The P.E.O. marketplace is regulated differently from the Affordable Care Act marketplace. The P.E.O. can indeed penalize someone for a pre-existing condition by raising rates and thereby driving a person away. The A.C.A. plans cannot. This was one of the driving forces behind the A.C.A.: Discrimination against people because of pre-existing conditions meant that many people who had survived cancer, or had other illnesses, were essentially uninsurable.

In other words, a P.E.O. can make a more expensive insured person pay higher rates; the A.C.A. plans cannot.

Tim Hillert of BenXchange,  which has dealt in P.E.O. insurance, said that the P.E.O. can indeed raise rates. This kind of insurance falls under “large-group” rules, he said, for insuring a group of more than 100 people. The insurer that sells the P.E.O. insurance can examine the health records of insured people and adjust rates up from year to year, he said. “Over 100 employees, any group of employees needs to be medically underwritten,” he said. “In the first year, you might get an awesome deal from a P.E.O., because they kind of have some control over that. Then, when the renewal comes in, the insurance carrier reviews the entire book — all the clients — and they’ll go back through and they say, ‘Whoa, this is where this person actually is through price.’ So the insurance carrier comes back and says this is where this needs to be priced to manage the claims correctly.”

Louise Norris, a health care journalist, writes on Verywell Health: “Under the Affordable Care Act, for health plans purchased in the individual and small group markets, there’s no longer any flexibility for insurers to adjust rates based on an applicant’s medical history or gender. Rates in those markets can only vary based on age, geographical area (i.e., your zip code), and tobacco use (11 states and the District of Columbia have taken this a step further, and banned or further restricted tobacco surcharges on health insurance plans and some insurance companies have opted to not impose tobacco surcharges, even in states where they’re allowed to do so).

“So today, an applicant who’s in the middle of cancer treatment will pay the same price as another applicant who’s perfectly healthy, as long as they select the same plan, live in the same area, are both the same age, and have the same tobacco status. ” So if he had an A.C.A. plan, that rate increase would not have happened.

This would not be the first instance of insurance companies treating people who take Truvada differently.

“On Jan. 8, in response to allegations of discrimination by the Massachusetts attorney general’s office, Mutual of Omaha insurance company agreed that it will no longer deny life, disability, accident or health insurance, including long-term care insurance, to an individual solely because the individual takes the prescription drug Truvada,” Carah Wertheimer wrote for MedTruth in 2019. “Eighty percent of Truvada users are gay men, according to the New York Times.”

The New York real estate professional also mentioned that Truvada had become a generic in October 2020, which should theoretically reduce the price. Brand-name Truvada typically sells for $1,600 to $1,800 a month, according to Poz magazine, an HIV/AIDS advocacy, lifestyle, treatment and information resource.

“A new generic version of Truvada from Teva Pharmaceuticals hit the market this week, but at a price of about $1,455 a month, it undercuts the cost of the brand-name product from Gilead Sciences by only a couple of hundred dollars,” Poz reported last October.

One other point: He noted that the Trump administration had passed a law saying that insurers cannot charge people a co-pay for Truvada. Starting in January 2021, insurers must cover the cost of at least one drug in that category — Truvada, or its generic, or Descovy — as part of its plan. There’s more detail in this story from Kaiser Health News.