Coronavirus (Covid-19) and the vaccines: How people are making ‘backdoor’ shots happen 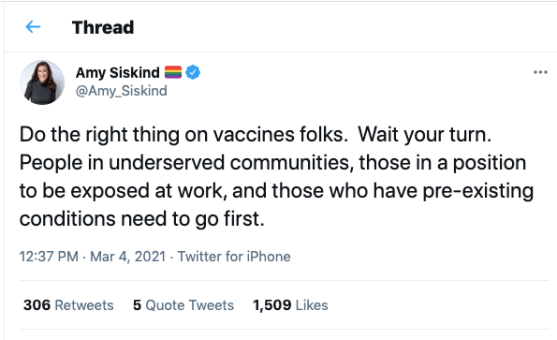 As the vaccine rollout continues its chaotic march across the United States, some people are getting a vaccine even though they don’t qualify. Some people are going to incredible lengths — forged paperwork and false claims. There was even a story about a $2,000 offer for a vaccine.

We’re going to talk here about people who are trying to jump the queue with what we think of as sort of shady practices. We do know that there are legitimate ways for people to jump the queue: For example, getting “leftovers” at the end of the day at a vaccine site, which is perfectly legit — New York State even has “leftovers” written into its distribution guidelines. Other people are getting shots by volunteering to work at vaccine distribution sites, and we think that’s legit. 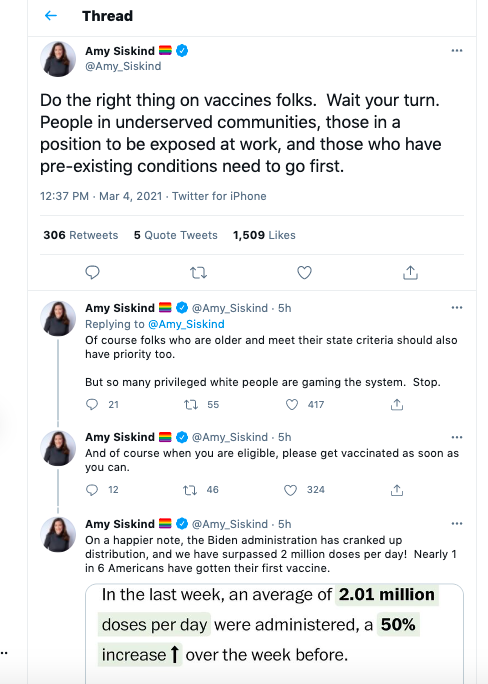 But the world is full of people who aren’t playing by the rules.

The state of Florida cracked down on “vaccine tourism” in January, after a raft of reports that people were traveling to Florida to get shots. Vaccine is distributed on a state allocation basis and having people coming in to get shots in Florida depletes the supply for current residents. (A New Jersey friend just reached out in anguish about her grandparents, who haven’t been able to get vaccinated.) Here is a CBS News story about this phenomenon.

Some even reportedly come from other countries — Canadians, for example, who have homes in Florida.

When we started asking around, there were a lot of people who said “I can’t talk about that.” But some were willing to share stories — without naming names.

A Los Angeles woman said she got her vaccine legitimately by going with a relative —  who had a vaccine appointment and qualifies under the California rules — to a site where she had heard that leftovers were not uncommon. She got what we count as a “legit” shot.

10 shots for his friends

Someone she knows, though, went a different route. A friend of a friend, in the music industry, was given 10 shots in the early going that he was told he could distribute to anyone he wanted, she said. “The person who I who told me about this was like, I stopped speaking to him because this was so unethical,” she said.

Another friend had a family friend who ran some kind of clinic, she said. “And someone noticed that with the paperwork, you could just say that you were a medical worker, and nobody’s checking credentials,” she said. “And so he and all his family got vaccinated.”

She also said: “There’s also one more person I know in New York. People who own restaurants can bring their friends on as consultants. I don’t know if you submit like a sort of decorative or whatever 1099 to show that you have been consulting for that restaurant? But because they’re vaccinating restaurant workers, they were able to do it that way.”

Another woman from the western United States had heard of a lot of people looking for loopholes — and finding them.

She said she had heard of examples on both the East Coast and the West Coast where people had found ways to get vaccinated in indigenous communities, but she didn’t have details on that.

In another case, she said, an employee of a hospital system was able to get vaccine not only for herself as a health care worker, but also for a number of family members — her parents, her in-laws, “the entire family.” Everybody over 16 was vaccinated, she said.

“It’s not kosher,” she said. “None of these people deserve to be vaccinated, according to the rule.

“I know of other people who got vaccinated because their mom is like head of nursing.”

She added that she had seen a friend the other day who had been vaccinated, though she doesn’t qualify by age in their state’s regulations. “I’m like, ‘What do you mean? You’re in your 40s and 50s?’ And they’re like, ‘Oh, come on, don’t you know a doctor?’ They were vaccinated, and their 20-year-old daughter was vaccinated.”

She also said a friend reported receiving a phone call that a doctor was offering to vaccinate people — for $2,000. “My friend wasn’t interested so she didn’t ask” for details, she said. “Someone called to tell her that it was possible and see if she was interested.”

She also said people had told her that it was well-known among vaccine seekers that “you can go to an underprivileged neighborhood, maybe South Central Los Angeles, make friends with a pharmacist at a vaccine site and have them put you on a waitlist. If they have leftover vaccines you can get one between 4-6.”

I told her we have heard reports of waitlists in other parts of the country, too, and we’ve written about that as “leftovers” or “standby” programs. In fact, in New York State, the distribution plan written by the Department of Health has rules for distribution of these leftover doses, though the actual practice is hit and miss, from what we have learned.

She replied, “In LA they are prioritizing low-income neighborhoods so there are no pharmacies giving it except there.”

She also knows multiple health care professionals who are not full-time at hospitals or other health care institutions who have either not been able to get vaccinated or have had to go through contortions to get vaccinated — at the same time she has heard of people conjuring up fake W2 tax documents and using them to “prove” eligibility for vaccines they really are not eligible for.

She also said she knows of a couple in their 70’s who got vaccinated and immediately booked three trips. “They’ve booked flights,” she said. “They’re starting to traveling. I think part of it, too, is a thing of privilege. It’s like, ‘I’ve had enough. I’ve been in my house for a year. I’m going to get a vaccine no matter how I need to get my vaccine. And then I’m going to get my life back. And, you know, damn the torpedoes.'”

In the early going, there was a lot of vaccine bragging on Facebook and other social media, with people proudly displaying their vaccine cards. That occasioned a certain amount of finger-pointing from people who weren’t eligible and wondered how seemingly young and healthy friends were eligible. The vaccine bragging seems to have subsided somewhat. (Social media, as always, provides an opportunity for endless friction and judgment.)

Flying to other states

I myself have two friends who got vaccinated who are seemingly not in the proper order. One is a retired professor at New York University; he got an email saying he was eligible and went right in. (We are aware that big institutions associated with healthcare have had big allocations of doses, and are using them for things that are not strictly “front-line health care workers,” which seems to be the spirit of the distribution plan in New York, not retired professors.) One is a nurse practitioner in Iowa who was on furlough; she also got an email saying she was eligible and went right in. It seems to me that these two are legitimate — both questioned the authorities, and were assured that they are in. Of course, the institutions receiving the vaccine need to use them, and for legitimate and authorized recipients, and of course they will take care of their own first.

But not everyone is legit.

In Florida, two women dressed up as grannies to try to get the vaccine, but were stopped, according to news reports. They were after the second dose, according to reports, so they seem to have made a successful grab for the first dose.

The ABC report included surveillance footage of a deputy who was issuing them trespass warnings after they were nabbed. “‘You know what you’ve done? You’ve stolen a vaccine from somebody that needs it more than you,’ the deputy is heard saying, as the women sit in a car in a parking garage. ‘And now you’re not going to get your second one. So that’s a whole waste of time we just wasted here on this.'”

This is at the same time that people are struggling to find vaccines.

Meanwhile, the New Jersey woman who spent weeks trying to find an appointment for her aging grandfather and his wife in Florida ultimately had success. I pointed her toward a Facebook group that I had heard of that has reliable info, part of the Facebook-Twitter-volunteer vaccine-finder network. She emailed on Sunday: “The county finally called. Wouldn’t help him because of his penicillin allergy.  I followed Jackson Medical Center on Twitter and they posted they would open appointments ‘soon’ and I was able to snag one for my grandfather. We then managed to get the fire department to do an ‘at home’ shot for his wife as she receives county social services and was eligible. What a mess but he has 1 of his 2 Moderna shots and she will get something on Tuesday.  Thank you for your help. That Facebook group is who told me to follow Jackson medical on Twitter for the alerts. Huge help!”

On the backdoor side, other people our western United States source knows of have flown to Montana, or Utah.

“You know, people who have a second home in another state, then you’re a resident,” she said. “It’s not even coloring between the lines. It’s like there are no more lines. ‘Oh, Joe did it that way? Sure. I’m going to go do it that way. Oh, that door closed? I’m going to open another door.'”