Coronavirus (Covid-19) and the schools: How the Delta variant invaded an elementary school classroom 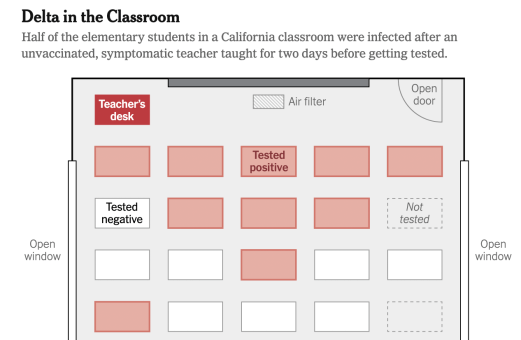 “An unvaccinated elementary schoolteacher infected with the highly contagious Delta variant spread the virus to half of the students in a classroom, seeding an outbreak that eventually infected 26 people, according to a new report from the Centers for Disease Control and Prevention,” Sabrina Imbler and Emily Anthes write for The New York Times. “The unusually detailed study, which comes as school districts across the country reopen, seems certain to intensify the debate over vaccine mandates in schools. A handful of school districts, including New York City, have already announced vaccine requirements for teachers and staff. Others may follow suit now that the Food and Drug Administration has granted full approval to the Pfizer-BioNTech vaccine. ‘The most important thing we can do to protect schoolchildren, particularly those too young to be vaccinated, is to make sure the adults in their lives, including teachers and school staff, are vaccinated,’ said Jennifer Nuzzo, an epidemiologist at Johns Hopkins University, who was not involved in the report. The study was one of three new C.D.C. reports that focused on schools or children. In another study, researchers found more evidence that schools can be low-risk environments when they combine several precautionary measures. But that research was conducted before the Delta variant began spreading. A third report focused on vaccination rates for teenagers. Half of all 12- to 17-year-olds have received at least one dose of a coronavirus vaccine, the White House announced on Friday. But the new study revealed that vaccination rates for this age group remained highly uneven across the country.” Sabrina Imbler and Emily Anthes, “How the Delta Variant Infiltrated an Elementary School Classroom,” The New York Times.