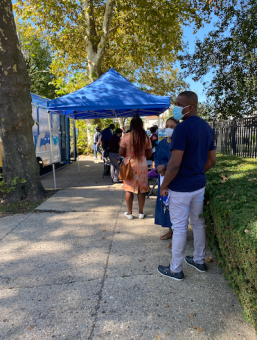 An interesting change is taking place with the demand for the three Covid vaccines approved for use in the United States.

We vaccinated a whopping 213 people on Sunday, Oct. 24, in the vaccine van we are using in the grant program we’re working on in Queens. The Johnson & Johnson one-shot vaccine has surged in the last week — we think because of the new mandates requiring people in  New York City to get vaccinated or lose their jobs.

Requests for Johnson & Johnson went up from a few a day in September, when we launched, to 109 on Oct. 24 at our van in Queens Village, in the southeastern part of the borough.

Pfizer’s vaccine is also seeing a lot of demand, with 12- to 17-year-olds  and, soon, it is predicted, younger children eligible. (The expected date for 5-to-11-year-olds seems to be early November.) Pfizer had 104 vaccinated at our van on Sunday.

But Moderna’s vaccine is increasingly hard to find, for people who want either the first series or a booster. We first noticed that when a Chicago woman told us in mid-October that she was having trouble finding the Moderna third shot, for immunocompromised and other people with pre-existing conditions. Now in New York City, several of us have had personal experiences of a difficult search for the Moderna booster since it was approved for over-65 and other categories by the Centers for Disease Control and Prevention on Friday.

This is interesting partly because Johnson & Johnson has long lagged the other two. “As of mid-October 2021, more than 15 million Americans were fully vaccinated with the J&J vaccine, compared to more than 69.6 million who received Moderna and 104.6 million who received Pfizer, according to the CDC,” Kathy Katella wrote in a recent Yale Medicine piece about the three vaccines.

Note: The 213  people  who got vaccinated at our van on Sunday is up from 114 last Sunday and a steady 60 or 70 every Wednesday and Sunday since we started this on Sept. 23.

In Queens, many people who tell us they are seeking to comply with a mandates — get vaccinated or lose your job — prefer the Johnson & Johnson because it’s “one and done.” They may face income loss immediately, and the delay of 3 weeks between the two doses of the two-step Pfizer regimen may not be desirable.

Many people asking for Johnson & Johnson are white, our folks say.

One of our staff members asked if a lot of people concerned about mandates were white people, and another said “The ones I’ve met, for sure.”

Why are people asking for Pfizer? Our folks say, “Pfizer folks think Pfizer is better.”

We are doing this work in Queens Village as part of a grant called the Vaccine Equity Partner Engagement program, with The Fund for Public Health in NYC and the NYC Department of Health and Mental Hygiene, funded by Centers for Disease Control money. Our three media organizations partnering in the grant are Epicenter-NYC, ClearHealthCosts and TBN24.

Read more stories of people getting vaccinated at our Queens site here, in our earlier story about the first vaccine van we ran, and here in a follow-up.

Read even more from our partner, S. Mitra Kalita, the publisher of Epicenter-NYC and our partner on the grant: “The 7 truths about vaccines right now.” >

Finding a Moderna shot is proving difficult even for those who have “mastered” the art of vaccine booking.

Kalita  said it took her an hour last week to find boosters for herself, her husband, parents, brother and sister-in-law. Kalita spearheaded an effort over this past year to help nearly 6,000 New Yorkers access vaccine appointments and considers herself a bit of an expert on the process.

“So just imagine what it will be like for other people,” she said. “My phone and email are filled with people trying to make sense of the guidance, but also how to act on it.”

She says the Rite-Aid website on Friday night was down, likely a result of being overwhelmed by the C.D.C.’s clearance of booster shots for all, as well as the approval to “mix and match” among different vaccines. She and her husband, Nitin Mukul, also the co-founder of Epicenter, got their shots on Sunday night at a CVS in Forest Hills, Queens, even though there are literally dozens of providers between her home in Jackson Heights, Queens, and where she ended up.

“We are lucky here in New York City,” she told ClearHealthCosts. “I had to book my family members in New Jersey into next week, and several miles from their home. I’m also worried that we are back to needing the internet to book these. Every pharmacy I called that has Moderna will not do walk-ins.”

In Chicago, in contrast, “I haven’t been seeing too many people struggling to find booster appointments,” Benjamin Kagan, founder of Chicago Vaccine Angels, said in a text interview. “Most pharmacies have many appointments open online, in addition to taking walk-ins.

“It is incredibly frustrating to me that with many vaccine mandates, people can opt to test instead of getting the lifesaving shot, when it is readily available at many sites,” said Kagan, 15, a sophomore in high school, noting that Chicago’s vaccine mandates are weak and porous. Chicago’s mayor tried to institute a mandate for the police, he noted, but the police union told its members not to comply, and she will have to fire “about one-third of the police force” if she follows through, he said.

Getting the same type they had before

Kalita said the pharmacist administering her shot recounted a very busy day Sunday with people coming from as far away as Long Island in search of a Moderna shot. Kalita said that is likely a function of people feeling comfortable getting the same type of vaccine they got earlier, and the slight advantage studies have shown Moderna has in fighting the Delta variant.

Epicenter, she said, helped neighbors access the vaccine during days when supply was much more limited, and a large portion — she estimates at least a third — received Moderna because that was the vaccine administered by Affiliated Physicians, a health care provider that set up in high schools and clinics across the city.

“They are amazing,” said Kalita. “I found their booking to be easier to group large families and restaurant staffs together. I was also able to make changes to bookings, which was impossible in the Byzantine systems set up by others.” Kalita said she has been mobilizing volunteers for what she predicts is “the coming surge” thanks to boosters, mandates and the likely expansion of vaccines to those ages 5 to 11.

“We know vaccine access and equity is an issue and the confusion around Moderna and boosters hardly helps the populations who are still most vulnerable,” she said. She also decried what she says was a “culture of stupid hot takes by media” on Pfizer being a better vaccine. (She’s right; here’s an example.)

“There’s at least one message the government has been consistent on: The best shot is the one you can get fastest.”

What’s on our van

When we were setting up our van arrangements with the New York City Test and Trace folks, part of the New York Health+Hospitals empire, they asked us what vaccine we wanted. They said probably two, not all three.

From our perspective, it was easy: Johnson & Johnson is one and done. Pfizer is for people 12 and up, and soon to be 5- to 11-year olds as well. Moderna is for people 16 and up. So there would be more willing arms with Pfizer than with Moderna.

Our next events: Wednesday, Oct. 27, and Sunday, Oct. 31. All include vaccines and Covid-19 testing.