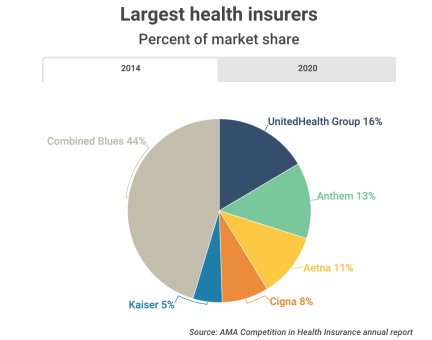 Most health insurance markets in the United States are highly concentrated, meaning that millions of Americans have limited health insurer options,” Michael Popke wrote on Benefits Pro. “That’s the key takeaway from a new American Medical Association (AMA) report released this week. The 2021 version of the organization’s “Competition in Health Insurance: A Comprehensive Study of U.S. Markets” analyzed market concentration and health insurer market shares for 384 metropolitan statistical areas (MSAs), as well as all 50 states and the District of Columbia. For the first time, the study also presented national-level market shares for the country’s 10 largest health insurers. ‘As merger rumors involving health insurers swirl, the prospect of future consolidation in the health insurance industry should be more closely scrutinized given the low levels of competition in most health insurance markets,’ AMA President Gerald E. Harmon said in a statement. ‘For two decades, the AMA study has been helping researchers, lawmakers, policymakers, and federal and state regulators identify markets where consolidation involving health insurers may cause competitive harm to consumers and providers of care.’ The study notes that average market concentration increased between 2014 and 2020. ‘These markets are ripe for the exercise of health insurer market power, which harms consumers and providers of care,’ the authors write. …