How much do medical records cost? Guest post by Amy Gleason 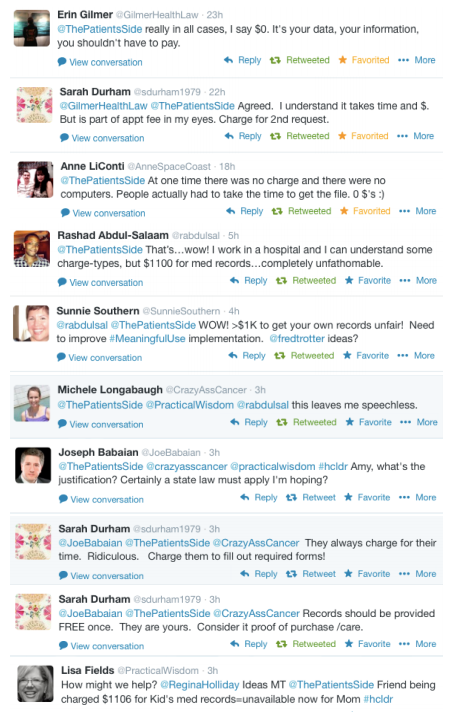 SUMMARY: You own your medical records, right? Not so fast. If you want to take records from one place to another, you need to fill out forms, jump through hoops and — sometimes — pay lots of money.

Amy Gleason became a patient advocate after her daughter Morgan was diagnosed with juvenile dermatomyositis. Amy Gleason is also the the chief operating officer at CareSync, a patient engagement platform that helps patients and their families.

Rare disease moms have to stick together. There aren’t many people in the world who really understand our lives. So, when you make things difficult for one of us, we rally around each other to help.

Recently, another rare disease mom tried to get her 6 year old’s records from the hospital and doctors where she gets seen. Shockingly, she got a $1,106 bill!

Her daughter was seen by the hospital and doctors, there were fees charged and paid for the services, and now that she wants to understand what happened better and wants to have a record of it for future use, she is charged an extra ONE THOUSAND dollars.

Another rare disease mom also is struggling with the same hospital for a $600 bill. I was also charged hundreds of dollars to get Morgan’s records from this SAME hospital.

Since I work at CareSync, we usually are able to help people with these problems. We help organize their records and give them tools to not only store them but to share them in meaningful ways with family and other doctors. However, every once in a while, we run across situations where healthcare tradition and bureaucracy show the true craziness in healthcare.

Each state can make up their own rules for medical record fees, and HIPAA requires that the patient be given access within 30 days. However, HIPAA allows state rules on the fees. I would argue that charging someone $500, $600, and especially $1,106 for their medical record is not really making the records accessible to the patient.

CareSync has tried to help in these cases, and our Chief Medical Officer even requested the records and even called the hospital himself multiple times to try to get some reasonable outcome. The lowest they would go to was nearly $600 and they will continue to charge for each single visit afterward for an approximate $28 per visit (includes a “handling fee”).

I posted this on Twitter this morning, and there were quite a few great tweets in support of this. I understand that it is work on the part of the hospital or doctor, but isn’t that work part of the fee that is charged the patent and her insurance?

As you can see, there were quite a few different people posting similar thoughts here. So, what can we do? Any other ideas? How do we solve this for all patients? It is so important for patients to have access to their information.