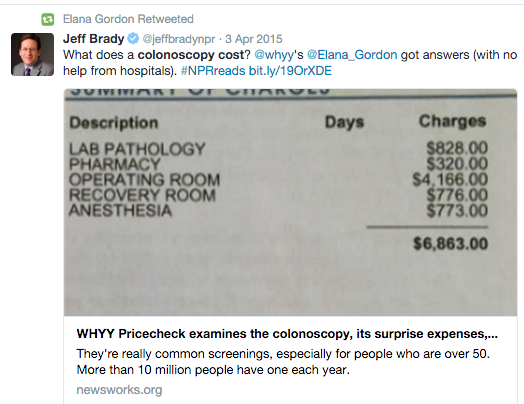 Aren’t all colonoscopies free now? No. While the Affordable Care Act includes free preventive procedures like colonoscopies, we’re hearing more and more that people are being asked to pay, from community members in  our partnerships with public radio stations KPCC in Los Angeles, KQED in San Francisco and WHYY in Philadelphia. We don’t know anyone who keeps overall records on how big this problem is, but we can tell you this: “How much does a colonoscopy cost?” is one of our busiest posts.

Under the Affordable Care Act, services recommended by the U.S. Preventive Services Task Force are covered with no out-of-pocket payments. For people between 50 and 75, the task force recommends screening for colorectal cancer using stool testing, sigmoidoscopy or colonoscopy. According to the law, if a polyp is discovered and removed during a screening colonoscopy, there will be no charge, because that’s considered part of a routine colonoscopy.

So: screening colonoscopies are supposed be free if you’re in that age group. Diagnostic colonoscopies (in which the provider is looking for a diagnosis for something like stomach pain) are not free; they’re a “sick person” visit.

More than 15 million colonoscopies are performed annually in the United States. Roughly half of them are screening colonoscopies. How many of those incur some charge? A fair number, anecdotally.

Prices are all over the map

There are links to our detailed price lists in this previous post. Here are examples from our  community members’ reporting:

Charge of $3,200; individual paid $370.41: “$3,200 was billed … and $2,331 was the ‘allowed amount’ under my health care plan  …. However, I received a separate bill from my doctor who performed the procedure for $800 and the ‘allowed amount’ by my insurance was $370.41 which went to my deductible….   because they found a polyp the procedure coding changed from preventive to diagnostic, therefore, I was no longer covered under preventive care….”

Charge of $8,000; individual paid $800: “I spoke to the CEO of the surgical center. He agreed the fee was high but said there is a standard list of prices that he and most centers adhere to.”

Charge of $5,104; individual paid $1,650: “I called Kaiser before the procedure to inquire how much it would cost me…. They were vague and would not give me a fixed price, but I was told if there were no special circumstances (in the end, it turned out there were none), it would be around $600 on my plan. Imagine my surprise when I received a bill for $360 for Professional Services, and $1,290 for the hospital bill (my share of each), for a total of $1,650 out-of-pocket. I am on a high-deductible plan, so I paid for 100% of my share.”

Charge of $2,722, insurance paid $743, individual paid $1,979: “I did not ‘shop around’ when I did this. I’m embarrassed to admit that it hadn’t occurred to me to do that. This price check concept is a wonderful service and eye opener for the public. Many thanks.”

So what causes this? How can this be true?

We’ve heard a handful of explanations. To be sure, a preventive or screening procedure is supposed to be free, and a diagnostic one (a sick person visit) will not be.

1. For some insurers, we are told, if you had a screening colonoscopy before and you had polyps removed, all subsequent colonoscopies will be considered diagnostic and not preventive. In pretty much every one I’ve heard of, something was removed and tested, so that means the first one is free — and none of the rest are.

So you might expect a screening colonoscopy, and learn only later that the insurance company considers it a diagnostic procedure. The letter to me from my gastroenterologist at right doesn’t suggest there will be a charge — but if I had an insurer who follows this practice, it would be an invitation to a sick-person visit and a hefty bill. 2. Some insurance companies will not cover the facility fee, or will cover only part.

3. We have heard of several cases in which the anesthesiologist was out of network, and billed accordingly. So you might have an in-network doctor who uses an out-of-network anesthesiologist, which you learn of only when you get the bill.

4. Billing confusion: “The most common scenario is when it is billed as diagnostic rather than preventative,” Rebecca Palm, Chief Strategy Officer & Founder of copatient, a consumer healthcare expense management company (www.copatient.com) wrote in an email answer to my question about this. “This can happen if the patient has had a previous test that indicated that a colonoscopy should be performed, or if the patient has symptoms that the provider is trying to diagnose.” She added, “Some providers will also code a colonoscopy as diagnostic if it begins as a preventative screening and, while performing the procedure, they discover and remove a polyp.”

5. That mysterious thing that happens in claims processing.  We hear all the time that providers (doctors and hospitals, for example) have to follow different rules for different insurers that may be confusing, or may change.

Palm said: ‘The way that insurers process these codes varies widely. Some insurers require certain coding modifiers to pay the claim as preventative, while others don’t have the capability to distinguish between those codes. If this happens, you can request that the provider code the procedure differently or that the insurer process the claim as preventative based on the coding rules.”

A friend who knows about this process adds: “If there’s a problem & it’s not clear, it has to be processed as diagnostic & not preventive. I’ve fought claims on that for people even on something that wasn’t straightforward, something like the doctors wanting additional images or views or unclear pictures because of dense tissue in the body made them less than clear; where an immediate problem isn’t exactly found & all of it has to be considered diagnostic still.”

So yes, the coding part is mindnumbing. If you don’t believe us, look at this article on the subtleties of coding.

The Affordable Care Act is not the cause of this; it’s the product of unintended consequences.

Preventive screenings (including colonoscopies) were made free under the A.C.A. Providers of such screenings, of course, saw an opportunity for increased business. These screenings are suddenly quite heavily marketed (see my gastroenterologist’s letter above).

But no one tells the patient (actually, we like to call them people) that the prices might vary significantly. Here’s our partner Lisa Aliferis from KQED public radio in San Francisco talking with Maribeth Shannon of the California Health Care Foundation about the topic.

We’ve written about this before, here, for example;  it seems to be growing as a problem.

As we always say, know before you go. As a preliminary step, know what’s in your insurance plan.

Hospitals and other facilities do not police this as carefully as they might in many cases, and after the fact — even with a huge argument — it’s not always possible to get covered. Many insurers will take the position that it’s your fault, even if you did everything you could to protect yourself. But your case will be stronger if you ask up front, get commitments and assurances in writing, and take names and phone numbers.

Also, we don’t give medical advice, but our friends over at the American Board of Internal Medicine Foundation do, via their Choosing Wisely campaign. Here is a fact sheet on colonoscopies from them.

No, you cannot be charged for a pre-colonoscopy consultation after a screening colonoscopy.

No, you cannot be charged for any lab tests after a screening colonoscopy.

Other resources: Here’s a National Women’s Law Center fact sheet on what to do if you think you’re being charged when you shouldn’t be.

Here’s a Kaiser Family Foundation paper with a set of scenarios for coverage, dating to 2012 (some clarifications have been issued since then, but this is pretty thorough).