How much insurance deductibles have increased in employer plans: Money 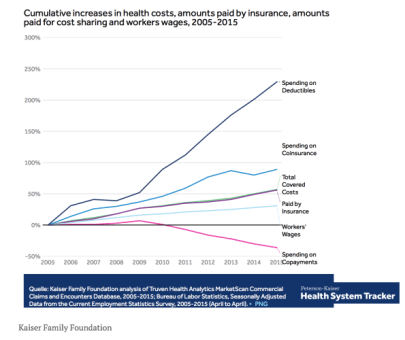 “Workers with employer-sponsored insurance have seen their deductibles and other out-of-pocket expenses rise at a rate far outpacing increases in wages over the past decade, according to a new analysis from the Kaiser Family Foundation,” Alicia Adamczyk writes over at Money magazine. “The report found that the average amount enrollees paid toward their deductible rose a whopping 229%, from $117 to $386, between 2005 and 2015. A separate report from Kaiser found that the average deductible for people with employer coverage rose from $303 to $1,505 between 2006 and 2017. Premiums are also on the rise. Wages, on the other hand, rose just 31% on average during the same period, the report notes. In the graph below, you can see how deductible increases have risen over the past decade compared to other types of health care costs. Kaiser Family Foundation  Kaiser’s report looked at what families paid out-of-pocket for medical services covered by their employer-sponsored insurance plans between 2005 and 2015, based on benefit claims compiled by the Truven MarketScan Commercial Claims and Encounters Database, which contains claims information on millions of individuals. What does this mean? Employees are taking on more of the costs for health care and paying more than they did in previous years. 24% of enrollees in employer plans now pay over $1,000 out-of-pocket each year, compared to 17% who did so 10 years ago.” Alicia Adamczyk, “Why your health care costs are out of control, in one graph,” Money. The original Kaiser work can be found here.