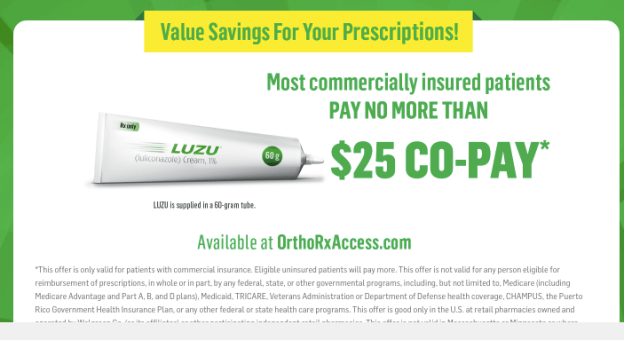 “Ever hear of a drug called Luzu? For athlete’s foot?”

The conversation started in the gym, where a woman who knows I do health care costs had a story to tell.

I said, “I bet you’re going to tell me it’s really expensive,”

What happened: Her podiatrist recommended this medication for athlete’s foot. The podiatrist also pointed her toward a coupon on the site of the manufacturer, Ortho Dermatologics (formerly Valeant — they changed their name, perhaps because of scandal).

She went to CVS to get it. CVS does not accept that coupon, so the price would be $432.

She then took the coupon to Walgreen’s, where the price would be $75, because they do accept the coupon.

I said, “YOu know there are over-the-counter medications for athlete’s foot, right? People have been getting athlete’s foot for thousands of years. No Luzu needed.”

She went on to say that the Luzu medication was out of stock at Walgreen’s, and not back in stock until Tuesday.

She said she wouldn’t. And then she speculated that her doctor might be getting a kickback from the manufacturer to prescribe the drug.

This medication is one of a number of over-the-counter and prescription medications for athlete’s foot. It apparently is being sold as faster than others. and therefore superior because patients won’t stop taking it over the course of treatment.

Here’s a K-Mart generic for clotrimazole, over the counter at $3.99. It’s not the same medication, but this is usually the first stop for athlete’s foot — an OTC medication for not toomuch money.