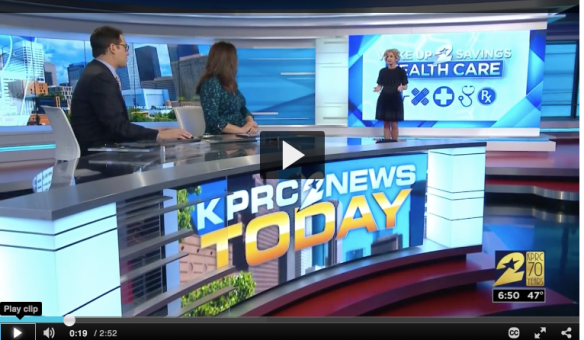 We were featured in a TV news spot by Amy Davis at KPRC-TV, Click2Houston, this morning. Davis did  a mini-demo of the site, as part of the series “Wake Up to Savings.” She talked about how health care pricing is like a black box, but we’re here to help. Watch here.

Our traffic on the site surged five-fold. This was a little unexpected — though we know that health costs in Texas vary widely. Also, there are a large number of uninsured people in the state, and a great amount of economic disparity, which generally means that a lot of people are really interested in health costs.

“Stories like this are literally why you are worth your weight in gold KPRC2 Amy Davis, thanks for everything that you do. :)”

“It’s amazing how the different the costs are due to the location/hospital. I had two separate births at St. Luke in The Woodlands even with insurance we had to pay out of pocket $3000. My last birth we were self pay in Conroe & we had some extra things that took place that the other pregnancies didn’t have. due to a condition. The original bill was $18,000, but because we were self pay it was cut down to $2,200 🙀 the care & facility was just as good.”

“Too bad I have Memorial Hermann insurance 😭”

“KPRC2 Amy Davis, you are everyone’s BEST FRIEND EVER!! Thank you for all your helpful info!!”

“Amy…thank you for your dedication to details. This was an awesome effort to enlighten the public!! #yourock #keepupthegreatjob”

” I found that out when I over heard 2 ladies talking.
So I started calling around an it’s true!
Hospital charges more! If it’s a independently
owned they are usually a lot cheaper.. crazy”