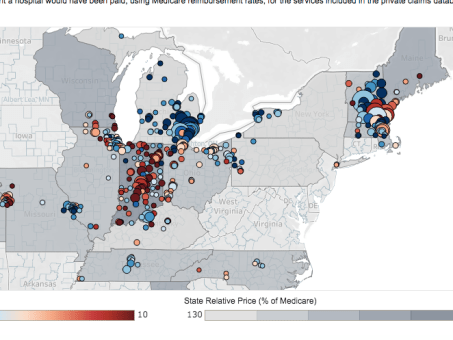 “A recently published analysis of hospital prices shows Georgia in the top third among 25 states studied,” Andy Miller writes over at Georgia Health News about a Rand study that dives deep into high hospital prices nationwide. The original study is here. “The Rand Corp. data uses prices paid by health insurers under employer-based coverage, and compares that spending to what Medicare pays at the same facilities. The sampling is limited, with claims studied representing only a small share of the employer-based insurance market, the authors acknowledge. The Georgia Hospital Association called it ‘cherry-picked’’ data intended to be used by employers and insurers to negotiate lower payments to hospitals. The price analysis was presented at the conference of the National Association of Insurance Commissioners last weekend, as the hospital industry was feeling the jolt of a Trump administration proposal on pricing. The White House proposal, announced last month, would require hospitals to post the prices they negotiate with insurers for just about every service, drug and other resource they supply to patients. Hospitals and insurers are fighting the plan, which is supposed to take effect in January. Other recent research, meanwhile, has pinpointed metro Atlanta as being in the top third of urban areas on health care pricing. In the Rand analysis, the states ranked with higher combined inpatient and outpatient costs than Georgia, among the 25 studied, are Indiana, Wyoming, Maine, Wisconsin, Montana, Colorado and Texas. The report outlined a large discrepancy between prices that Medicare pays and those paid under private insurance. And the analysis said outpatient care costs are a big driver of spending growth. Bill Custer, a health insurance expert at Georgia State University, said the new Rand analysis, while limited, shows a tremendous variation in the prices of outpatient services in Georgia and elsewhere.   ‘Similar services are being priced very differently for outpatient care,’ he said. Higher prices in some areas of the nation have been linked partly to medical provider consolidation, and in some areas to the presence of hospitals with very high consumer appeal, so that insurance networks feel obliged to affiliate with them.” Andy Miller, “Georgia has among highest hospital prices, new review suggests,” Georgia Health News.