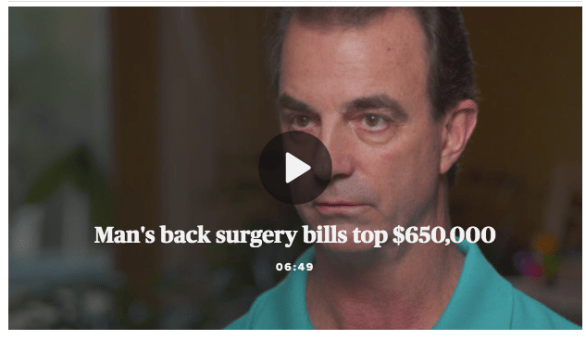 The New York State superintendent of financial services, Linda A. Lacewell, announced that the state Department of Financial Services (DFS) has proposed an amendment to a regulation on New York’s Out of Network Law to protect New Yorkers further from surprise medical bills.

In a statement in a press release, Lacewell said she was taking her action in response to “a recent report of a consumer who received surprise bills totaling hundreds of thousands of dollars that weren’t covered by his healthcare plan.”

The reaction to our Medical Price Roulette reporting with partner CBS News was a follow-up to action by Gov. Andrew Cuomo on Oct. 23, the day our partnership launched, when he contacted CBS to say he wanted to address the problems in correspondent Anna Werner’s report on Frank Esposito, a New York man who had more than $650,000 in bills for emergency surgery that were challenged by his insurer.

New York’s protections against surprise and out-of-network bills are better than those in most states, but they’re still not completely effective.

Consumer protection legislation to extend strictures against balance billing was passed by the Louisiana Legislature just weeks after we launched our partnership with WVUE Fox 8 Live and NOLA.com I The Times-Picayune in New Orleans.

The press release was titled “DEPARTMENT OF FINANCIAL SERVICES TAKES ACTION TO STRENGTHEN CONSUMER PROTECTIONS UNDER SURPRISE BILL LAW” and “DFS Proposes Amendment Requiring Healthcare Plans to Tell Consumers That Emergency Services Could Result in a Surprise Bill and to Notify Consumers When They Deny a Surprise Bill.

“’We are taking this action to strengthen the law so that New Yorkers have all the information they need to avoid surprise medical bills,’ said Superintendent Lacewell. ‘After hearing about − and resolving – a recent issue, we know that if it could happen to one consumer; it could happen to others.’

“Under the amendment proposed today, healthcare plans that receive a claim for the services of a non-participating physician or a non-participating referred healthcare provider that could result in a surprise bill would be required to provide additional notice to the insured consumer. The notice would advise that the insured consumer may receive a surprise bill based on the claim and would include a description of surprise bills and the New York Out-of-Network Law’s Independent Dispute Resolution (IDR) process for surprise bills, as well as instructions on how to submit a dispute, a copy of an assignment of benefits form, and the healthcare plan’s designated addresses for submitting the form. The notice would be included on or with the explanation of benefits.

“The proposed amendment, was submitted to the New York State Register and will be published on October 23, 2019, which begins a 30-day notice and public comment period

“A full copy of the proposed amendment can be found on the DFS website.”